Home > News & Events > Parades & Other Community Events
Jerusalem, Israel: Showing the Beauty of Falun Dafa vs. the Brutal Persecution in China
Jan. 12, 2022 | By practitioners in Israel

(Minghui.org) Activities were held in Jerusalem on November 19, 2021, to make people aware of the persecution against Falun Gong in China. It took place near the Jaffa Gate of the Old City, which has a history of thousands of years and is a destination for tourists. This place is also a holy site for Western religious believers: Jews, Muslims, and Christians alike.

Another goal of the event was to tell people about the amazing effects of Falun Dafa, a mind-body cultivation practice based on the principles of Truthfulness-Compassion-Forbearance. Dafa practitioners demonstrated the practice’s five meditative exercises and people were able to experience them first-hand.

Over a loudspeaker, a practitioner told the story of Falun Dafa, and how the Chinese Communist Party (CCP) has been persecuting the practice for more than 22 years. She called on people to sign the petition to end the persecution, including the CCP’s heinous crime of forced organ harvesting from imprisoned practitioners.

As practitioners demonstrated the serene exercises, many passers-by stopped to watch, take informational materials and ask to hear more about the practice. They learned that Falun Dafa is taught free of charge, and all Dafa materials are available on the internet. 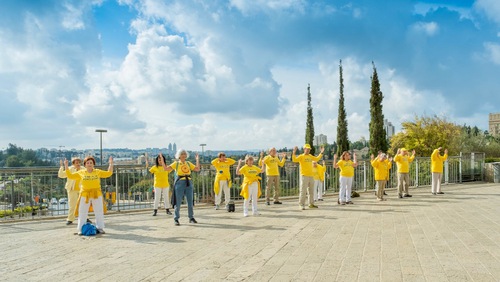 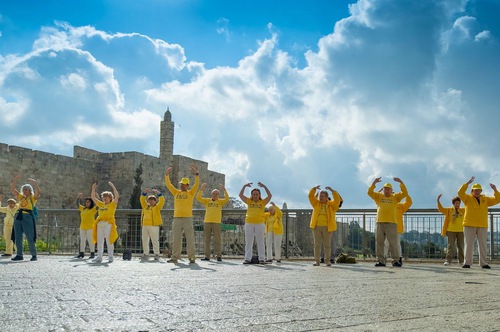 Some people wanted to try the exercises. They asked not only about the movements but about the principles of Truthfulness-Compassion-Forbearance. One of them had a special story.

He shared that he left his home in northern Israel that morning for a spiritual journey after a medical incident that weighed on his health and “shut him down” for a month. He realized that there were deep reasons for all this and that it was related to his hustling and vying for money and leisure. He changed his way of life significantly as a result. That morning he went out for a spiritual journey, following his heart, and with no specific aim. He saw the practitioners when he approached the area with his car and stopped to join them. This seemed to be a predestined relationship. 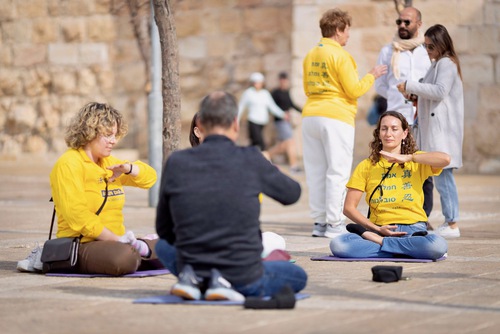 The practitioners felt that people were drawn to the positive energy. An elderly man shared that he had been raised on similar moral principles. From childhood, he used to be considerate and benevolent and did not return a blow when he was hit.

A woman who signed the petition said that unfortunately, the suppression methods of the Chinese regime are spreading to the rest of the world, too.

Another woman came and stood by the table with the informational materials. One of the practitioners remembered this woman from a prior activity. Back then this woman was excited to hear about Falun Dafa, but said she had no time to practice, as she had to take care of her disabled son. Nevertheless, it was clear that she was drawn to the practice, and she said that she felt the positive energy just by being near the practitioners. 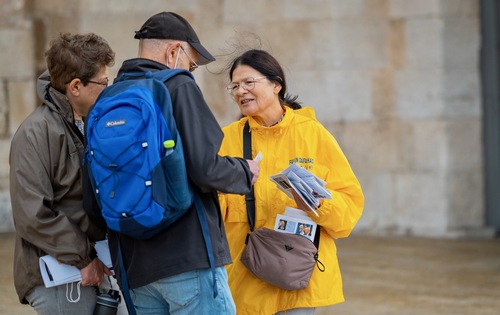 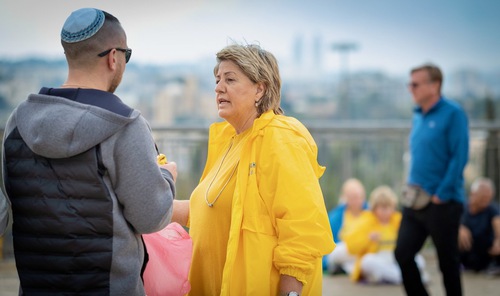 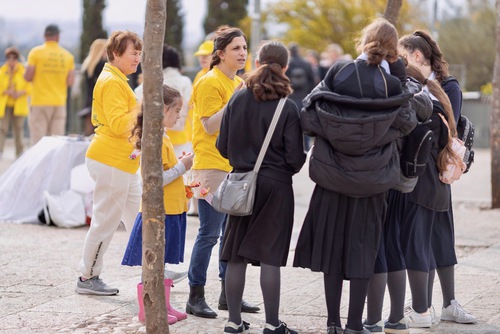 Handing out flyers and talking to people 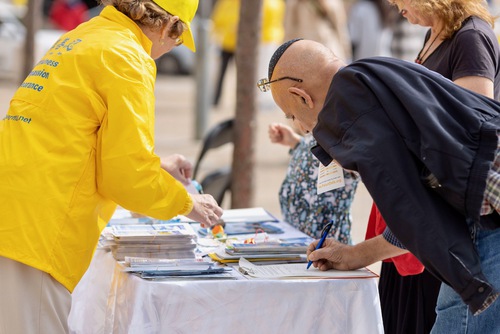 Falun Dafa (also known as Falun Gong) was first introduced to the public by Mr. Li Hongzhi in Changchun, China in 1992. The spiritual discipline is now practiced in over 100 countries and regions worldwide. Millions of people who have embraced the teachings, which are based on the principles of Truthfulness, Compassion, and Forbearance, and learned the five exercises, have experienced uplifted health and well-being.

Jiang Zemin, former head of the Chinese Communist Party, perceived the spiritual discipline’s growing popularity as a threat to the CCP’s atheistic ideology and on July 20, 1999, issued an order to ban the practice.