(Minghui.org) Today's news from China includes incidents of persecution that took place in 15 cities or counties in 10 provinces, where at least 36 practitioners were recently persecuted for their belief. 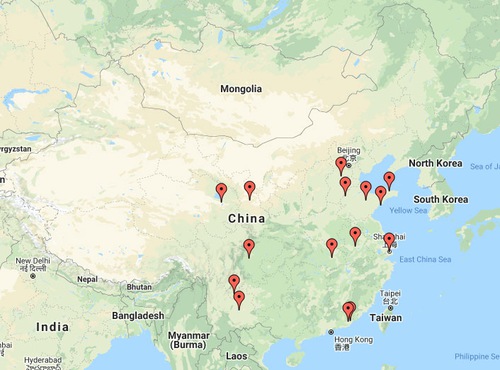 Mr. Mo Xinzhong was arrested by officers from the Gaotang County Police Department on May 30, 2021. He has since been held in the Gaotang County Detention Center. His case was submitted to the Dong’e Procuratorate. Prosecutors met Mr. Mo and told him that he would be sentenced to four years in prison if he pleaded guilty, or over seven years in prison if he pleaded not guilty.

Ms. Lu Zheng’s pension has been suspended since March 2021. She mailed an administrative complaint to the Shanghai City Third Intermediate Court on August 16, 2021, requesting that she receive her full pension each month.

She went to the court and inquired about the case status on September 6. The court clerk said, “The social security bureau has the right to suspend your pension.” Ms. Lu said, “Based on Document No. 44, suspending my pension is illegal. Furthermore, denying a complaint should be put in a written statement.” When the clerk replied, “No.” Ms. Lu said, “Please print what you just said.” The clerk refused.

Three siblings, Mr. Liu Jinguo, Ms. Liu Jinzhen, and Ms. Liu Ling, were repeatedly harassed by the village Chinese Communist Party (CCP) secretary in August 2021. The secretary pressured and threatened them to sign the three statements, renouncing Falun Gong. They refused. They were afterwards harassed numerous times by the secretary and people from the town government, Political and Legal Affairs Committee, and the police. When they were ordered to sign the three statements, they refused.

The three siblings were arrested separately on September 1, 2021 and held in a brainwashing center, where they were threatened, humiliated, and pressured. They were released on September 8.

Ms. Wang Xiaohui and Ms. Liu Xiaolian were arrested and taken to the Cuiwei Police Station on the morning of September 13, 2021, after someone reported them when they were talking to people about the persecution of Falun Gong in a supermarket. Ms. Wang’s home was ransacked. Her husband went to the police station and appealed for her release. The police took both practitioners to the Tongji Hospital after 9:00 p.m., and had them undergo physical examinations, the prerequisite for sending them to a detention center. After 11:00 p.m., an officer called Ms. Wang’s husband and said they told her work unit to take her home. The husband called her boss after 12:00 a.m. The boss did not get the message, but agreed the work unit would send someone to take her back in the early morning of September 14.

Ms. Shen Yanqiao was arrested and is being held in the Wuhan City No. 1 Detention Center. When and why she was arrested are unknown.

Mr. Mi Yuan of Baoding City was arrested by officers from the Yaoshan Township Police Station, Shunping County, on September 13, 2021.

Ms. Gong Dianmei’s home was ransacked by two officers on the evening of September 2, 2019. The officers photographed her, and confiscated her Falun Gong books, writings, and materials.

Ms. Yang Lanying, 52, was arrested at home by officers from the Domestic Security Division on the afternoon of August 31, 2021. Her computer was confiscated. She is being held in the Qujing Detention Center.

Mr. Song Jipei and his wife, Ms. Ma Jimin, were harassed at home by people from the community, county, and village, including village CCP secretary Shuai Lianhong, on September 11, 2021.

Ms. Jiang Deyuan was harassed at home many times by community clerks on September 12, 2021. She asked one of them his name. He replied that it was not necessary to tell her. She did not let them enter her home.

Ms. Qu Xuemei was harassed at home by Nanjiao Community team leader Wang Guojun and village CCP secretary Luo Jianxiang on September 13, 2021. When Wang aimed his cell phone towards her, she stopped him. They ordered her to sign documents renouncing Falun Gong and threatened her with limiting her son’s education. She did not comply.

Ms. Chen Xiaoling was harassed at home in spring 2021 by village CCP member Chen Mingcheng and three “superior” members. She refused to meet with them. A member threatened her parents that they would keep coming back until they met with her.

Village CCP secretary Miao Qiye led three persons to her home on August 19, 2021. Ms. Chen managed to leave home. At around 9:00 p.m., Miao went to her home again and threatened her.

Ms. Zhao Qingzhen and her husband, Mr. Zhang Youli, were arrested at home on August 24, 2021 and taken to the Baiyin Police Department. Their home was ransacked. Their Falun Gong books and more than 100 copies of flyers were confiscated.

They were interrogated for five hours. Officers repeatedly asked where she got the Falun Gong flyers. They tried to bribe the husband into monitoring his wife by offering him 1,000 yuan. Mr. Zhang refused. Ms. Zhao and Mr. Zhang were released.

Ms. Xu Jianying was tried by the Xinzhou District Court on May 21, 2021. She was arrested by plainclothes officers on the morning of September 13, 2021.

Ms. Hong Xihua was repeatedly harassed by Tangchang Town 610 Office agent Tang Wendong, the village head, and others. Tang led four or five people to her home on the morning of August 30, 2021. They tried to take her to a brainwashing center in Pi County.

She was forced to leave home to avoid further persecution. Tang and others kept calling her village head to check if she returned home.

Ms. Zhang Xiuqin was harassed at home by 610 Office agents Tang Wendong and Gao Yong on August 31, 2021. They tried to force her to sign documents renouncing Falun Gong.

She and her husband were taken away from home by Tao Wendong, Zhang Bo, and two others on the morning of September 2. Tao and others entered her home by kicking the door open, and did not show any documents. They took her and her husband to the Suiyue Brainwashing Center in Youai Town. Four agents operated the brainwashing session. One played TV programs slandering Falun Gong and it’s founder. The other three watched the practitioners. If Ms. Zhang or her husband opened their mouths, the persecutors immediately photographed them. They also forcibly grabbed the practitioners’ hands and made them sign documents renouncing Falun Gong.

Ms. Dai Miaochang was arrested on October 12, 2020. She was tried secretly, and sentenced to a year in prison. She was released on September 10, 2021.

“Miracles Bring Me Back to Dafa”