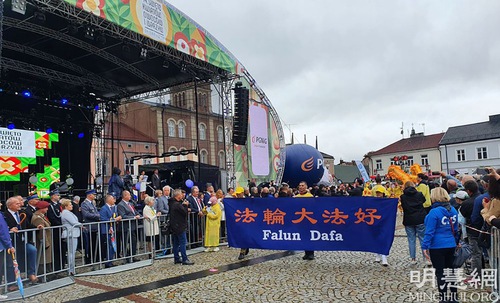 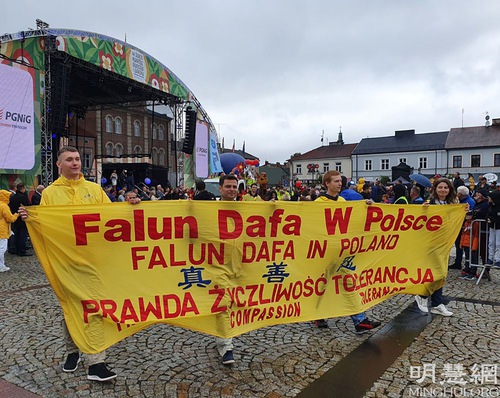 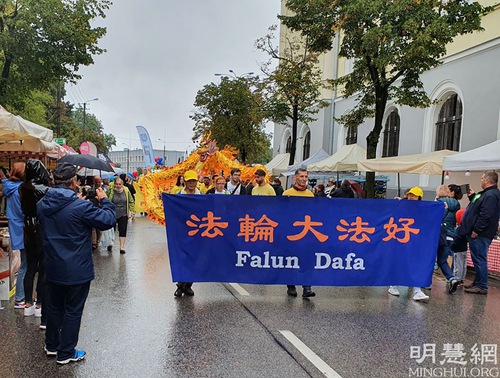 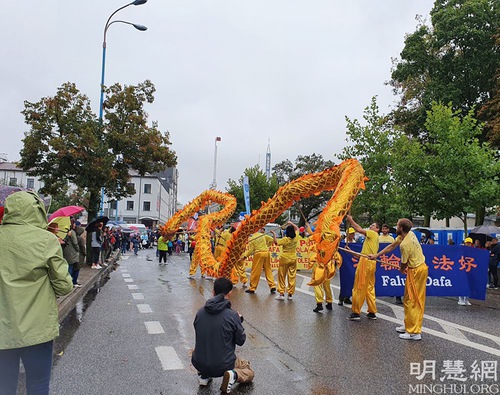 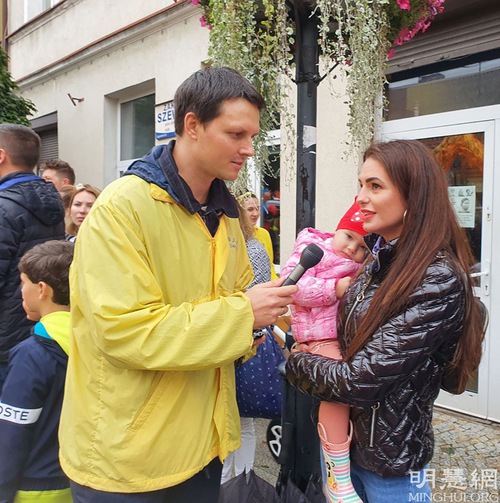 Ms. Kiełczyńska (right), loved the dragon dance performance by practitioners and said she completely agreed with the values of Truthfulness, Compassion, and Forbearance. 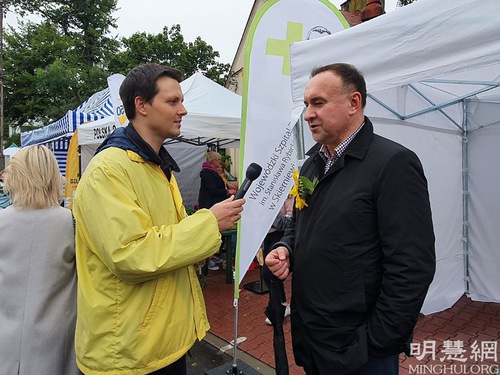 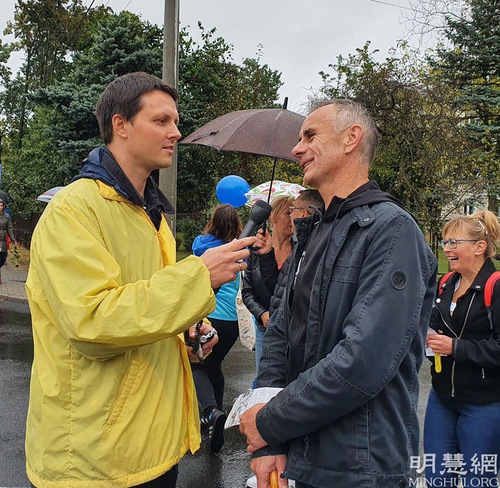 Mr. Sylvester (right) said he felt festive after seeing the dragon dance performed by Dafa practitioners. “The performers live by the principles of Truthfulness, Compassion, Forbearance. In this chaotic world today, such values are all the more so important. I hope that more people will come know the beauty of these principles.”

Despite rainy weather on the day of the parade, both sides of the street were lined with spectators. Practitioners carried banners with the words: “Falun Dafa is good,” “Falun Dafa in Poland,” and, “Falun Dafa – Truthfulness, Compassion, Forbearance.” They also brought a dragon dance troupe. People laughed, clapped, and applauded as the golden dragon continuously wove up and down the streets, drawing expressions of delight and admiration.

Local dignitaries and officials stood in front of the main stage. As the practitioners walked by, each of the dignitaries received information about Falun Dafa and a lotus flower, which symbolizes purity. The event organizers introduced the mind-body practice: “This golden dragon has traveled to Berlin, London, Paris, Austria and now it has flown to Skiernieweice. We thank the Falun Dafa Association in Poland for bringing us traditional Chinese culture.”

A number of parade spectators shared their thoughts about Falun Dafa and the ongoing persecution in China. 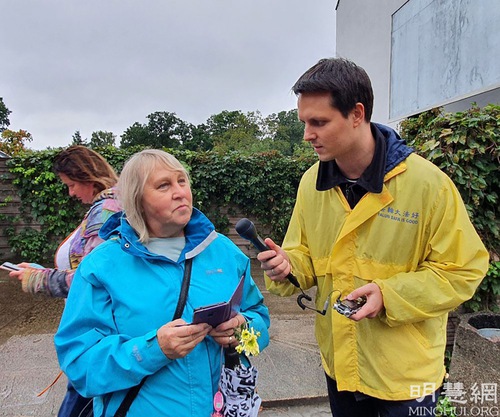 Ms. Mila told a practitioner she loved the dragon performance. She said that the performance was very energetic and brought sunshine as well as joy to everyone despite the rain. She said, “I think Truthfulness, Compassion, Forbearance is very profound. No matter who you are, what belief you have or which country you live in, everyone needs Truthfulness, Compassion, Forbearance.”

She pointed out, “Yet in China, those who follow these standards are persecuted. People who improve their morals are thrown into jail. This is a tragedy that should not happen. Everyone should do something to help these good people gain freedom. I support Falun Gong.” 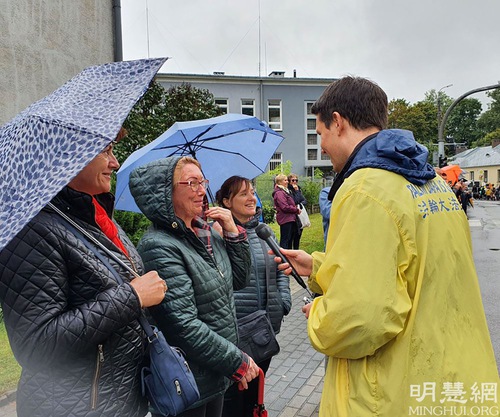 Mr. Andrzej said, “In these troubled times when the pandemic is so severe, people especially need Truthfulness, Compassion, Forbearance. It is unfortunate that this is suppressed in China. I know China does not allow any religious belief. This must change and Communist rule must end. I hope this day will come soon.”

Robert said, “Truthfulness, Compassion, Forbearance are philosophies everyone needs. One should not be persecuted for their belief, absolutely not!”

As he watched the parade, another person remarked, “The principles of Falun Dafa – Truthfulness, Compassion, Forbearance, are what everyone needs. This world lacks such qualities.”

Another person said, “I too dream of the day when everyone and myself have forbearance and endurance.”

A spectator told practitioners, “I think the values of Truthfulness, Compassion, Forbearance are very important, not only to you, but also to Polish people. Without these values, the world today cannot go on.”

Practitioners handed out nearly 3,000 pamphlets during the harvest festival event. People were seen everywhere intently reading the information. Many went to the website using their mobile phones to learn more about the practice and gave practitioners a thumbs up to express their support.

Polish Falun Dafa practitioner Ms. Ewa introduced the practice and said, “Falun Dafa teaches one to follow the principles of Truthfulness, Compassion, Forbearance in cultivating one’s character. I have gained a lot from the practice and I hope more people can learn about Falun Dafa and benefit from it.” 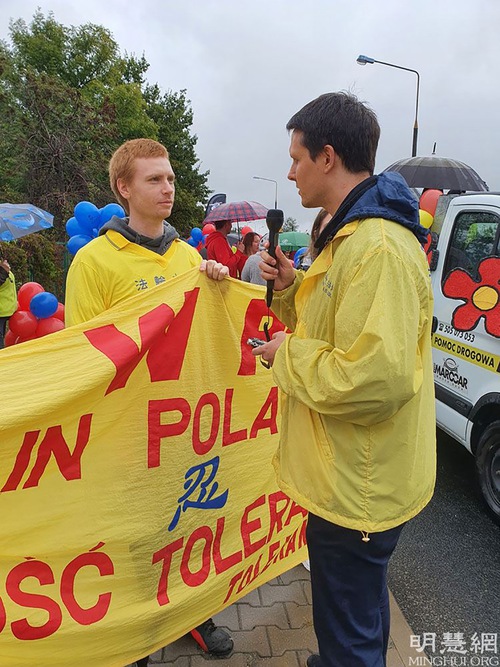 Gabriel (left) began practicing Falun Dafa two weeks ago and was delighted to participate in the parade.

Gabriel lives in Lódz. Two weeks ago, his coworker introduced him to Falun Dafa. Gabriel said, “I am reading Chapter Nine of Zhuan Falun. I especially love the sitting meditation. I can already feel how extraordinary Falun Dafa is, and I can see a lot of my shortcomings.”

He continued, “Falun Dafa is definitely not just about improving physical health. It is a way to give one a healthy spirit. I am delighted to have the opportunity to participate in Falun Dafa activities. I hope to gain more in-depth knowledge of Dafa.”

I Want to Help People Learn About the Persecution in China 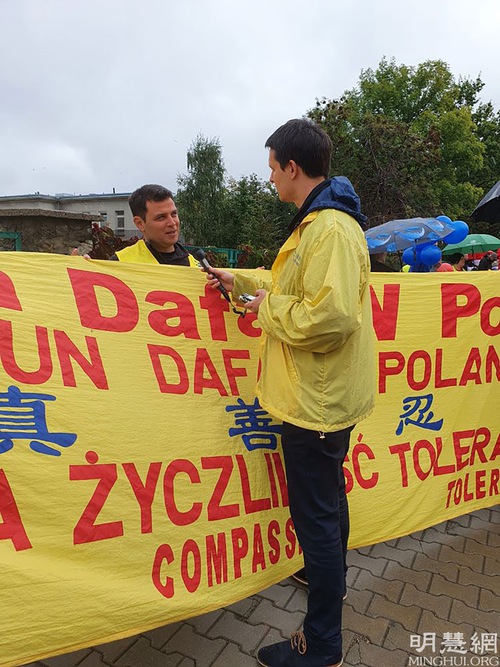 Mr. Andrés (left) from Argentina, happened to be visiting Poland and flew from Warsaw to participate in the parade.

Mr. Andrés, a Dafa practitioner from Argentina, said, “Falun Dafa became popular after it was introduced to the public in China. Millions of people practice it and it is also popular in other countries. Unfortunately, since 1999, the Chinese Communist regime has been brutally torturing practitioners in China.

“This is an excellent opportunity to help Polish people understand how beautiful Chinese culture is and at the same time let them know that the persecution in China is still taking place,” Andrés said.

Falun Dafa (also known as Falun Gong) was first introduced to the public by Mr. Li Hongzhi in Changchun, China in 1992. The spiritual discipline is now practiced in over 100 countries and regions worldwide. Millions of people have embraced the teachings—which are based on the principles of Truthfulness, Compassion, Forbearance—as well as the five gentle exercises and experienced uplifted health and well-being.

Minghui.org has confirmed the deaths of thousands of practitioners as a result of the persecution over the past 22 years, though due to the difficulty in getting information out of China, the actual number is believed to be much higher. More have been imprisoned and tortured for their faith.