(Minghui.org) With the 2021 Chinese New Year arriving on February 12, two brothers in Sweden want to wish Falun Dafa's founder, Mr. Li Hongzhi, a Happy New Year. Having greatly benefited from the ancient meditation practice and its principles of Truthfulness-Compassion-Forbearance, both brothers are grateful for all the blessings they have received.

Ilias and his older brother Michail moved with their parents from Greece to Sweden when they were young. They are successful businessmen and manage their family businesses—a specialty restaurant and a club. Many locals know they are good people, easygoing and kind.

After Mr. Li Hongzhi introduced the practice in China in May 1992, he traveled to Gothenburg, Sweden in April 1995 to give lectures. Many Swedish people were keenly interested and several practice sites were established, including one at Linköping.

Located in the south, Linköping is Sweden's fifth-largest city. Ilias first heard about the practice in October 1998. “When my friend visited me he brought a copy of Zhuan Falun (the main teaching of Falun Dafa). All that afternoon and evening we talked about self-improvement and cultivation practice. I also learned all five Falun Dafa exercises,” he recalled, “It was a wonderful experience, as if I had been waiting for this all my life!”

Being introduced to Falun Dafa was especially meaningful for Ilias, who had been on drugs for several years. Tired of the vicious cycle, he attempted to quit many times but to no avail. He once begged the divine to give him a new, true life, and he longed for it. “It was on that day that Falun Dafa awakened my soul—it was a blessing from the divine and I finally found my purpose in life.”

Through reading Zhuan Falun Ilias was very impressed by Falun Dafa's profound teachings. He began following the principles of Truthfulness-Compassion-Forbearance in his daily life, and he learned to treat other people with respect and honesty. He gradually let go of his bad habits of lying and taking drugs. He even quit smoking and drinking. His friends and family were pleasantly surprised that his bad temper disappeared. Even when people criticized him, he was able to tolerate it instead of arguing.

Ilias said that since he began practicing, he lives in happiness and carries a smile. “I think Master saw that I wanted to be a good person and removed many bad things from me. I am so grateful,” he said.

Seeing his brother's positive changes, in 2002, Michail decided to practice. He said the Chinese Communist Party (CCP) spread lots of lies about Falun Dafa. But by reading books and interacting with practitioners, one knows this is an upright, true teaching that guides people towards higher levels. “I feel very fortunate to be a practitioner,” he explained.

“To be a genuine practitioner, one has to follow Falun Dafa's teachings to be a good person,” he added. “This means constantly looking within and improving oneself.” Like his brother, Michail is also a reliable person and works hard. But his biggest shortcoming was his bad temper. He occasionally argued with his wife and daughter. “Looking back, I realized those arguments did not solve the problem—instead it made the situation worse,” he said.

After he began to practice his outlook changed. “Now when I run into something unpleasant, I first calm down. I evaluate my behavior to see where I could have done better,” he said, “This way I can identify my own problems and the troubles disappear as if nothing happened.” As a result, the family is more harmonious and Michail is very grateful. 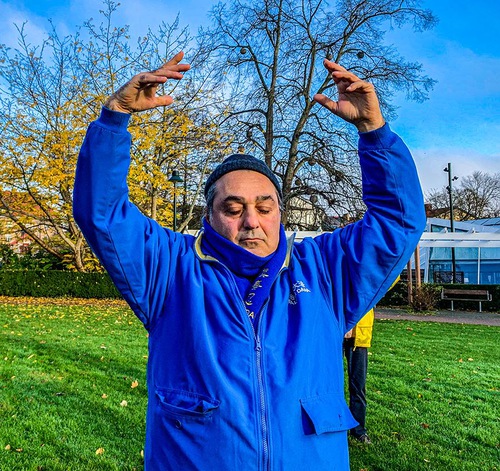 Ilias does the Falun Dafa exercises at a park.

Having witnessed the benefits of Dafa, the two brothers joined other practitioners to let people know about the persecution in China. They participate in events in the city center, put up banners in many places, and published articles in newspapers telling the public how the CCP had been mistreating practitioners in the past 20 years.

When Shen Yun Performing Arts came to Linköping for the first time in 2008, the Chinese Consulate contacted a city official in charge of cultural events and tried to stop the show. As volunteers who helped promote the event, Ilias and Michail were interviewed by a television station, during which they exposed the CCP’s defamatory propaganda to the public. A local newspaper reported this the following day, helping people understand that Shen Yun is a way for people to learn authentic traditional Chinese culture. Opposite to what CCP officials had hoped for, the tickets were sold out two weeks before the show opened.

When the Art of Zhen, Shan, Ren (Truthfulness, Compassion, Forbearance) International Exhibition was held at Linköping in May 2017, the Chinese Consulate once again called city officials, pressuring them to cancel the event, but failed. In fact, a deputy mayor came to the opening ceremony and talked about the importance of defending human rights. Local media also exposed how the CCP tried to block this event, praising the brothers for their courage in standing up against tyranny.

Michail said he uses every opportunity to introduce Falun Dafa to people. He tells people about the beauty of Dafa and how it is brutally persecuted in China. 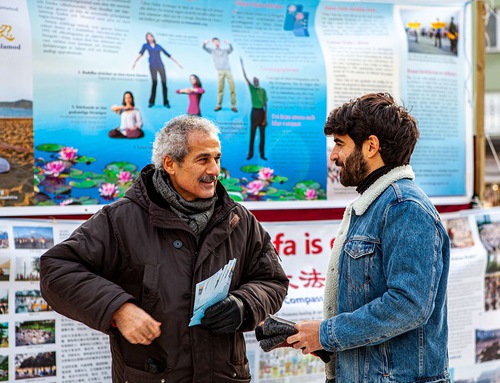 Ilias also likes to tell others about Zhuan Falun. He said the book tells him to always follow his conscience and be a good person. No matter how the CCP slanders the practice, he said the wonderfulness of Falun Dafa is undeniable and this is manifested in tens of millions of practitioners. 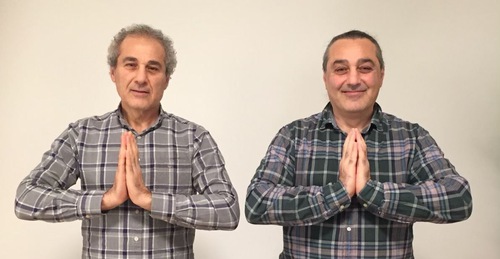 “12 Year-old Girl with Epilepsy Seized Together with Her Parents and Grandmother at 2 AM, Struggles to Cope”