(Minghui.org) Today's news from China includes incidents of persecution that took place in 21 cities or counties in 11 provinces, where at least 48 practitioners were recently persecuted for their belief. 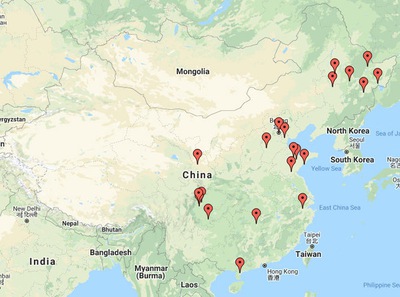 Ms. Wang Shumin was sentenced to four years in prison in the first instance. The Ninghe District Intermediate Court upheld the original verdict on November 9, 2020, after which her family was not sure where she was being held.

After repeated inquires, people learned that Ms. Wang had been taken from the detention center to a facility in Tianjin for brainwashing for one to two months, and then taken to prison.

It was not until January 15, 2021, that her family knew for certain that she had been taken to the Tianjin Women’s Prison.

Mr. Zeng Qinghe went to an elderly practitioner’s home and ran into officers from the Jiefang Road Police Station who were ransacking the place. He was arrested, detained, and released.

Ms. Tang Mingfen, Mr. Xu Jiting, Mr. Wang Guanglu, Ms. Zu Yufen, and Ms. Cai Wenlan were arrested by the police in Xiangyang District on the evening of December 11, 2020. Mr. Wang was released for health reasons. Elderly Ms. Zu and Ms. Cai were taken to a police station and released late at night. The officers confiscated photos of the founder of Falun Gong from Ms. Cai’s home.

Officers ransacked the home of Mr. Zhao Hongzhi and his wife Ms. Dai Xianying and confiscated photos of the founder of Falun Gong. Mr. Fan Longsheng was arrested and taken to the Nanyi Police Station. He was released after writing guarantee statements under pressure.

Ms. Tan Guangmei was arrested on November 8, 2018, and later sentenced to a four-year prison term. She is being held in the Heilongjiang Province Women’s Prison.

Her elder brother Mr. Tan Guangfeng had been arrested and persecuted several times, before his family completely lost touch with him years ago, and they have not since heard anything about him or his whereabouts. Ms. Tan’s parents, in their seventies, are the only ones at home, looking forward to their children’s early and safe return.

However, people from the Bin County Police Department, sub-district police station, and community office have made numerous calls and came to knock on the door to harass Ms. Tan’s parents since last summer. As a result, the two elderly people have been worried all day and afraid to live at home.

Ms. Wang Mei from Northwest Normal University was again arrested around October 20, 2020. There is no information about where she is being held.

Case files of senior engineer Ms. Wang Meihong has been turned over to the Daoli District Procuratorate, Harbin City.

Ms. Xia Jingze, 75, was heading home at around 4 p.m. on January 12, 2021. All of a sudden, residential officer Yang Zhiqing rudely stopped her. He grabbed a small bag she was carrying and searched it.

A wallet and a couple of other items were in the bag. Yang dragged her with one hand and took the phone out of her pocket with the other hand. He did not let her go until after he took her picture.

Mr. Feng Shuangshou from Jinma Residential Community was recorded on video by surveillance cameras when he was posting Falun Gong materials one night in early August 2020.

About two weeks later, police officers located his home and arrested him. The officers took him to the Zhengding Police Department to take photos and sign paperwork. On September 22, the police ransacked his home and confiscated two laptops, a set of Falun Dafa books, and a sound player.

The Taibaozhuang Police Station dispatched two police cars to intercept Dafa practitioner Mr. Chu Qinghua who was selling baked wheat cakes on January 13, 2020. They took him to the Weifang No. 4 Hospital for a physical examination.

Ms. Li Xuefang and Ms. Wu Suqing from Dongjiaba Community were reported to the police while talking to people about Falun Gong in the Wenjiachang area, Wenjiang District, on January 14, 2021. They were arrested and their homes were ransacked.

Ms. Zhan Zhongxiang and Ms. Zhou Yuxiang from Pingdu City were taken from the Pudong Detention Center to the Jinan Prison on January 14, 2020.

Ms. Qin Yun from Hushu School, Gongshu District, was arrested by officers from the Xiangfu Police Station at noon on January 14, 2021.

Ms. Liu Qiuhua is nearly 70 years old and lives alternately in the homes of her two sons.

Officers from the Jianqiao Police Station, Shengcheng Sub-district, went to her son’s home in Xinzhuang Village on December 7, 2020. She was not at home. They ransacked the place and confiscated four Falun Dafa books and an audio player.

After she returned home, village Party secretary Yao Panjun came to her home to harass her at night, which resulted in her daughter-in-law’s loss of temper, who dragged Ms. Liu out of the door. Ms. Liu has not been able to go back and has been displaced.

Ms. Sun Haiping was deceived by security guards of Songwangzhuang Village Committee on December 8, 2020. Three guards intercepted her and said that she distributed Falun Gong materials on December 4. Four or five officers from the Shichang Police Station arrested her.

During this period, the police took pictures and fingerprints and drew blood samples from her. She failed the physical examination and the Daling Detention Center refused to accept her.

The officers took her to the Maternal and Child Health Hospital to produce a fake ECG. They took this fake ECG to the detention center for the second time. Ms. Sun was detained for 10 days. She had incontinence at night on December 19, and was released the following day.

They forced Ms. Ai to give out her home address and took her home to have it ransacked by the place. She was taken to the Songyuan City Detention Center the following day.

Mr. Peng Yuxin from Shushan District was arrested and his home ransacked on April 24, 2020. It was learned over eight months later that he was held in the Hefei City Detention Center.

Ms. Xu Zhiqun and Ms. Zeng Defang were reported to the police for distributing Falun Gong materials on the morning of December 28, 2020. They were arrested by a dozen or so officers from the Sanjie Township Police Station.

They were cuffed to iron chairs at the police station for 12 hours. They were taken to the Pengzhou City Detention Center for six days of detention. They returned home on January 3, 2021.

Practitioner Cheng Quanyun (gender unknown) from the Ciqu area, Tongzhou District, was officially placed under arrest on November 4, 2020. Previously her home was ransacked on April 23, 2020, and she was released on bail for one year.

Ms. Yang Haixia, Ms. Li Shuchun, Ms. Li’s non-practitioner nephew, and Ms. Liu Shuping from Dumeng County were arrested on January 11, 2021. They are being held in the Dumeng County Detention Center. The police planned to turn their case files over to the procuratorate.

Officers from the Dongtiejiangying Police Station and staff members of the Tongren Sub-district Administration Office went to Ms. Liu Yanqin’s home on the morning of January 12, 2021. Ms. Liu was not at home. They called her relatives to harass them. They pressured her to sign statements to renounce Falun Gong.

Ms. Ding Jianhua’s non-practitioner husband received a phone call from the Lugu Road Police Station one afternoon in mid-November 2020. The police told him to tell Ms. Ding to go to the police station and the police would collect some information about her. They said, “This is requested by the higher authority. If she did not come, we would go to your home and arrest her.” Ms. Ding did not go. They called again at 8 p.m. that evening.

Later, the police took pictures of her and collected her blood samples, fingerprints, and eye information.

Mr. Yang Rongsen from the Cementing Company of Sinopec Southwest Petroleum Bureau was harassed again by officer Lou Yuqiang from the Domestic Security Sub-team of Chengdu Public Security Division on January 11, 2021. Officer Lou asked Mr. Yang to go to the Ziyang High-speed Railway North Station Police Station at 10 a.m. on January 12 to close the case of his being released on bail.

Mr. Yang was arrested in Chengdu North Railway Station on March 25, 2020, after he was found to carry 222 currency bills (worth over 1,000 yuan in total) with Falun Gong facts written on them. He was later released on bail.

Lu Li, who is responsible for monitoring Internet content at the Lianhua Community, called Ms. Shao Ying’s sister on June 11, 2020, and asked Ms. Shao to go to the community office. Ms. Shao went to the office in the afternoon. Lu pressured her to sign the three statements, but she refused.

At around 3 p.m. on July 30, secretary Ding Shufeng of the Mishan City Political and Legal Affairs Committee and five others came to Ms. Shao’s home. She did not let them into her home, and did not agree to video recording.

Secretary Ding said that if she signed statements, her name would be deleted from the list compiled by the government, and she could travel freely in the future, and her child’s work would not be adversely impacted. She refused.

At first Ms. Shao refused to let them into her home. Director Lu Xiangang demanded her to open the door on the grounds that as a leader he had to visit the subsistence allowance families. Ms. Shao has been receiving subsistence allowance. The group of people videotaped Ms. Shao’s home. Lu’s attitude was extremely rude and arrogant. Lu claimed that if she cooperated by signing the paperwork, her minimum living allowance would be increased; if her attitude was not good, the minimum living allowance would be terminated. Lu also threatened that there were other ways to force her to “transform.”

Lu and five others came to Ms. Shao’s home again at around 4:30 p.m. on December 2. They pressured her to sign paperwork, but she refused. Wang Jianguo and Li Wenhao, who came with Lu, took cell phones to record the whole process.

At around 8:30 p.m. on December 23, police officers went to Ms. Shao’s home and knocked on the door. She was not at home.

Ms. Qian Fuyun, 58, from Jintun Village, Tuoshan Township, was arrested by the Tuoshan Police Station on the morning of January 13, 2021, for talking to people about Falun Gong. Subsequently, the officers ransacked her home and confiscated all her Falun Dafa books and New Year paintings on the wall. They also recorded all the phone numbers in her phone book.

Elderly Ms. Huang Shulan was followed by two women in the Nancheng Community when she went shopping on the morning of January 12, 2021, one of whom said she was the new Party secretary.

They followed Ms. Huang to her home, looked around, and took pictures with cell phones. After a while, another man came in and rummaged through things.

At the same time, elderly Ms. Wang Manqun was harassed by the Yufu Community staff members and Domestic Security officer Ma Yuliang. They first took down a couplet with Falun Gong content, and Ms. Wang tried to stopped them. Ma said: “People at the provincial level are coming. After they leave, I will put it back up for you.” She disagreed and asked him to post it on the wall immediately.

Staff members from the Xicheng Community went to Ms. Fu Qingming’s home on the same day, but she was not at home.

Huang Cheng, director of the Luozhou Sub-district Administration Office in Lianjiang City, brought a group of special police and armed police to knock and kick on the door of Ms. Wen Dongqing’s home on December 15 and 16, 2020. They attempted to arrest her. Her child was waken up from sleep, and was panicking.

They ransacked her home and confiscated photos of the founder of Falun Gong and printed materials. They repeatedly came to harass and intimidate her family. Her family has been very stressed.