(Minghui.org) Eight residents of Kunming City, Yunnan Province were sentenced to 3 to 5 years in prison by two courts in late 2020 for their faith in Falun Gong, an ancient spiritual and meditation discipline that has been persecuted by the Chinese communist regime since 1999.

Seven of the practitioners, including a mother and daughter, were arrested between April and September 2019. The eighth practitioner was seized in May 2020. Most of them were targeted for distributing informational materials about Falun Gong. 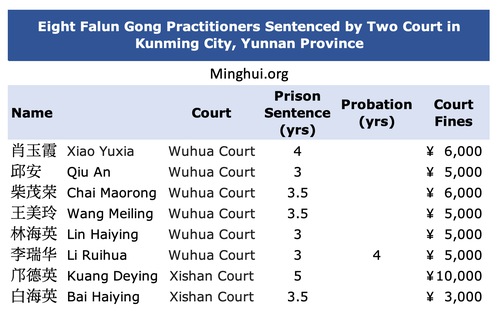 Below are the details of each practitioner’s case.

Ms. Xiao Yuxia was arrested at home by seven officers on September 6, 2019. The police also confiscated her Falun Gong books. Her arrest was approved on September 30, 2019.

During Ms. Xiao’s trial by the Wuhua District Court on November 18, 2020, her lawyer demanded that the presiding judge, Qin Xiaoying, exhibit documents verifying the authenticity of the prosecution evidence. The judge refused to do so and said the documents were confidential. When the judge signaled to rush through the show trial, the lawyer protested by withdrawing from Ms. Xiao’s case. The judge adjourned the trial.

While Ms. Xiao’s family was still waiting in the lobby of the courthouse, the judge secretly resumed the court hearing and finished the session half an hour later.

Not knowing about it, Ms. Xiao’s family contacted the judge in the next few days and asked about the new court date. The judge either didn’t pick up the phone or directed her secretary to tell the family that they hadn’t scheduled the session yet. Only when Ms. Xiao’s family visited her in the detention center later on, did they find out that the judge had already finished the court proceeding about her case.

It remains to be uncovered as to when the judge sentenced Ms. Xiao to four years with a 6,000-yuan fine.

Mr. Qiu An, an electronics store owner, was arrested in his store on May 11, 2020, after being reported for talking to his customers about Falun Gong.

During his hearing on November 18, 2020, the police and prosecutor asked for a heavy term against him. They accused him of promoting Falun Gong in his store and distributing booklets. The prosecution evidence used against him included a Falun Gong book, nine booklets and other Falun Gong keepsakes confiscated during his arrest.

What happened in 2018 was that Mr. Qiu was rejected admission by the detention center because he suffered broken bones in his pelvis and ribs after being beaten by police. Even though the police claimed that they issued the administrative surveillance decision while Mr. Qiu was receiving treatment in the hospital, Mr. Qiu was never notified of the alleged punishment. As such, the so-called non-existent “administrative surveillance” should never have been used as an excuse to seek heavier sentences against him, argued his lawyer in his latest court hearing.

Mr. Qiu’s lawyer added that the police violated legal procedure in interrogating his client and ransacking his place. The two witnesses who reported him also failed to appear in court to accept cross-examination. All of these only demonstrated that his client was innocent.

Mr. Qiu denied any wrongdoing and said it’s his freedom of religion to practice Falun Gong.

The judge He Xuefen still sentenced him to three years with a 5,000-yuan fine.

Mr. Chai Maorong was arrested at a grocery market on April 12, 2019. The prosecutor of Wuhua Procuratorate accused him of using banknotes with printed information about Falun Gong and possessing Falun Gong informational materials at home.

Mr. Chai was tried by Wuhua Court on November 19, 2020. He denied any wrongdoing and said that his using the banknotes was to raise awareness about the persecution, given the strict information censorship in China. His lawyer pointed out that the prosecutor failed to demonstrate how his client undermined law enforcement as indicated in the indictment.

Judge Li Zhongyuan later sentenced him to 3.5 years in prison with a 6,000-yuan fine.

Ms. Wang Meiling, a resident of Chuxiong City, was arrested on June 8, 2019, by police from Kunming, who accused her of distributing Falun Gong informational materials and talking to people about Falun Gong near an internet cafe in Kunming ten days prior. The police ransacked her residence in Chuxiong and confiscated all of her Falun Gong materials. When Ms. Wang tried to clarify the facts about Falun Gong and urge the officers to stop taking part in the persecution, the police accused her of promoting Falun Gong.

During pre-trial meetings on January 13 and August 6, 2020, Ms. Wang’s lawyer twice urged the prosecutor to dismiss her case, but to no avail.

Ms. Wang’s daughter submitted several requests to represent her during her hearing on November 19 but was repeatedly rejected by judge Qin Xiaoying.

Ms. Wang’s lawyer also pointed out his client was detained for 13 months before the hearing on November 19, which exceeded three-month legally permissible terms. He applied to have Ms. Wang released on bail three times, but to no avail.

Ms. Lin Haiying, 54, and her mother, Ms. Li Ruihua, 78, were arrested on May 13, 2019. The police accused them of distributing Falun Gong informational materials on the street. A large quantity of the materials were confiscated from them during the home-raid.

The prosecutor charged them with “undermining law enforcement,” a standard pretext used by the Chinese courts to frame Falun Gong practitioners.

Both the mother and daughter denied wrongdoing during their hearing on November 20, 2020. The lawyers also entered a not-guilty plea for them and argued that no evidence demonstrated which law had been undermined by them or how.

Ms. Kuang Deying was arrested at her apartment on September 24, 2019. Her Falun Gong books and related materials were confiscated.

During her hearing on November 20, 2020, her lawyer entered a not guilty plea for her and argued against the lack of legal basis for the persecution. But the judge Zhang Linmin still sentenced her to five years with a 10,000-yuan fine, only because of the Falun Gong books and materials found at her home.

Ms. Bai Haiying was arrested at work on September 24, 2019. The police searched her bag and found 8 Falun Gong booklets. While ransacking her home, they confiscated her 109 Falun Gong books and 167 booklets.

Her arrest was approved on November 1 and the police submitted her case to the Xishan District Procuratorate on December 27, 2019.

The police later revealed that two women went to a local bread shop on September 4 and left a copy of the Nine Commentaries on the Communist Party there. The shop’s owner reported the women to the police and they suspected that one of them was Ms. Bai.

When prosecutor Du Qiongxian met with Ms. Bai in the detention center, she mixed a statement pleading guilty with other files and ordered Ms. Bai to sign them first before reading the content.

During her first online hearing on August 14, 2020, Ms. Bai revealed how the prosecutor had deceived her into signing the statement. She said she couldn’t acknowledge the statement and pleaded not guilty.

Prosecutor Du threatened her that she would get a heavier sentence if she pleaded not guilty. But Ms. Bai insisted that she was innocent.

The Xishan Court held two more hearings for her, on September 30 and November 21. Her lawyer and a family member entered not guilty pleas for her. They argued that Ms. Bai didn’t violate any law in practicing her faith and there is no legal basis for the persecution.