This motion was introduced by MP Michael Chong, the vice chair of the Standing Committee on Foreign Affairs and International Development, on February 18. It was passed in the House of Commons with an overwhelming vote of all 266 MPs. 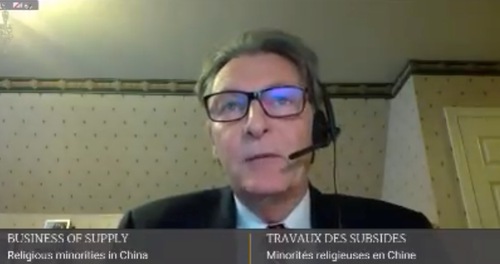 Screenshot of MP John McKay during the House of Commons debate on February 18, 2021

Treating the CCP as One Would Treat Terrorists or Mafia Thugs

During the debate on February 18, MP John McKay said that this motion brought an opportunity for the government to reflect on the “deep anger of the people of Canada toward the Chinese Communist Party.”

He said that the arrogance and ignorance expressed by CCP officials and their diplomats has inflamed the passions of Canadians. He pointed out that “The most obvious point of contention is the hostage kidnapping of the Michaels by the Government of China. The Government of Canada is necessarily constrained when it deals with the reality of kidnapping.”

Canadians Michael Kovrig and Michael Spavor were arrested in China after Meng Wanzhou, the CFO and deputy board chair of the Chinese telecommunications company Huawei, was arrested on December 1, 2018 at Vancouver International Airport by Canada Border Services Agency officers.

“Kidnapping works. It is the hallmark of terrorists, organized crime, rogue nations, and the Communist Party of China.” MP McKay said, “It is contrary to the rules and values of any civilized nation, let alone the rule of law. Necessarily, the Government of Canada has had to deal with the Government of China as one would with terrorists or Mafia thugs; therefore, this has had relational consequences, as does this debate.”

He added that “No trade deal, convention, memorandum of understanding, or contract is worth the paper it is written on with this government. Any vulnerability will be exploited by the Government of China, and there is no basis for any trust, for any undertakings, or for any understandings.”

MP McKay also said that the CCP “has decided that it has no respect for any other nation, large or small.” Its goal is “to have all nations as vassal states, including Canada, New Zealand, Australia, and Great Britain.”

He recalled that when Nixon visited China back in the 1970s, “it was the intention of the family of nations to bring China out of its backward state by a series of favorable trade deals, the most significant of which was admission to the World Trade Organization.”

But the reality is that “for years, China has regarded the laws, conventions, and rules of the WTO as casual suggestions to be ditched when convenient. It appears that cheating pays.”

“Widespread theft, one-sided trade admissibility, off-tariff blockage, and outright corruption have fueled China’s spectacular rise in wealth, and the west has been slow to respond. Simultaneously, unanswered military aggression in the South China Sea, with the creation of artificial islands and the intimidation of other nations’ navies, particularly those of the Philippines and Vietnam, has further entrenched China’s bully status.” he added.

MP McKay pointed out that in addition to ignoring international rules, the CCP also uses its vast financial resources to buy or intimidate other developing nations. At the same time, it is engaging in widespread theft of intellectual property in developed countries on a daily basis.

Additionally, the use of slave labor in China has also devastated numerous industries in Canada. It has been reported by the Globe and Mail, the Toronto Star, and the CBC that “vast slave networks are producing all kinds of goods, many of which infect Canada's supply chain.”

The Globe and Mail also recently carried a story about how the solar giant Canadian Solar and two mining companies were left in “grave danger of having their supply chains tainted with slave labour.”

“Canadian workers and companies cannot compete with slave labour. The practice is so widespread that consideration should be given to a change in the presumptive balance, the assumption being that goods coming out of China have slave elements in them unless it is demonstrably shown to be otherwise.” said MP McKay.

MP McKay said that the modern slavery act Bill C-423 he introduced in the last Parliament has been picked up in the Senate and is now Bill S-216. He suggested that the Government of Canada take it over and make sure that “Canadians would not knowingly buy products made by slaves.” and “Companies of a certain size would be required to certify to the Minister of Public Safety that they have examined their supply chains and are satisfied that no slavery exists in them.”

MP McKay emphasized that “Wealth built on theft, intimidation, duplicity, and slavery is the hallmark of this Chinese government. It should therefore be no surprise that human rights, let alone moral integrity, are foreign concepts to this deeply corrupt government.”

He said that the CCP regards its human rights abuses in Hong Kong and ever-increasing aggressive military provocations in Taiwan as its “internal matters,” but “they are manifestly not internal matters.”

On top of that, “There are other international concerns: border skirmishes with India, the occupation of Tibet, the abuse of its own citizens, the substantiated allegations of organ harvesting of Falun Gong practitioners, and the wanton destruction of Christian churches.” he said.

With regard to the extensive evidence of “torture, enslavement, restrictions of freedom of movement, denial of freedom of religion and belief, and denial of the right to a fair trail” towards the Uyghurs, he said, “all the evidence points one way and all the state disinformation points the other way.”

He suggested the government of Canada adopt a variety of policies, including Magnitsky sanctions of Chinese officials, trade sanctions, diplomatic pressure, and reform of multilateral institutions in order to put pressure on the CCP’s egregious human rights abuses.

“Vancouver, Canada: Quitting the CCP at a Local Market”