(Minghui.org) The Canadian parliament passed a motion on February 22, 2021 designating the persecution of Uyghurs by the Chinese Communist Party (CCP) as genocide. The motion urged Prime Minister Justin Trudeau to take action against the atrocity.

This motion was brought on February 18 by Michael Chong from the opposition Conservative Party. Although Trudeau and his Cabinet abstained from the vote, this motion was widely supported by the Bloc Quebecois, New Democratic Party, Green Party, and Liberal backbenchers with an approval of 266-0 in the House of Commons. 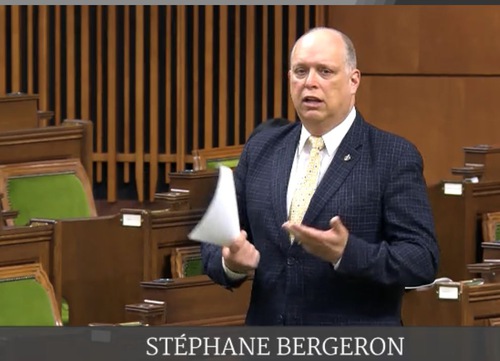 Stéphane Bergeron, spokesperson for the Bloc Québécois in foreign affairs, explains the motion on February 18, 2021.

During a debate on February 18, Stéphane Bergeron, spokesperson for the Bloc Québécois in foreign affairs, said that the CCP had escalated human rights violations against a number of groups since early 2000.

“At the end of World War II, the world learned in amazement what had happened in the Nazi concentration camps. Following these dramatic events, one of the first – if not the first – conventions adopted by the newly founded United Nations was that on the prevention and repression of genocide, which Canada ratified in 1952 and which therefore imposes obligations,” he remarked. “This convention defines what constitutes genocide and it suffices that only one situation be observed for there to be a question of genocide.”

“However, we are talking here about concentration camps, rape, separation of children from their families, forced labor, surveillance and mass sterilizations, all of the situations mentioned in the convention,” he added.

Available on the United Nations website, the Genocide Convention was adopted in December 1948 and has 150 member states as of January 2019.

More specifically, the term Genocide is defined in Article II of the Genocide Convention:Genocide means any of the following acts committed with intent to destroy, in whole or in part, a national, ethnical, racial or religious group, as such:(a) Killing members of the group;(b) Causing serious bodily or mental harm to members of the group;(c) Deliberately inflicting on the group conditions of life calculatedto bring about its physical destruction in whole or in part;(d) Imposing measures intended to prevent births within the group;(e) Forcibly transferring children of the group to another group.

Bergeron said some people call the CCP’s concentration camps “labor camps,” a term he felt has downplayed the brutality. This is similar to the phrase of “work sets you free” at the entrance of Auschwitz and other concentration camps. In reality, horrible incidents had occurred, including rape, separation of children from their families, slave labor, surveillance, and much more.

Bergeron said that the Canadian Minister of Foreign Affairs once remarked that the facts mentioned above are “not sufficiently documented” and that communist China should allow an independent international mission to go there and document this. “The argument does not hold water, since both the European Union and the United States, not to mention a number of international organizations, do not hesitate to speak of genocide,” he added.

The European Parliament published a report in 2016 titled “Organ Harvesting in China.” Citing resolution from the European Parliament in December 2013, it said the “common targets of this practice [forced organ harvesting] are the Falun Gong practitioners as well as religious and ethnic minority groups.”

Bergeron added that the U.S. Congress is also aware of this issue. Both current and former U.S. administrations referred to it as genocide. Furthermore, the CCP has been silencing Western media on this issue. After the BBC reported the genocide in China, CCP officials restricted the news outlet’s expansion in China.

Elizabeth May, former leader of the Green Party, read a statement in the debate. She urged the Canadian parliament to take the mistreatment in China seriously. She said that Falun Gong practitioners had brought up the issue of forced organ harvesting and torture, as well as lists of key perpetrators. She said the Magnitsky Act should be applied to hold them accountable.

Bergeron also hopes the cabinet will pay attention to this. “Colleagues from all parties, including the Liberals, have recognized, in a parliamentary committee, that a genocide was indeed perpetrated by China against its Uighur population,” he explained. For example, Alexis Brunelle-Duceppe and other Canadian parliament members signed an open letter titled “The Games of Shame,” which asked the International Olympic Committee to move the Winter Games to 2022.

“If the People’s Republic of China continues its delirium... genocidal. What is the minister waiting for to finally tell the truth about what he knows about what is happening in China and finally echo the position adopted by his colleagues?” he added.

“What have we learned from the experience of World War II? Despite the convention adopted by the United Nations, we witnessed the Rwandan genocide with closed eyes. Despite this convention, we witnessed the genocide in Bosnia-Herzegovina with closed eyes,” Bergeron explained, “Are we going to witness yet another genocide with our eyes closed, reacting after the fact and telling ourselves how unfortunate it was? We can see it, it’s time to act!”

“Jiangsu Veteran Passes Away After 11 Years of Being Bedridden”