(Minghui.org) Mr. Wang Deqing became a police officer at the end of 1994. Around the same time, he also took up Falun Gong, an ancient spiritual discipline also known as Falun Dafa, and credits the practice for helping him stay calm while cracking difficult cases.

When the Chinese Communist Party realized that about a hundred million people like Mr. Wang had taken up Falun Gong by 1999, it launched a nationwide campaign against the practice in July 1999, seeking to eradicate Falun Gong from China in three months.

As Mr. Wang refused to give in to the regime’s demand to renounce Falun Gong, he has suffered two decades of persecution since and also lost his job as a police officer.

Mr. Wang was taken to a forced labor camp in February 2002. Due to a beating, his right ear was pierced, and he also developed lumbar disc herniation. The police department fired him in November 2003.

Mr. Wang was arrested again on July 4, 2013. He suffered declining health due to torture in custody and fainted in court during the trial. After he was released on medical parole, he went into hiding to avoid further persecution.

On May 11, 2015, Mr. Wang was located in Qinghai Province and secretly arrested. He was sentenced to four years in prison and taken to Kangjiashan Prison in Shenyang City in November.

Below is some of the torture he suffered at Kangjiashan Prison.

Sitting on a Small Stool for a Long Time

Mr. Wang was held in the second ward of the prison. The director was Yan Tiede and the instructor was Qi Gang.

On the day of his arrival, inmate Li Qiang brought Mr. Wang to an area without surveillance cameras to torture him.

Mr. Wang was forced to sit on a small stool facing the wall every day. He was not allowed to go to the bathroom. Any movement would result in beating and verbal abuse. Because he refused to renounce Falun Gong, he was forced to sit longer than other inmates and was deprived of sleep. Another inmate, Zhang Tiejun, also participated in torturing him.

Tied Up in Excruciating Position

In the winter, the inmates stripped Mr. Wang of his winter jacket, tied up his arms behind his back and then tied him to the back of a metal chair while forcing him to sit on the tile floor. Two inmates then split his legs as wide as they could, leaving him in excruciating pain.

Sometimes the inmates stuffed his mouth with rags to keep him from screaming due to the pain or played music while they were torturing him.

Inmate Li Qiang was a repeat offender. He was good at understanding the guards’ intention and learned many torture methods to use on the practitioners. In one torture, he rolled up a letter-sized book into a tube and hit Mr. Wang’s neck arteries on both sides. 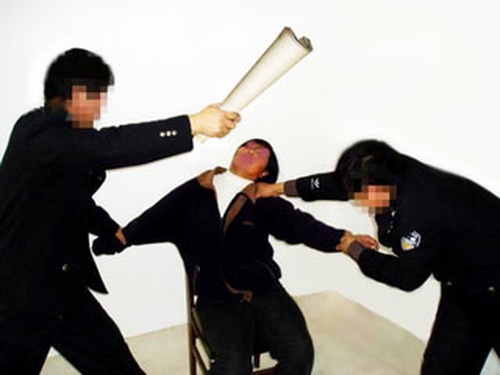 Once after Li and Zhang beat Mr. Wang, the ward instructor Qi Gang, who was over 6 feet tall, came in. Qi hit Mr. Wang on his nose and caused his nose to bleed. He then slapped him in the face. After a while, he kicked Mr. Wang and knocked him down to the ground. Mr. Wang’s head almost hit a faucet.

To keep other inmates from seeing Mr. Wang’s injuries, Qi kept Mr. Wang in the torture room and didn’t allow him to go to the cafeteria for lunch. In the evening, he was taken to Qi’s office by Li and Zhang, who then handcuffed him to a chair. Qi came in with another guard, both of whom had electric batons in their hands. They shocked Mr. Wang at the same time. There was another pile of electric batons on the table even though each ward was legally allowed to have only one electric baton.

In addition to the torture, every practitioner was also forced to do heavy labor without pay. Although the inmates were allowed to take a break between each assignment, the guards forced Mr. Wang to work continuously without any breaks. When a senior practitioner learned about this, he protested by not sleeping for two nights in a row.

Each practitioner was monitored tightly by two or more inmates 24 hours a day. They were not allowed to talk to anyone. Even when they met with their families, the whole process was monitored by a guard standing on the side.

In the second half of 2017, Mr. Wang’s health deteriorated due to the torture, and he was resuscitated in the emergency room.

The prison had a self-claimed election of prison leadership in 2017. The outcome was predetermined, and no practitioner was allowed to vote.

Between 2015 and 2018, at least twenty practitioners were detained in the second ward of Kangjiashan Prison. One practitioner, Mr. Xu Guangzhu from Dalian, almost died after he was beaten in his head with bamboo strips. Another practitioner, a teacher who was sentenced to nine years, lost four teeth from the beating.

At that time, the prison ranked first in three areas: no cell phones for prisoners; no accidents for 20 years, and highest rate of “transforming” Falun Gong practitioners (forcing them to renounce their faith). It was revealed that in order to achieve the high transformation rate, the guards kept a group of practitioners in a room and assigned four inmates to watch each of them, depriving them of sleep for a week. Mr. Zhao Chenglin, of Benxi City, was a former military officer who was sentenced to four years. He died in February 2020, shortly after he was released.

In 2016, the ward instructor Qi was promoted to be the head of the fourth ward for his active participation in the persecution. Before his promotion, the fourth ward, which was designated for elderly and disabled inmates, rarely had reported cases of Falun Gong practitioners being tortured. He escalated the torture upon arrival and was soon promoted to principal of a juvenile correction school.

“Always Remembering My Mission, Even in Prison”