(Minghui.org) Today's news from China includes incidents of persecution that took place in 10 cities or counties in 4 provinces, where at least 33 practitioners were recently persecuted for their belief. 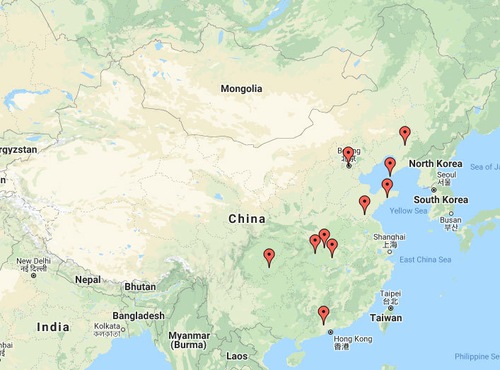 Ms. Liang Yaomin was arrested on January 9, 2021, and was held in the Fushan Detention Center for nearly a year. It was reported that she would be tried via video link on December 16.

Ms. Zhang Xiuli, Ms. Zhang Yongmei, Mai, Kanglin (gender unknown), and Mr. Tong Xuesheng, who were held in custody, were tried by the Haizhu Court on November on November 2, 2021.

The Party Committee staff members went to the home of Mr. Jiang Wentian and his wife Ms. Wang Quanhua in Shangshizikuang Village on September 15 and pressured the couple to sign paperwork.

Ms. Li Shubi, 80, from Tongliang District was arrested in July 2021. She is being held in the Hechuan Detention Center and does not have any money to pay for necessities. Her family is afraid of being implicated, and does not dare to tell others about Ms. Li’s situation.

In addition, the pension payments that Ms. Han Zonglan bought for herself via social insurance were suspended by the Tongliang District Social Insurance Auditing Section.

Suizhou City Political and Legal Affairs Committee officials and assistant officers in Tieshu Residential Community went to Mr. Ge Xinshan’s home on October 21, 2021. They pressured Mr. Ge to sign paperwork. They threatened that if he did not sign, he would not be able to use public transportation. They also threatened to cancel his pension.

Ms. Yang Laixiao from Yanqing District was arrested by officers from the Baiquan Police Station on December 1, 2021. She was taken to the police station for questioning with transcripts. Officers then took her to the county hospital for a physical examination, including X-rays. That afternoon, she was taken to the Changping Detention Center for another examination. The detention center refused to accept her.

At 8 p.m. that evening, Ms. Yang was taken from the detention center to the Yanqing City Police Department. The officers called her family to pick her up. She was placed under residential surveillance for six months.

Mr. Zhang Shude from Shuangcheng District, Harbin City, was abused in the No. 5 Ward in Dongling Prison. Since September 2021, Hou Xiaolin and Zhao Xun handcuffed Mr. Zhang’s wrists and ankles to the bed every night. Mr. Zhang could not get out of bed. The abuse is still on-going.

Officers from the Desheng Street Police Station broke into Ms. Wu Chun’s home and ransacked the place on the morning of March 26, 2020. They arrested Ms. Wu with a warrant, and took her to the police station. They released her around 6 p.m.

On April 30, 2021, Ms. Wu was tried by the Ganjingzi Court. The court announced a first instance verdict on June 3, and Ms. Wu was sentenced to one year in prison.

Li Feng, head of the Liancheng Town 610 Office in Mengyin County, took Shi Yunxiu (gender unknown) from Xinanyu Village and Mr. Song Derong from Chengzi Village to the brainwashing center in August 2021. The two practitioners were given a blood test, and then forced to watch videos that slandered Falun Gong. Both practitioners returned home a few days later.

Mr. Zhang Jiekang, in his 40s, works as an electrician. He has not been seen since May 2021, and his family has relocated. His whereabouts remain unknown even though people are looking for him. It is likely that he has been taken into custody.

“Some Understanding from Reading Master’s New Article “Wake Up””