Home > Cultivation > Young Practitioners' Experiences
A Kind Teacher Who Guides Her Students with Truthfulness, Compassion, and Forbearance
Dec. 23, 2021 | By a Minghui correspondent in Taiwan

(Minghui.org) Ms. Yu Qing teaches primary school in Taiwan and uses the principles of Falun Dafa—Truthfulness, Compassion, and Forbearance—to educate her students. Her students have become truthful, kind, and forgiving. She wanted to share some of their stories. 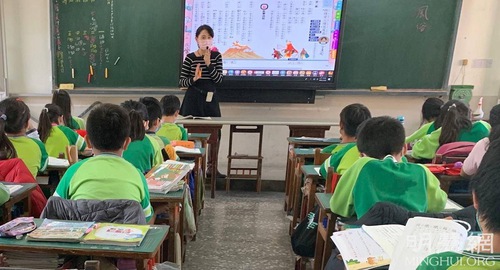 Ms. Yu Qing uses the principles of Truthfulness, Compassion, and Forbearance to guide her students.

Xiao Yu was a bad-tempered child who gave his teachers headaches. After he began to learn Falun Dafa from Ms. Yu Qing, he based his behavior on Truthfulness, Compassion, and Forbearance and turned into a good student who works hard in his studies.

The arts teacher said, “When Xiao Yu was first switched to this class, there was ferocity in his eyes. He was not cooperative, often isolated himself, and did not pay attention. But now he’s calm, pays attention in class, and even has friends.”

He now quietly reads Falun Dafa books in the library during reading class every week. Seeing how steady and calm Xiao Yu has become, several classmates now read the books with him. Before he began practicing Falun Dafa, Xiao Yu either wasted time or climbed the bookshelves. He now treasures every reading class.

Xiao Yu occasionally forgets to control himself and starts to make rude jokes. His friends remind him, “That is not what a practitioner would say.” He listens and keeps himself in check.

Xiao Yu knows that it’s important to do the exercises and asks Ms. Yu Qing to go over the movements with him whenever she has time. He got a few classmates together to do them. Everyone said they felt warm and comfortable after doing the first exercise.

Ms. Yu thought only Xiao Yu wanted to learn the exercises, but some of the other students asked if they could learn them, too. Xiao Yu asked his teacher, “Why don’t you teach the whole class?” Now, many children do the exercises with Ms. Yu. 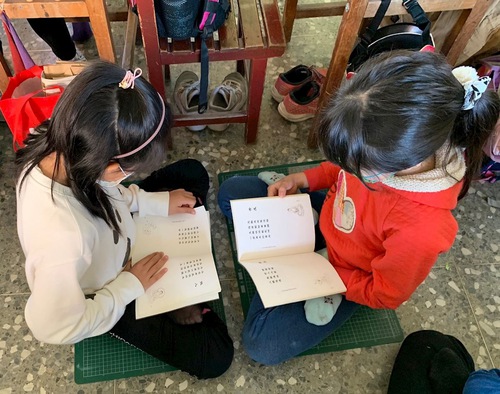 Difficult Girl Changes after Meditating with Other Children

Xiao Li is in the class next door, and she regularly had conflicts with other children. After the students in Ms. Yu’s class talked about how wonderful they felt when they meditated, Xiao Li decided to join them after getting permission from her teacher.

One day, her teacher Mr. Zhou told Ms. Yu, “Xiao Li has changed a lot. In the past she would argue if you pointed out her faults. Now when I see any inappropriate behavior, I just say, ‘Is this following Truthfulness, Compassion, and Forbearance?’ and she quietly changes her ways.”

She replied, “I listen to them read the book Zhuan Falun and young practitioners’ cultivation stories.”

Mr. Zhou asked, “Did you learn anything?”

She told him, “We learn to be good people by following Truthfulness, Compassion, and Forbearance!”

Mr. Zhou asked, “What is Truthfulness, Compassion, and Forbearance?”

Xiao Li explained, “Truthfulness means to tell the truth and do truthful things, Compassion means to help others and consider them first, and Forbearance means not retaliating when one is cursed at or beaten.”

Mr. Zhou was astonished by her words and said, “I did not expect Xiao Li, who has difficulty communicating, to say such things. Yet I observed that not only is she well behaved, but she is also polite and her relationships with other children in the class have improved. The students who disliked her before have changed their attitude towards her. Xiao Li has changed so much after practicing meditation that it amazes me.”

Many classmates surround Xiao Li and listen to her recite the poems in Hong Yin. These children used to avoid Xiao Li. Now they smile and say, “I hope to be in your class.” Xiao Li said this is the first time she felt welcomed by her classmates. Her eyes sparkled and she said her heart was filled with joy.

The children get routine health exams at the start of each school term. Zhen Zhen was found to have blood in her urine. The school nurse told her teacher Ms. Yu, “Of all the students in the fourth grade, only Zhen Zhen’s results were abnormal. Please ask her parents to take her to the hospital for further tests.”

Zhen Zhen’s mother was very worried and took her to the hospital. After three tests, the results were the same, and the doctor said that there was a problem with her kidneys. She was so young—how could something be wrong with her kidneys?

Ms. Yu told Zhen Zhen, “Maybe you can try sincerely saying, ‘Falun Dafa is good, Truthfulness-Compassion-Forbearance is good.’” Zhen Zhen agreed. Soon after, Zhen Zhen returned to the hospital to be re-tested. When she saw her teacher again, she was all smiles: “The doctor said I’m fine now! I am so happy. Those nine words are indeed magical!

She also said, “Six months ago, my father had to have surgery to remove a brain tumor, and I was afraid he would die. You told me to recite those phrases, so I went home and told my mother and said maybe we could say them together. My mother agreed. The operation was successful and my father soon recovered. Not only that, after doing the exercises, the pain in my stomach that had bothered me for a long time went away!”

When she was in third grade, Zhen Zhen once took some stationery from her classmate and refused to admit it. It caused quite a stir in the school. After she began to study the Fa in fourth grade, Zhen Zhen changed. She now often helps others and kindly reminds them when they behave inappropriately, “That is not something a practitioner would do.”

Zhen Zhen now meditates with her legs in the full lotus position and reads Dafa books. Whenever there is time left after cleaning up the classroom, she asks, “Teacher, can we do the exercises?”

Xiao Rui’s teacher scolded him every day because his grades were getting worse and worse. His mother was very strict, but he lost interest in learning. His confidence was severely impacted—he was afraid of his teachers and under a lot of pressure. He began scratching his legs to relieve stress and his legs got so bad he nearly had to go to the hospital to have them seen to.

Because he felt he would not succeed no matter how hard he tried, Xiao Rui either didn’t do his homework or did it carelessly. He gave up on himself. One time, Ms. Yu called him over and said, “I only recently learned that Xiao Yun used to beat up on you, yet you never reported it. Another student told me. I think you are a kind person. Your character is even better than mine.”

“You know, all of us come from heaven. We came to earth to learn Truthfulness, Compassion, and Forbearance. Our family in heaven is eagerly waiting for us to go home.” As Xiao Rui listened, his eyes filled with tears.

From then on, he took the initiative to read Hong Yin and memorized several poems. He even started to hand in homework. He asked Ms. Yu, “Can I join the meditation session if I finish my work?” When Ms. Yu agreed, he would quickly finish his lunch and his homework so that he could join the others in meditating during the afternoon break. Xiao Rui can meditate for over 30 minutes.

Gradually, his grades improved. In the recent mid-semester exams, his average grade in all his subjects was over 90. He began to gain confidence and was a different child in many ways. His parents and teachers observed his transformation and were happy for him.

“Can I Read Zhuan Falun Today?”

Every day during the afternoon break, Ms. Yu Qing asks a child to read to the class from the book Zhuan Falun. Every time, a child asks her, “Teacher, can I read the book today?” Because the students enthusiastically ask for the opportunity to read the book, Ms. Yu decided to let everyone take turns. 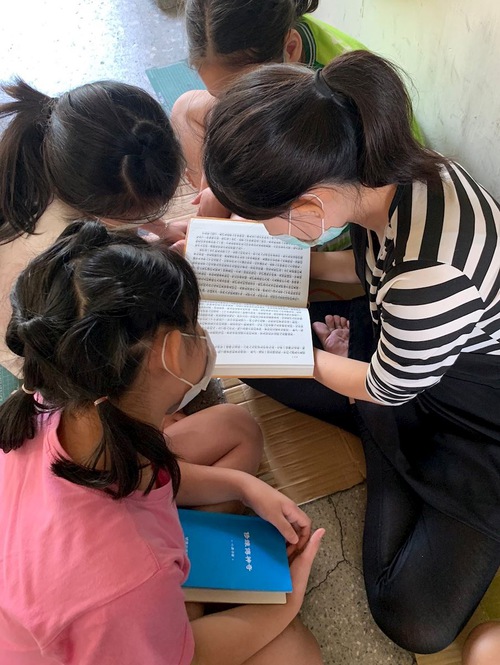 Ms. Yu Qing reads Zhuan Falun and other books on traditional culture while the students listen.

The Special Seat Everyone Envies

There is a row of Dafa books on the classroom bookshelf. When Ah Long, who sat next to the shelf, was disciplined by the teacher for behaving badly, he said, “I don’t want to sit here, I want to change seats.”

Ms. Yu asked the students, “Who wants to swap with Ah Long?” Several raised their hands and said, “I want to sit next to Dafa books!”

Ah Long was surprised to see everyone fighting for his seat. He told them, “I don’t want to change seats. You might put the books in the wrong place and mess them up.”

In Ms. Yu’s class, everyone is envious of Ah Long’s “special seat” next to the Dafa books.

We Like the Teacher Who Has Truthfulness, Compassion, and Forbearance in Her Heart

Xiao Yu wrote, “Ms. Yu is kind. She lends me the book Zhuan Falun to read and has shown us how to meditate. She is the best teacher I have ever had.”

Xiao Feng wrote, “My teacher has Truthfulness-Compassion-Forbearance in her heart. She introduced us to Dafa.”

Xiao An wrote, “We should follow Truthfulness, Compassion, and Forbearance—they are fundamental to this universe.”

Xiao Jun wrote, “Thank you, Ms. Yu, for teaching me the principles of Truthfulness, Compassion, and Forbearance.”

Xiao Yu wrote, “Zhuan Falun is not just a book, it teaches one how to be a good person.”

Xiao Wen, “I can help classmates with emotional problems. I can teach them Truthfulness, Compassion, and Forbearance so that they can learn to control their emotions.”

Xiao Quan wrote, “This morning, I was running around the classroom with other students and thought no one knew about it. Now I realize I shouldn’t do that because I might hurt someone.”

Xiao Yu wrote, “As a Dafa disciple, I shouldn’t be attached to playing with laser pens. Sorry, Teacher, I won’t be naughty again.”

Xiao Yu wrote, “I won’t run in the corridor again because I want to be a person who follows Truthfulness-Compassion-Forbearance.”

Xiao Qiao said, “When I grow up, if my friends are in trouble, I will send them the book Zhuan Falun and help them recall Truthfulness, Compassion, and Forbearance. It will help them overcome their problems.”

Things like this take place in Ms. Yu’s class every day. The seeds of Truthfulness, Compassion, and Forbearance are maturing and growing stronger. These children’s paths to adulthood might be fraught with difficulties and tests, but they all know “Falun Dafa is good, Truthfulness-Compassion-Forbearance is good.”

“Counting My Blessings after 20 Years of Cultivation”