(Minghui.org) “People should watch this precious film. We should tell more people to pay attention to and stop the persecution,” Lorraine said after watching the documentary “Letter from Masanjia.” She invited the event organizers to screen the documentary in her community.

The documentary was screened in the Allan Scott Auditorium of the University of South Australia on December 12, 2021 to mark Human Rights Day. The torture and cruelty in the Chinese forced labor camp exposed in the documentary shocked the audience. 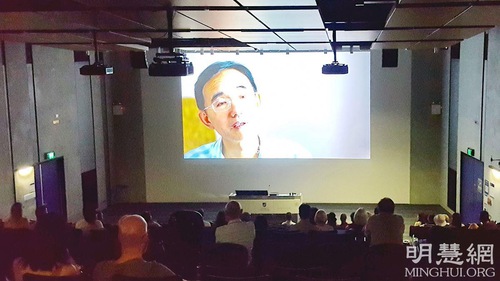 “Letter from Masanjia” was screened in the Allan Scott Auditorium of the University of South Australia on December 12, 2021 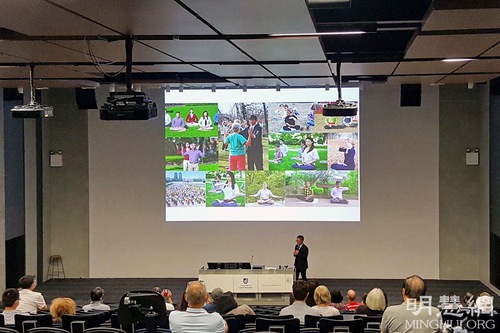 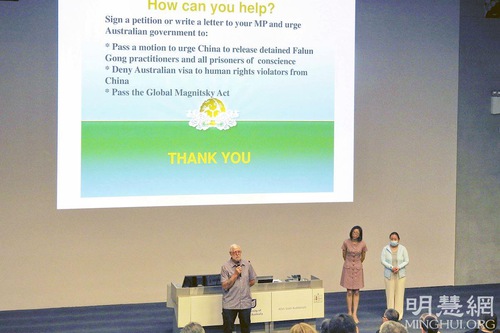 A question and answer session was held after the documentary screening.

The documentary candidly recorded Falun Dafa practitioner Sun Yi’s imprisonment in the notorious Masanjia labor camp, where he was forced to make cheap Halloween decorations. He hid approximately 20 letters detailing the atrocities committed at Masanjia in the finished packages. Julie Keith, a mother in Oregon, found one of the letters. Her discovery set off a chain of events that led to the shutdown of the entire labor camp system in China. The persecution of Falun Dafa didn’t stop, however, and Sun Yi had to escape from China.

After the film, local practitioners further introduced Falun Dafa and the persecution by the Chinese Communist Party (CCP), and showed some of the products sold in stores that are produced by forced labor in China. Through an interpreter a Falun Dafa practitioner told her story—how she was illegally sentenced for her belief in a forced labor camp and in prison.

Professor: The International Community Must Speak Out

University professor Frank Grutzner said that the reality shown in the film was shocking. He said, “The persecution has not stopped. On the surface, although the reeducation through labor system had been abolished, the CCP is still using other methods to detain and persecute people. The international community still has a lot to do. We must continue to speak out and act.” 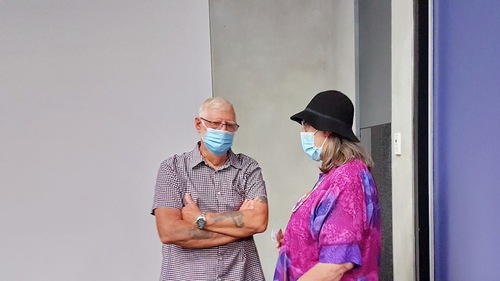 After watching the film, Lorraine, a retired nurse, found the organizer and asked to show the film in the community where she lives. She said she knew that Falun Dafa practitioners are persecuted. Her daughter and son-in-law worked and lived in China many years ago and witnessed the beginning of the persecution.

Lorraine has been telling people about the persecution carried out by the CCP over the years, including live organ harvesting. At first, some of her relatives and friends did not believe her.

She said that she couldn't help crying. “People should watch this precious film. We should tell more people to pay attention to and stop the persecution.”

Audience member Simon said that the film truly recorded the ongoing persecution, which shocked him. He said, “I saw a persistent force in the author (Sun Yi) of the letter. He was very strong in his heart. He had to bear the persecution that others could not bear for his faith, and even made those who participated in the persecution of him cry in admiration and tears. It’s very touching.” 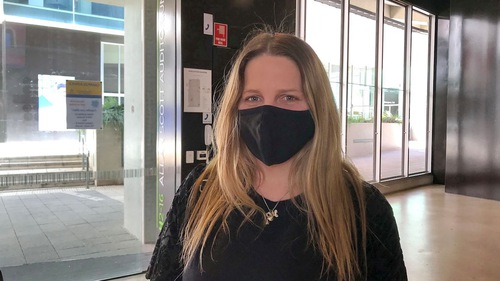 University student Emma Angus said the film is very touching and that Sun Yi is admirable. “Good people should be praised but (in China) they are persecuted and tortured,” she said. The final subtitles about Sun Yi’s death broke her heart. “I was expecting a happy ending, but what happened to him moved me to tears.”

Margo from Poland said that her grandfather was tortured and murdered in a concentration camp in Poland run by the Nazis. She said, “At that time, we complained loudly and called for help but few people believed us or offered help. Now the evil labor camp is used by the Chinese Communist Party to persecute the Chinese, we must not be silent!”

Margo invited her friend Mr. Hu to watch the film. He is studying discrimination and persecution of religious beliefs in the world.

Falun Dafa (also known as Falun Gong) was first introduced to the public by Mr. Li Hongzhi in Changchun, China in 1992. The spiritual discipline is now practiced in over 100 countries and regions worldwide. Millions of people who have embraced the teachings--which are based on the principles of Truthfulness, Compassion, and Forbearance--and learned the five exercises have experienced uplifted health and well-being.

“Brussels, Belgium: People Call For an End to the CCP’s Organ Harvesting”