(Minghui.org) “I heard music and saw people meditating,” said Anja Prizreni as she was passing by the Munich Odeonsplatz. Falun Gong practitioners gathered on December 13 to mark Human Rights Day. “The music touched my heart and immediately attracted me. I was fascinated and loved it.”

The practitioners demonstrated the exercises and told people about Falun Gong’s principles of Truthfulness-Compassion-Forbearance. They also exposed the Chinese Communist Party’s (CCP) persecution of their faith and how practitioners in China have their organs forcefully harvested by the CCP regime. They called on the German people to pay attention to the issue and uphold universal values. People also signed a petition condemning the persecution. 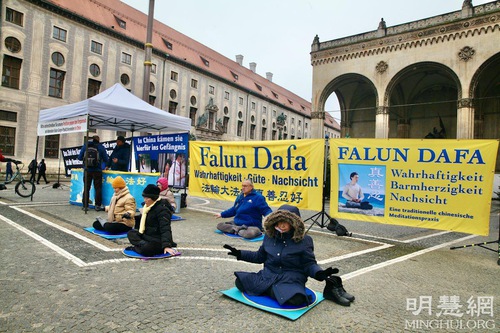 Falun Gong practitioners demonstrate the exercises at Odeonsplatz in Munich on December 13. 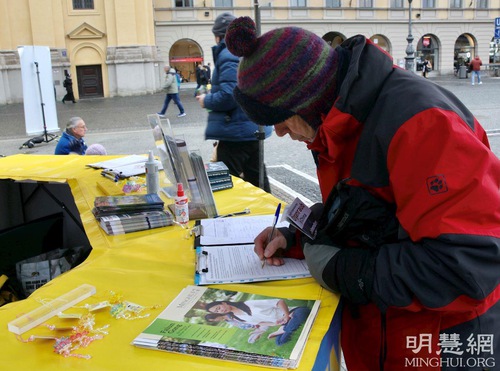 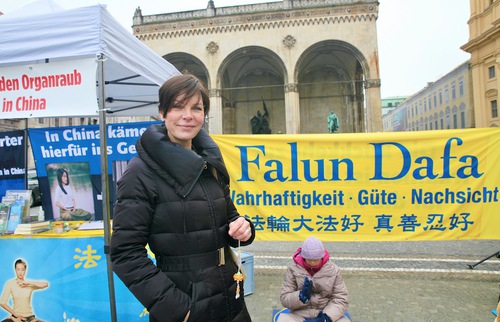 Anja Prizreni stopped by to learn about Falun Gong.

Anja Prizreni is an office manager at a patent law firm. She took some time to watch Falun Gong practitioners demonstrate the exercises, read the informational displays and signed a petition against the persecution. “I am very willing to sign it to support you. The CCP still sells organs from its own people. It is absolutely forbidden to do so. This is very bad,” Prizreni exclaimed.

Prizreni was appalled to learn how Falun Gong practitioners in China are killed for their organs and that the persecution has lasted 22 years, “This is against humanity, against God, against the law of heaven, against everything! Everyone should sign the petition.”

Pritzreni really liked the little origami lotus flower with the words “Truthfulness-Compassion-Forbearance” that she got from a practitioner, “If everyone can live according to this standard, how good the world would be.”

Clinic Owner: I Am Shocked at the Organ Harvesting 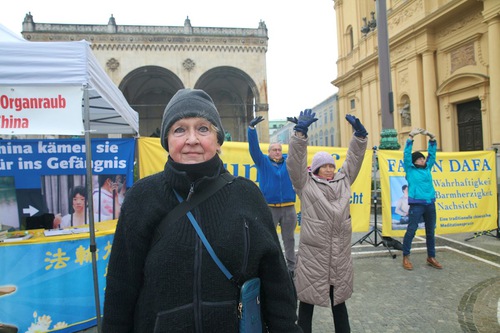 Hanna Kotowski, a psychotherapist clinic owner, got off her bicycle and chatted with a practitioner when she saw their setup at Odeonsplatz. It turned out that she was on her way to work and had some time to spare, “I think what (Falun Gong practitioners) are doing is incredibly meaningful. It’s true all over the world.”

A month ago, she saw a large-scale Falun Gong rally and parade in Maria Square in Munich. Her impression was that Falun Gong was peaceful. At that time, she signed a petition which calls for an end to the CCP’s persecution. She also pointed to the little lotus flower on her bike, saying that she got it that time and that she liked it very much.

Kotowski said that she also met Falun Gong practitioners in the German city of Regensburg a year ago and learned about the persecution. Her reason for signing the petition was simple, “Because the CCP is terrifying. It does the worst thing anyone can imagine. I was deeply shocked by the organ trafficking.”

“Indonesia: Calling For an End to the Persecution of Falun Gong on Human Rights Day”

“Cultivating as Though I Just Began Practicing: Looking Within is Key to Making Breakthroughs”