(Minghui.org) To help more people learn about the spiritual practice of Falun Gong, practitioners did the exercises together on Crissy Field just east of the Golden Gate Bridge in San Francisco on December 5, 2021. 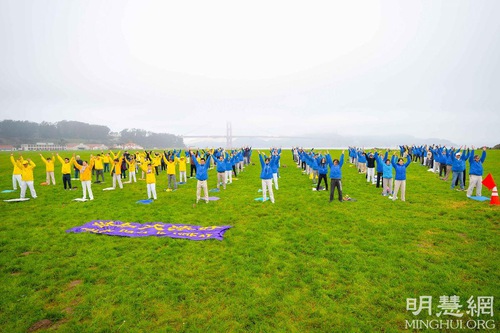 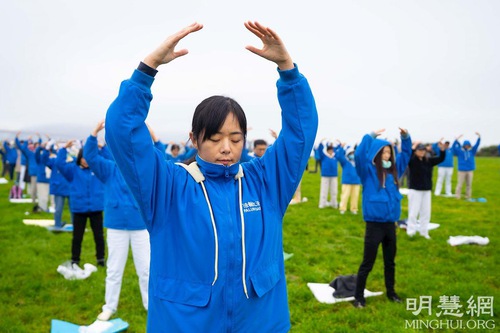 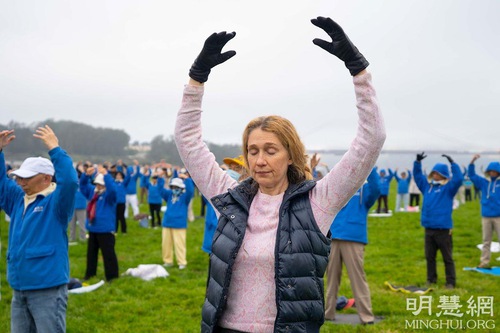 Many people in the park stopped to watch. Mike, a jogger, gave practitioners a thumbs-up as he passed. He said that he supports Falun Gong and their freedom of belief and freedom of speech.

“Everyone should have the right to freedom of belief,” Mike said. “I support Falun Gong practitioners. I know about the CCP’s (Chinese Communist Party) crime of organ harvesting. I have signed the petition to bring down the CCP.”

Mike said he would tell his two friends who were out jogging with him about Falun Gong.

Ms. Fatima happened to look out the window of her home and see the peaceful scene of Falun Gong practitioners doing the exercises in the park. She decided to go to the park to find out what was going on.

She said that she had done yoga and had always wanted to find a school that she could practice. Seeing practitioners doing the exercises in the park had piqued her curiosity and she wanted to learn more, so she tried the fifth exercise, the meditation.

“I did it for 10 minutes just now. This exercise is great—I really liked it. I hope you can come here to practice again every Sunday,” she said.

Another woman accepted a flyer and said that she had heard of Falun Gong and would visit the FalunDafa.org website.

Falun Dafa (also known as Falun Gong) was first introduced to the public by Mr. Li Hongzhi in Changchun, China, in 1992. The spiritual discipline is now practiced in more than 100 countries and regions worldwide. Millions of people who have embraced the teachings—which are based on the principles of Truthfulness, Compassion, and Forbearance—and learned the five exercises have experienced improved health and wellbeing.

Minghui.org has confirmed the deaths of thousands of practitioners as a result of the persecution over the past 22 years. The actual number is believed to be much higher. Many more have been imprisoned and tortured for their faith.