Home > Persecution > Accounts of Persecution
For Upholding His Faith, Man Beaten Repeatedly and Threatened by the Authorities
Dec. 10, 2021 | By a Minghui correspondent in Sichuan Province, China

(Minghui.org) When Mr. Deng Chuanjiu walked out of prison on October 15, 2021 after serving four years for practicing Falun Gong, he was met with agents from the local 610 Office, an extralegal agency specifically created at the onset of the perscution (1999) to suppress Falun Gong.

Mr. Deng, a Pengzhou City, Sichuan Province resident, was taken to the city government building. For an entire day, officials there ordered him to sign statements to renounce Falun Gong before they would allow him to go home.

Mr. Deng countered that no law has ever criminalized Falun Gong in China and that it’s illegal for the 610 Office to persecute Falun Gong practitioners.

As he was talking, Liao Xiaohui, the deputy mayor of Gexianshan Town, began to beat him. “I know I can’t win over you with reason, but I’m good at beating people. Are you signing or not?”

Liao beat him even harder and also poured cold water on him. He beat Mr. Deng again after the police took him to the Gexianshan Police Station. Mr. Deng still refused to give in.

The police created a new case document for Mr. Deng and demanded a copy of his verdict. After Mr. Deng gave it to them, they attempted to keep the original copy. Only after Mr. Deng vowed to sue them, did the police return the verdict to him and release him.

On the evening of November 22, a month after Mr. Deng returned home, Liao and three of his assistants arrested him again. Liao lied to his family, saying that he was taking Mr. Deng to the police station, when in fact he took him to the township government, where he beat Mr. Deng again and ordered him to sign the statement to renounce Falun Gong.

Liao beat Mr. Deng so hard that one stick broke into three pieces and a metal pipe was bent. Then he found another metal pipe and police baton to continue beating him.

When taking Mr. Deng home, the police ransacked his place. Liao also threatened him and his family, “This is only the beginning. We can arrest you at any time and beat you up. Maybe today, maybe tomorrow. Don’t even think of having a peaceful life or a sound sleep again.” 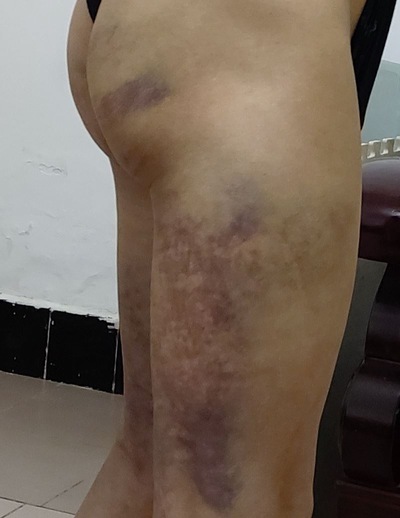 Severe bruising on Mr. Deng after being beaten

“An Early Vow and a Near-death Experience”