Home > Cultivation > Improving Oneself
How a Woman Changed from Acting Like an Overlord to Being Gentle and Kind
Dec. 1, 2021 | By Minghui correspondent Fang Chen

(Minghui.org) When anyone meets Liu Jui-dung, they think that she speaks softly, considers the needs of others first, and is gentle and kind. But she was not like this before. She used to be the overlord in her family. Her husband was her punching bag, and she was the stern tiger mother of her children. Neighbors often said, “She is beautiful, but has a bad temper.”

She was known for having a strong personality but suffered from depression. She seemed to be desperate. However, because of a newspaper and a book, she was reborn. She no longer loses her temper, and she recovered from her illnesses. The most important thing for her is that she has now become a happy person.

Here is how Liu Jui-dung’s life changed after reading a book. 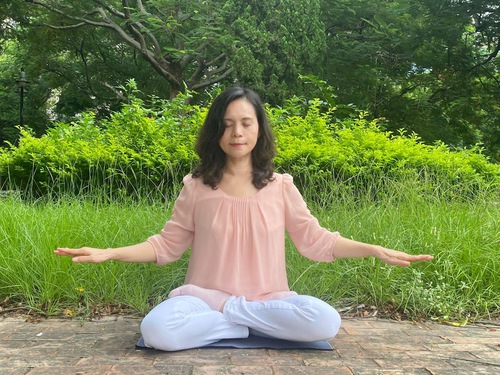 Arrogant and Bad Temper: No One Dared to Provoke Her

Liu Jui-dung is the only daughter in her family and has been favored since childhood. After getting married, both her husband and father-in-law spoiled her. Her father-in-law never let her wash even a bowl or a pair of chopsticks. He also set up a chain of children’s clothing stores for her to operate.

Most importantly, her first child was a son, which made her even more favored by her father-in-law. Therefore, she turned more arrogant and temperamental. When business did not go well, she threw things away. She took out her anger on her husband. She even tore up their wedding photos when they quarreled.

In the middle of a cold and rainy night one winter, she had her husband drive nearly three hours to buy her a meat dumpling. If not, she wouldn't let him sleep. She was completely unreasonable.

She forced her three children to study diligently, even demanding that they memorize English words to use the restroom. She would spank them even if they scored one point less than a specific mark. To teach her daughter to be on time in elementary school, she arranged to pick her daughter up after school and would wait only 10 minutes after the school bell rang.

Once when her daughter’s teacher kept the students after school to talk to them, her daughter started to cry and told the teacher about her mother’s hot temper. The whole class was frightened, and she became known for being fierce in her daughter’s class.

She was not kind to her neighbors either, sometimes hurting their feelings. A neighbor once parked his car in front of her house. She shouted out the license plate number down the street. Her husband was embarrassed, but she didn’t care. Her neighbors said, “She is beautiful but has a bad temper.”

A Book Changes Her Life

Even though she was a strong woman, she was unhappy, especially during the five or six years after she got married. Her mother got cancer and passed away. It was a big blow to her and she cried every day. Five mournful years passed, and she became weak and became fragile. She felt that life was rocky and began to look for answers in Buddhism. She studied Buddhism for 10 years, but she was still at a loss, so she started to practice qigong. Her health deteriorated anyway.

A regular customer at her store was in poorer health than she was. In the past, they told each other which doctor to go to. But, a year later, the customer burst into her store full of energy. Upon asking what had brought this about, she learned that the customer was practicing Falun Gong.

This customer gave Ms. Liu a copy of The Epoch Times newspaper. She didn’t look at it until she was given a third copy and was drawn by the stories in it. She read a practitioner’s experience sharing article about how her health improved. One sentence “Find a way home” touched her and made her eager to learn Falun Gong. She looked forward to seeing this customer again.

Eventually, the customer showed up again and told her to first read Zhuan Falun, the main book of Falun Gong (also called Falun Dafa). As soon as the customer left, Ms. Liu sat down to read Zhuan Falun throughout the night. When she opened the book, she couldn’t help but weep when she saw the photo of Master Li, the founder of Falun Dafa.

Ms. Liu knew that this practice was what she wanted and quickly went to a group practice site in a nearby park to learn the exercises. She participated in the nine-day free teaching session on March 29, 2002. When she watched the video of Master’s lectures, she felt that the Falun (law wheel) was spinning in her body. What was more amazing was that, before she practiced Falun Gong, she suffered from severe bone spurs in her cervical and thoracic spine, which compressed her nerves. The right half of her body was numb, and she'd always had trouble sleeping. She had acupuncture for three months, but it didn't help. Three months after she started practicing Falun Gong, however, her hands and feet were no longer numb, and after half a year, her bone spurs disappeared. She recovered from all her ailments and became light-hearted.

She had shingles on her neck one day, which circled half her neck by the third day. She just studied the Fa and did the exercises. On the fourth day, the rash started to shrink and was healed within a week. Her husband was amazed and said, “Dafa is truly amazing! Even shingles can be cured in a week!”

Ms. Liu’s husband noted that his wife had completely changed. In the past, when she got stressed out and irritable, everyone else would suffer. Now, she speaks softly and considers others’ needs before her own.

After her father-in-law left one day, Ms. Liu started to wash the dishes. She had a little trouble and became a little impatient. Her husband gave her a few pointers and said, “Why are you so stupid?” In the past, she would have found fault with him and lost her temper. But this time she said, “I’m sorry, I will improve. I hope it doesn’t trouble you.”

She said that she could be that way because, after she cultivated Falun Gong, she understood from the Fa that a practitioner had to look inward. But she didn't change immediately. When she was on the verge of losing her temper, she would recall what Master said: “Nothing is truly unbearable or impossible.” (Lecture Nine, Zhuan Falun).

She just repeated this sentence again and again until her irritability and remorse were gone, and her mind was calm. Gradually she got rid of her attachments and hot temper.

People around her know that Dafa is good, and different interpersonal relationships have gradually improved. Her husband is helping to clarify the truth.

Her daughter once said to her, “Mother, you used to put a lot of pressure on me. I am happy since you changed. We can be friends.” Her daughter wants to communicate with her no matter what happens.

Ms. Liu said that people asked her, “Did you do something? Your aura is different, and you look kind. What are you practicing? Even your speech is different.”

The most obvious change is her temper. If she has anything good, she will share it with her neighbors. Her neighbors comment that Falun Gong is good and encourage her to keep practicing it.

Such a good practice is being persecuted in China by the Chinese Communist Party (CCP). Practitioners are imprisoned or even have their organs harvested while they are still alive. To raise awareness among the people who've been misled by the CCP, Ms. Liu clarifies the truth.

A man knew that the CCP was evil and listened to Ms. Liu clarify the truth. He agreed to quit the CCP and its youth organizations.

Ms. Liu said that many people in China fail to see the difference between the CCP and China. They mistakenly think that the Party will get better someday. They don’t know that the CCP damages traditional culture.

She said that she used to be arrogant and was very opinionated. She did whatever it took to achieve her goals. After practicing Falun Gong, she changed her outlook. She used to speak fast and was rude and unreasonable. Now she will think twice and follow the Dafa principles of “Truthfulness-Compassion-Forbearance.” When facing disappointments in her career and family, she can overcome them quickly because of the Fa. Her life is much better.

For over 10 years, she has personally experienced how good Falun Dafa is. She hopes that predestined people learn the truth about Dafa so that they can have better lives.