(Minghui.org) Today's news from China includes incidents of persecution that took place in 12 cities or counties in 7 provinces, where at least 30 practitioners were recently persecuted for their belief. 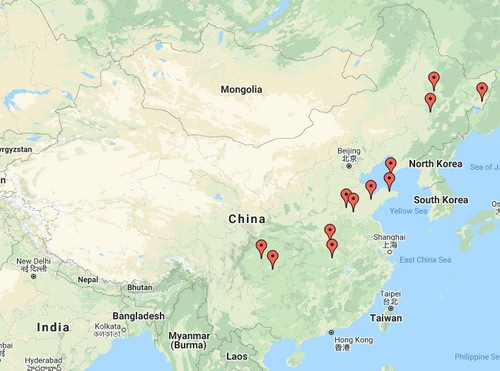 The Ganjingzi District Court recently issued a notice that Ms. Zhang Cui was sentenced to two years and six months in prison and fined 20,000 yuan.

Ms. Huang Lijuan was reported to the police by a taxi driver after she talked about Falun Gong in the taxi on October 22, 2021. She was arrested and taken to the Dongxihu Detention Center. Fifteen days later she was taken to the Qiaokou District Brainwashing Center.

Ms. Shi Shengbi went to visit Ms. Zhang Dinglan in Yuzhong District on October 12, 2021. As soon as Ms. Shi stepped into Ms. Zhang’s home, officer Huang Gang from the Lianglukou Police Station and others, who had been following her, forced their way in. These people ransacked Ms. Zhang’s home. They confiscated all her Falun Gong books. The practitioners were taken to the Dahuang Road Police Station and interrogated for three hours. Later, the officers took Ms. Shi to her home, ransacked the place, and confiscated her Falun Gong books.

The home of Yu Zhicheng (gender unknown) in Jiangbei District was also ransacked. The police were tracking down the source of Falun Gong materials.

Mr. Zhang Jun, a teacher at the Dalian No. 123 Middle School, was given a talk by officials from the Dalian City Political and Legal Affairs Committee on July 14, 2021. The Jinzhou Police Department and the Dengshahe Police Station arrested Mr. Zhang the following day. The Jinzhou District Procuratorate officially arrested him on July 26. The case against him was turned over to the Pulandian Procuratorate on September 14. The procuratorate returned it to the police department.

Mr. Yu Jianchun from the Zhifu District was released on bail on August 23, 2020. In October and November 2021, he was harassed, threatened, and lied to on two occasions by officers from the Fenghuangtai Police Station. This brought tremendous pressure to his elderly family members, who are in their 80s.

Ms. Jiang Fang was arrested at practitioner Sun’s store in Kuiwen District on the afternoon of November 4, 2021. Further information is pending.

Domestic security officer Wang Yalin from the Yingchun Forestry Bureau and others went to Mr. Wang Dongxu’s work unit on October 24, 2021, and asked him if he still practiced Falun Gong.

On November 5, 2021, Zhao Ying and Sun Xiaoyan from the community management office went to Mr. Wang’s work unit to “transform” him. They slandered Falun Gong, photographed him, and recorded his voice with their cell phones.

Ms. Xie Qunfang was arrested on November 3, 2021. Details about her situation are not clear.

Ms. Yang Guihua was harassed and her home was ransacked.

Ms. Wu Yunhua from the Qiaokou District was arrested at home. It is not known where she is being held.

Ms. Li Shuxia was repeatedly harassed over the phone by Yin Guangjian, section head at her work unit. Yin pressured Ms. Li to sign the “three statements” renouncing Falun Gong. Yin also called Ms. Li’s husband and pressured him to cooperate. Yin threatened that if he did not cooperate, they would deduct Ms. Li’s pension and take her to a “transformation” class.

Ms. Li’s husband was deceived into cooperating and signed the three statements. These people also told him to persuade Ms. Li to make a statement that she would no longer practice Falun Gong and videotape her saying it.

Ms. Wang Yanling from Zhucheng City and practitioner Yin (gender unknown) from Yanzhou District were reported to the police while distributing Falun Gong materials in Zhongxin Town on October 13, 2021. The two practitioners were arrested by officers from the Zhongxin Police Station and the Zoucheng City Domestic Security Division. Ms. Wang was detained for three days, and Yin was released on bail after being detained for 10 days.

A staff member called Ms. Yuan’s husband and asked him to tell Ms. Yuan to go to the brainwashing center in the municipal Science and Technology Center to “study” for three or four days in late October.

Ms. Bai Yuzhen, 79, and Ms. Jin Yuling, 59, were arrested and their homes ransacked by officers from the Xinyang City Domestic Security Division and the Gongqu Road Police Station on June 22, 2021.