(Minghui.org) Freelance journalist Bettina Gorzolla was truly touched when she saw Falun Gong practitioners at Marienplatz in Munich on October 29, 2021.

The practitioners were holding a rally to show people the beauty of the mind-body practice and expose the Chinese Communist Party’s brutal persecution of Falun Gong practitioners in China.

“Unbelievably positive and uplifting,” Ms. Gorzolla said, “they were smiling from deep within their hearts, it made me cry.” 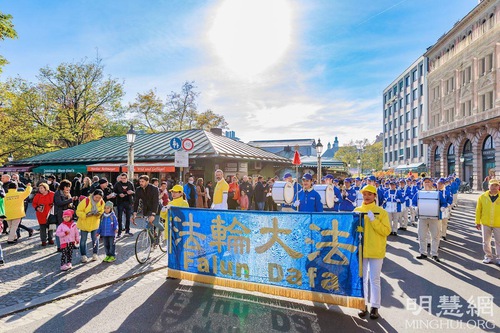 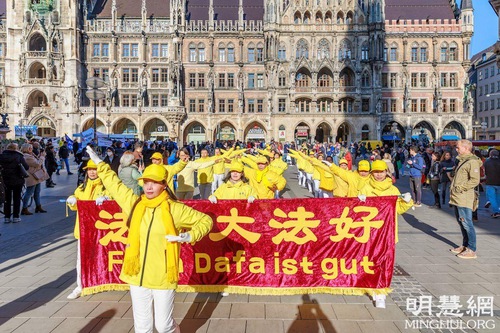 Falun Gong practitioners hold activities at Marienplatz in Munich, Germany, on October 29, 2021, to show people the beauty of the mind-body practice and expose the Chinese Communist Party’s brutal persecution of practitioners in China. People sign the petition to support practitioners' efforts to resist the persecution. 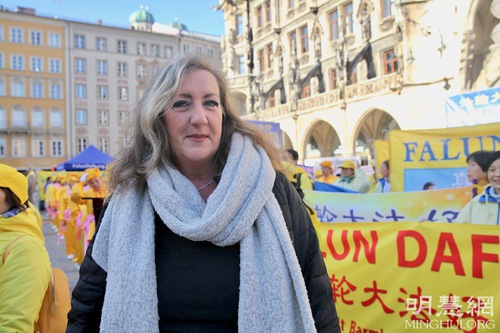 Ms. Gorzolla had been passing by Marienplatz on October 29 when she saw practitioners holding a rally. The scene had quite an impact on her, so she stopped to listen to the speeches. She told a practitioner that the CCP promotes communist ideology and cruel actions, and is extending these things into other countries. She felt it was very important for practitioners to stand up and oppose the CCP's crimes.

Ms. Gorzolla is a freelance reporter with her own channel on YouTube. After watching practitioners’ rally at Marienplatz, she followed practitioners along their parade route until the finishing point. She also accepted an interview with a Minghui correspondent and signed the petition to support practitioners' efforts to peacefully protest the human rights atrocities in China.

She said that the persecution is horrifying, “especially in China where people are not allowed to lead a life with a spiritual faith.”

“Truthfulness, Compassion, Forbearance teaches one to be kind with a belief, it helps to stop us from losing our kind, innate self,” Ms. Gorzolla said.

She felt that the practitioners' petition was important. “I must say, the more people that stand out, it will form a global freedom movement. Let us unite, come together and strengthen one another, we will then walk on the right path,” she said.

She understood that Falun Dafa is a spiritual, meditation practice. “Falun Gong practitioners stand up to tell people: Terrible things, including taking organs of detained prisoners by force, are happening; Appeal to stop stealing organs, disintegrate the CCP. I want to participate in this, therefore I signed the petition to stop organ harvesting by the CCP,” she said.

The CCP has been suppressing practitioners who follow the Falun Gong principles of Truthfulness-Compassion-Forbearance for 22 years.

Ms. Gorzolla held the view that bringing the topic of the CCP’s persecution of Falun Gong into public areas is an excellent idea. She pointed to practitioners who were taking part in the activities and said: “This is a wonderful scene, people cannot ignore this, they will obtain information, and I think the activities were brilliant!”