(Minghui.org) Today's news from China includes incidents of persecution that took place in 13 cities or counties in 7 provinces, where at least 25 practitioners were recently persecuted for their belief. 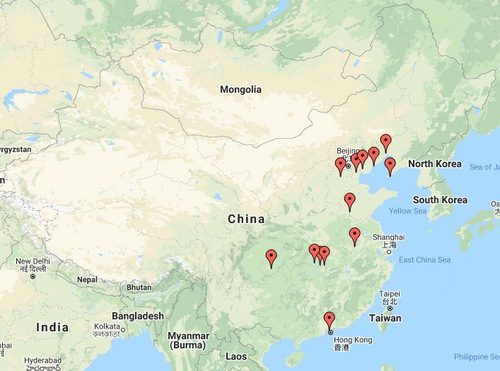 Because Mr. Luo Zhiyin was not informed about the court hearing at least three days ahead of time, which violated Paragraph 3, Article 187 of the Criminal Procedure Law, he refused to attend the hearing when his lawyer met him on October 27, 2021. At the lawyer’s request, the hearing was canceled.

Ms. Li Yuelan from the Baohe District was arrested and detained on July 3, 2021. She will be tried by the Shushan District Court on the morning of November 4, 2021.

Mr. Gao Hongshan was arrested at home on May 26, 2021 and has been detained in the Funing County Detention Center. His daughter was informed on October 25, 2021 that Mr. Gao would be tried in the Changli Court on November 2, 2021. His daughter went to the court on the afternoon of October 28, 2021 and submitted the application for the relative’s defender, but she was rejected. Two of Mr. Gao’s relatives were arrested in the court and were detained one day and one night at the Chengguan Police Station in Changli District.

Ms. Liu Guohua was arrested by officers from the Hexiwu Police Station in July 2020. She was denied admission by the detention center due to her physical condition and was released on bail pending trial. The Wuqing District Court held three court hearings against her and she was sentenced to three years in prison and fined 5000 yuan on December 8, 2020. She was allowed to pay the bail and leave for medical treatment.

Ms. Liu’s family received a notice from the Hexiwu Police Station that Ms. Liu would be detained soon since her physical condition improved. In fact, her platelet count is 478, which is far above the normal range of 100-300.

Twelve officers from the Tongliang District Police Department and the Shaoyun Town Police Station went to harass Wu Huiqun (gender unknown). They warned Wu not to distribute information about Falun Gong or contact other practitioners. They made a transcript and forced Wu to sign it.

These officers also went to the home of Bai Xingqiang (gender unknown), where they confiscated Falun Gong books, a photo of Falun Gong’s founder, a media player, Minghui Weekly publications, etc. Bai was taken to the Shaoyun Police Station and detained half a day. Bai went to the police station the next day to ask for the confiscated items. The officers refused to return the items and threatened to send Bai to a brainwashing center.

Ms. Li Wenfeng was arrested by police officer Duan Peng just after 8 a.m. on September 7, 2021. Her home was ransacked that day. The police confiscated more than 40 Falun Gong books, a photo of Falun Gong’s founder, a printer, her cell phone, 380 yuan imprinted with Falun Gong facts, 70 truth clarifying flyers, etc. Ms. Li was taken to the Hechuan Detention Center at around 1 a.m. on September 8, 2021.

Ms. Li’s husband was threatened with being imprisoned for the “crime of sheltering” her, and lose his pension. He cooperated with police to pressure Ms. Li to sign the three statements. Ms. Li was released on bail pending trial on September 27, 2021.

Li Yongzhi (gender unknown) lives in Anpingzhuang Village, Xingwangzhai Township, Zunhua City. Li was reported to police for posting the phrase, “Heaven will Eliminate the CCP” on a building, and was arrested. Li is currently being detained in Zunhua City.

Ms. Yan Xiling from Qingzhou City was recently arrested by Qingzhou City police and is currently detained in the Changyi Detention Center in Weifang City.

Led by Wang Shuodong, director of Xixiaozhuang Village, Ping’ancheng Town of Zunhua City, eight officers from the Ping’ancheng Police Station and the Tangshan City Police Department went to the home of Ms. Yang Cuijun’s daughter on October 12, 2021. They ransacked the place and confiscated her Falun Gong books and amulets. Ms. Yang’s daughter was taken to the police station. Ms. Yang was later arrested after she returned home from the field. They were released at around 8 p.m. that night.

Ms. Gu Baohuan was arrested at home at around 9 p.m. that same day by twelve police officers led by the village security director Wang Yanqing. Her home was ransacked and her Falun Gong books were confiscated. Ms. Gu was taken to the Zunhua City Detention House and placed in five-day detention. Ms. Gu was released on the sixth day, after her daughter was forced to pay 200 yuan.

Ms. Zhu Xiujuan, 72, was arrested by officers from the Jiefang Road Police Station on October 28, 2021, and her home was ransacked. She was released on bail pending trial around midnight that night.

Ms. Tang Fangqiong has been harassed since October 19, 2021 by Zhang Can and others from the Science and Technology Bureau. The persons involved in her harassment include Zhou Gaotang, deputy director of the Honghu City Political and Legal Affairs Committee, Jia Xiaohong, section head of the Political and Legal Affairs Committee, and Liang Hong, head of the Honghu City Domestic Security Division. Ms. Tang has been harassed via phone calls, home visits, having her power cut off, surveillance, etc.

Mr. Wang Changqing from Guangmingshan Town of Zhuanghe City is currently detained in Wafangdian City. His case has been filed with the Pulandian Procuratorate since last Summer.

Chen Gongyu (gender unknown) and Ms. Liu Ying were arrested by officers from the Chanling Police Station for distributing truth clarifying materials on October 31, 2021. More than 50 truth-clarifying materials were confiscated. They were taken to the police department and interrogated by four officers from the Jiazhuyuan Town Police Station. They were released at around 11 p.m. that day.

Liu Shenghua (gender unknown) was arrested by officers from the Zhuhe Town Police Station for talking to people about Falun Gong in Zhuhe Town on October 25, 2021. They were also accused of posting stickers with information about Falun Gong in the area. The two practitioners were released at night and were told by Kong Xiangxue, deputy of the Jianli City Domestic Security Division, that their case would be submitted to the procuratorate.

“Master Gives Me a Healthy Body”