Home > About Dafa > Health Benefits
Vietnamese Practitioner Thanks Master Li for His Compassion
Nov. 30, 2021 | By Minghui correspondents in Melbourne Australia

(Minghui.org) Doctor of Law Nguyen Duy Hung immigrated to Australia from Vietnam a few years ago. At the beginning of 2010 when he was at the peak of his career and life, a medical procedure nearly paralyzed him. A friend introduced him to Falun Dafa and through the practice he regained his health. In this season of gratitude, Nguyen Duy Hung would like to say to Master Li Hongzhi: “Thank you for guiding me and my family on the path of returning to our true selves. I am grateful for Master's compassion and salvation.” 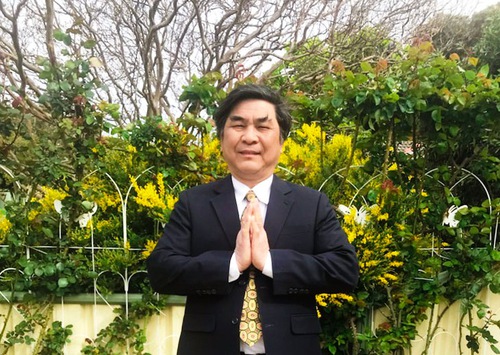 Nguyen Duy Hung is grateful to Master Li for his compassion and salvation.

Mr. Nguyen taught law in a famous university in Vietnam. He received a doctor of law degree in the then Soviet Union in the 1980’s, and by 2010 he was dean of the law school for nearly 20 years.

He enjoyed good health and was rarely sick. “I played tennis well. I was the fastest and most fit player on the team,” recalled Mr. Nguyen.

In early February 2010, he had more than 1,000 exams to check. He worked day and night to complete them in time. As a result of sitting for hours, his left leg became numb.

He told his family about the numbness and tingling sensation. His wife suggested that he see a doctor, so he visited a clinic on February 8 after work. His sister had laser therapy for her invertebrate disc pain at this clinic a few months before.

Mr. Nguyen had an MRI done there. The doctor told him that he should undergo a 30-minute laser therapy, otherwise he risked having both legs paralyzed. He later learned the situation was not as serious as the doctor said.

He was concerned, but the doctor assured him that the therapy was simple and only took 30 minutes. He would be able to return to the tennis court 30 days after the therapy. He agreed and returned to the clinic the following day.

The laser injured his spine. “Afterwards I had to lie in bed. I could only sit up for at most 30 minutes before I had to lie down again,” he said.

His tennis teammates were very surprised because he used to be so strong and fit.

Depressed and saddened, Mr. Nguyen hated the moral corruption of the medical system and society as a whole.

One day, a friend he met while studying abroad called him. When he heard about Mr. Nguyen’s situation, the friend said he would visit the following day and bring him a special gift.

The friend brought him the book Zhuan Falun and told him this was a priceless treasure.

Mr. Nguyen recalled, “After my friend left, I lay in bed and started reading from the first page, ‘On Dafa,’ word by word, line by line. The content of the book shocked me. I didn't want to put it down. I read until my eyes were so tired that I couldn't read anymore. In the early morning hours I fell asleep.”

When he woke up, he saw that the book was on his chest. So he continued reading. After he read the entire book, he called and thanked the friend. He said that the teachings were what he had been searching for all his life.

Mr. Nguyen still vividly recalls his reaction the first time he read Zhuan Falun, “I was an honest person and never lied. I always treat others kindly. When I read this book, I felt that it was written specifically for me!”

After Mr. Nguyen read Zhuan Falun for the second time, he realized it was a book about cultivation practice.

After he read the book carefully for the third time, he suddenly realized that he could stand up and walk without any therapy or treatment. He immediately phoned his friend and said, “I am ready to learn the exercises!”

“What’s most memorable is that the day my friend took me to the park to learn the exercises was July 20. That date is memorable for all Falun Dafa practitioners. On July 20, 1999, the Chinese Communist Party began persecuting fellow practitioners in China. Every time I think of the cruel persecution suffered by them, I can't help crying,” he said.

He had a character test the first day after he started practicing Falun Dafa. As soon as he entered his home, his wife said something so annoying that he lost his temper and quarreled with her.

It was just like Master said in the book, “Perhaps as soon as you step in the door, your spouse will throw a fit right in your face. If you endure it, your effort of practicing qigong today is not in vain.” (Lecture 4, Zhuan Falun)

“Afterwards I felt so ashamed,” he said, “I didn't pass the first test. Fortunately, Master immediately arranged another test for me. The second time after I practiced the exercises in the park and returned home, my wife was even angrier and asked for a divorce! Maybe it was because I didn’t pass the first test, the second one was so intense.”

“Although my wife was angrier this time, my heart was surprisingly calm. I thought, ‘Does she want me to give up cultivation?’”

“At the time I only said, ‘Do whatever you want.’ But I felt sorry for her. I knew that she was enduring karma since I started cultivation practice. Master said, “because whoever has acquired the karma feels uncomfortable. It is guaranteed to be this way.”” (Lecture 4, Zhuan Falun)

“I told myself that no one can force me to give up my practice. So no matter what my wife said, I didn’t take it to heart,” he recalled

Amazingly the next day, it was as though nothing happened—the happy and peaceful atmosphere was restored. They arranged for the entire family to visit the grandparents in their hometown. Everyone was very happy.

When his wife saw the positive changes in him she understood that Dafa is good, and since then she has been very supportive of his cultivation.

Mr. Nguyen said he grew up in a communist country steeped in atheism and propaganda. He received an education full of Communist Party culture, and even served as the Party secretary of his law school. He believes it was a miracle that he was able to begin practicing Falun Dafa.

He smiled and said, “Now I can read Zhuan Falun in Chinese with Chinese practitioners every day—I feel this is another miracle!”

“Thank you compassionate and great Master, who reached out and picked me up when I was at my lowest point. Only by practicing diligently and fulfilling the mission of Dafa disciples can I repay Master for his grace!” Mr. Nguyen concluded.