(Minghui.org) The city of Richmond, which is located in the Houston area, held its 6th annual Pecan Harvest Festival on November 21, 2021, with Falun Dafa practitioners participating for the first time.

Over 100 vendors participated in the event, and many people from all over came to enjoy the festivities. At their booth, practitioners who’d come from Houston showed a video about the practice, demonstrated the exercises, and showed anyone who was interested how to do them. After doing some of the exercise movements, several people commented on how comfortable they felt and that they sensed energy emanating from the exercise demonstrations.

The harvest festival was held from 11 a.m. to 6 p.m. outside Richmond’s City Hall, which is located on Morton Street, and spilled over onto side streets. 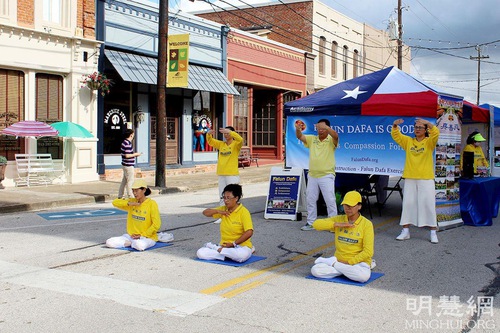 Banners that said, “Falun Dafa, Truthfulness-Compassion-Forbearance” and “Falun Dafa in Texas” decorated their booth. Other displays showed Falun Dafa practitioners worldwide doing the exercises. Fliers with information about the practice and handmade paper lotus flowers were available, and people could watch a video introducing Falun Dafa. Many people who stopped by the booth accepted truth-clarification fliers.

Practitioners in yellow T-shirts demonstrated the five Falun Dafa exercises. Passersby took photos and videos with their cellphones, and some said that they would like to learn the practice.

A young couple, Gilbert and Melissa, expressed their interest in the practice and learned the first four exercises. Afterward, Gilbert said, “I feel great. It is an amazing practice that opens up all the channels in my body. I believe I need to do this every day.” He said he would post his experience on his social media platforms.

“I feel very light after doing the first four exercises,” said Melissa. “I want to learn more about the practice by watching the exercise demonstration videos.” 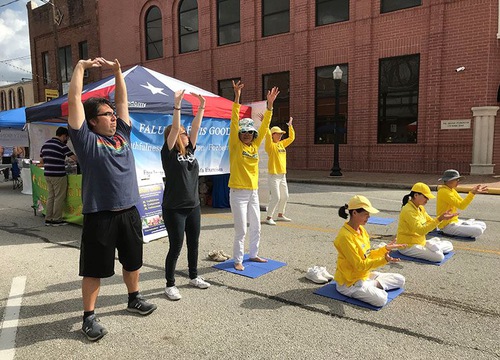 Gilbert (first on left) and Melissa (second on left) learning to do the exercises.

Brenda, who was drawn by the practitioners’ calm and peaceful energy field, said that this was what she had been looking for after a practitioner talked to her about the practice. Brenda has been searching for a way to solve her spiritual, mental, and physical problems. She expressed her interest in Falun Dafa and wanted to learn about it. Suzy, a practitioner, began to teach her the exercises. After doing just the first exercise, Brenda said, “I feel energy throughout my body. I feel very comfortable and light.” 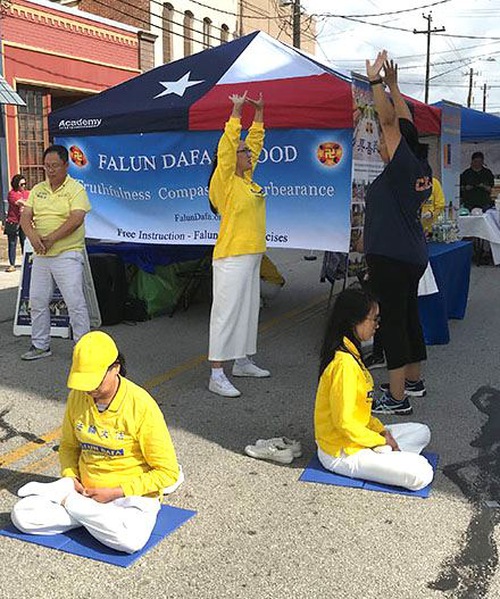 A practitioner teaching Brenda the exercises

Brenda then picked up some fliers and asked where she could really learn the practice.

“There is a group practice site in Houston,” she was told. “You can go there or get in contact with the practitioner in charge. You can also go online, watch Master’s exercise videos, and read Master’s Li lectures. Everything is free of charge.” Brenda said that she would go online and find out more about the practice.

Ming, a man from China who was visiting his daughter in Houston, stopped by the Falun Dafa booth to say that he occasionally watched New Tang Dynasty Television (NTDTV) and was well-aware of the persecution of Falun Dafa in China. When Ming expressed an interest in learning the exercises, a practitioner started to show him how to do them. After doing the first two exercises, Ming rubbed his shoulders and marveled, “My muscles and joints feel very relaxed. I feel very good.” Ming said he would learn more about Falun Dafa once he got home and also asked where he could read about practitioners’ cultivation experiences. 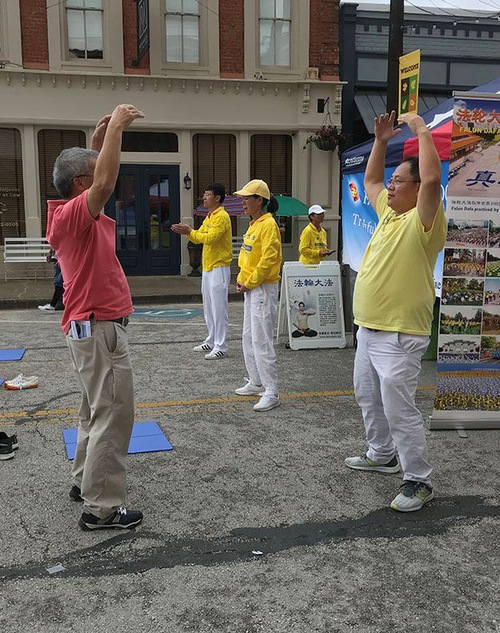 After Joanna learned the first exercise, she said, “The movements are very gentle. It stretches your limbs and relaxes them. This gentle practice is suitable for people of all ages.”

After Sandra and her friend learned the meditation exercises, Sandra said that she felt energy moving throughout her body. Rada, who learned the exercises from Suzy, said, “The movements are very easy to do. It makes you feel very comfortable.”

Falun Dafa attracted many local residents. Some did not understand why the Chinese Communist Party (CCP) would persecute a peaceful practice like this, so practitioners explained the facts and asked people to sign a petition calling for an end to the persecution. 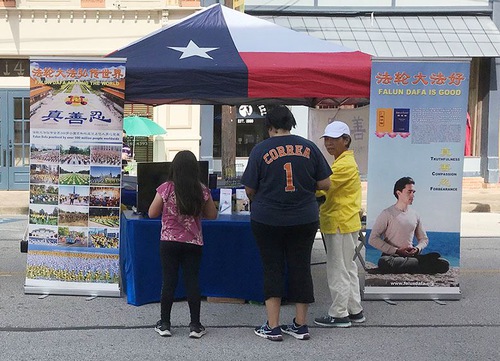 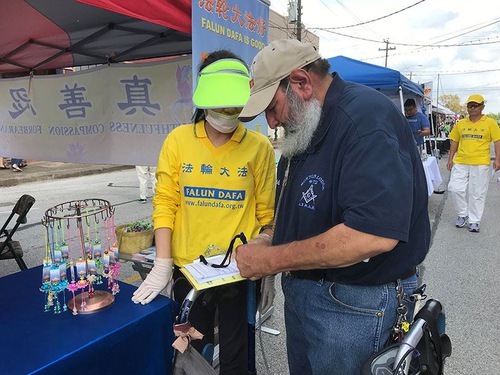 People sign a petition calling for an end to the CCP’s persecution of Falun Dafa practitioners in China.

Joe expressed his support as did many others who signed the petition and took fliers after learning the truth about Falun Dafa.

After a practitioner explained the situation to her, Ryan said, “Eliminating the CCP is a good thing. We should spread the call for freedom around the world.” Both he and his wife signed the petition and thanked the practitioners for raising awareness about Falun Dafa.

“74-year-old Woman Sentenced to Five and a Half Years”

“Woman Dies after Enduring Two Decades of Persecution for Her Faith”