(Minghui.org) As the Thanksgiving holiday approached, practitioners in Houston, Texas gathered at Arthur Storey Park on November 20 to do the exercises and thank Falun Dafa’s founder, Mr. Li Hongzhi, for the many blessings they have received after they began practicing. 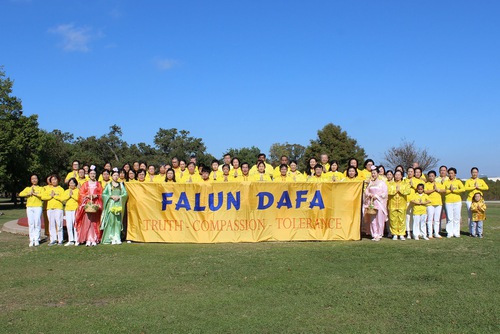 Software developer Ms. Guo started practicing Falun Dafa in 1999. As a college student she was confused about which path to take—her parents’ traditional values, or going along with modern society’s sometimes questionable trends. “When I read Zhuan Falun (the main teachings of Falun Dafa), I learned that no matter what, embracing the traditional values of being good is most important,” she recalled. She became clear on her path in life and how to get there.

She said she experienced extraordinary physical improvements through practicing Falun Dafa. “Insomnia bothered me for many years. After I began practicing it’s totally gone—as if I never had it. I fall asleep as soon as I lay down,” she explained, “I feel so good.” Her hereditary high blood pressure also became normal and she no longer needs to take medication.

Looking back through the years, Ms. Guo is grateful that Falun Dafa provided guidance and helped her handle stress at work and in daily life. “The principles of Truthfulness-Compassion-Forbearance can resolve all conflicts and I really thank Master Li for that,” she explained.

Ms. Bao, 84, vividly recalls how she began practicing 15 years ago. “We were on a family vacation. I enjoyed walking under a waterfall but after being soaked, I began to cough,” she said, “Examination at the hospital showed it was pneumonia.” During the more than three weeks she was hospitalized her daughter talked about her positive experiences after practicing Falun Dafa. Encouraged by her daughter, Ms. Bao began to recite “Falun Dafa is good” and “Truthfulness-Compassion-Forbearance is good.”

After she was released from the hospital Ms. Bao decided to look into Falun Dafa. She began to read Zhuan Falun and do the exercises, and was amazed by the changes in her health. In the past she often felt tired after doing routine family chores such as cooking, vacuuming, or cleaning the house. Her body felt so tense and painful that she sometimes massaged herself. “Falun Dafa changed all that,” she said. “I’m now full of energy, I easily do all the household chores, and I look forward to joining other practitioners to tell people about Falun Dafa and the persecution in China.”

The health improvement was accompanied by improvement in her character. Considering herself a family matriarch, she was upset when her two daughters did not follow her advice. After she read the teachings she was able to apply the principles of Truthfulness-Compassion-Forbearance in her daily life. Because she is now cheerful and open-minded her neighbors call her “the nice old lady.”

After witnessing the positive changes in her mother, younger daughter Tracy began practicing in 2010. Tracy understood that a practitioner should focus on being a good person and be considerate of others. She also stopped being attached to her own material gains. Both mother and daughter feel fortunate that Falun Dafa has helped elevate their character and improve their health. “We are so grateful for Falun Dafa,” Tracy said.

Ms. Chen suffered from tracheitis for years–thirty years to be exact. She did not know what to do. When she was 30 her condition worsened. Although she lived in Texas she dreaded winter. “The nasal congestion and coughing was horrible. Sometimes I could hardly breathe and had to go to hospital for intravenous injections.”

That is why she felt so blessed and grateful after she began to practice Falun Dafa. “It was as if I was given a new life,” she said.

This also included a new way of looking at challenging situations. In the past, she had lots of frustration related to family conflicts and money. The arguments between family members made her anxious.

After she began to practice Falun Dafa and follow the principles, she understood that one should be a good person who considers others first. The up and down relationships with family members and relatives became easier to handle, and she no longer worries about losses and gains related to material interests. “When aligning myself with the principles of Truthfulness-Compassion-Forbearance, I gained a new outlook on the environment around me and society,” she explained. “That is why I want to say: Thank you, Master!”

“Augsburg, Germany: Spreading the Truth About Falun Dafa to Residents of Augsburg”

“My Understanding about Denying the Persecution Fundamentally”