(Minghui.org) Falun Dafa practitioners held a truth clarifying event in Augsburg, Germany on November 20, 2021 to expose the criminal acts committed by the Chinese Communist Party (CCP) in its persecution of Falun Gong. Many passersby signed the petition to show their support of the practitioners’ efforts to call for an end to the persecution. The practitioners also held a car parade within the inner city and also in the suburbs, to bring the goodness of Falun Dafa (also known as Falun Gong) to people, and raise awareness about the CCP’s persecution. People applauded, and practitioners enjoyed the support of many passersby. 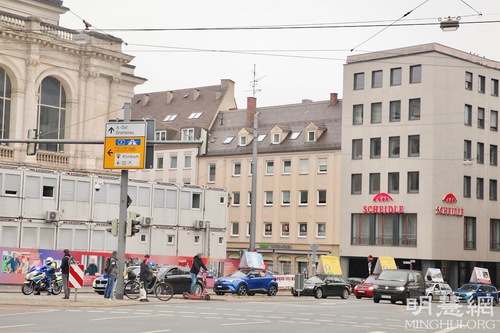 Falun Dafa practitioners’ car parade passes by the Staats Theater at the John-F.-Kennedy-Platz. 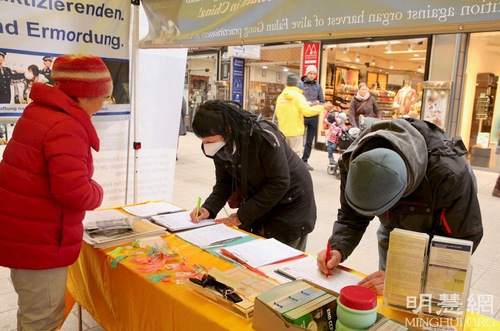 Residents sign the petition calling for an end to the persecution at the Dafa booth, put up on a pedestrian street.

Augsburg is a large city in the State of Bavaria, which is in southern Germany. It is located just a few dozen kilometers from Munich, the German capital. During the German Empire’s Heiliges Römisches Reich [Holy Roman Empire] era, Augsburg was a free imperial city, and is also known as Germany’s second ancient city. It is also the city with the most public holidays in Germany. Besides, it is the only German city that has its own official holidays – on August 8 the city holds its peace festival.

The Falun Dafa practitioners’ truth-clarifying car parade started at Augsburg’s Messe. It passed by many famous areas, including the Theodor-Heuss Platz, Rote- Torwall-Strasse, and the Kennedy Platz where the State Theater is located. The parade also proceeded through the suburban streets. With a police escort, the parade lasted three hours. Some of the residents watching the car parade waved, showed thumbs up, and took photos.

“Of Course All that Happened in China is Not Fair”

The exhibition booth that was set up along the pedestrian street in the inner city also attracted many residents, many of whom signed a petition to show their support for the Falun Dafa efforts to bring an end to the persecution.

“I have already seen similar events in Munich,” said Ms. Vlachon-Hein, “and already understood what this is all about. At that time, as I was in a rush, I did not sign the petition. Now, seeing the event, I will take the opportunity to sign the petition,” said language teacher, Ms. Vlachou-Hein, who signed the petition along with her daughter.

One well-dressed lady listened attentively as practitioners clarified the truth about Falun Dafa, the reason for the CCP persecuting people who live by the principles Truthfulness-Compassion-Forbearance, and the criminal act of the CCP’s organ harvesting from living Falun Gong practitioners, as well as many other truths.

She subsequently signed the petition to show her support for the practitioners’ efforts. She said that she herself came from Romania, a former communist country. She therefore clearly understood the true nature of the Communist Party and knows how the Communist Party treats its own people. After signing the petition, the lady even said that she wanted to learn Falun Dafa. The practitioner told her about the respective websites where she can find all the information needed to begin practicing, including a practice site near her residence.

“Falun Gong Is Not Actually Illegal in China”

“Houston, Texas: Practitioners Count Their Many Blessings at Thanksgiving”