Home > Persecution > Accounts of Persecution
90-Year-Old Woman Tried for Her Faith
Nov. 25, 2021 | By a Minghui correspondent in Jilin Province, China

(Minghui.org) A 90-year-old woman in Jilin City, Jilin Province is facing a prison sentence for her faith in Falun Gong, a spiritual discipline that has been persecuted by the Chinese communist regime since 1999. 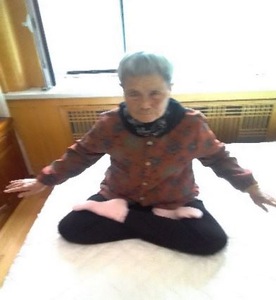 Ms. Cai was arrested on May 14, 2021, for talking to people about Falun Gong at a farmers’ market. The police pushed her into their police car, snatched her key, and ransacked her place. She was held in a metal cage at the local police station and released on bail a few hours later.

Ms. Cai took up Falun Gong in April 1996 and she credits the practice for quickly improving her health.

After the persecution started, the secretary of the local residential committee urged her to give up practicing Falun Gong. She insisted that she has benefited from it so much and she couldn’t give it up.

The police from Beishan Police Station attempted to harass her in late May 2017, but she wasn’t home when they came.

“China Fahui | My Journey of Returning to True Cultivation”