(Minghui.org) Falun Dafa practitioners held group exercises in central Auckland as well as parks by the sea in two districts on Sunday, November 21, 2021. The peaceful music and slow gentle exercise movements drew many people who stopped and watched.

As COVID 19 restrictions are further relaxed in New Zealand, gatherings of less than 25 people are allowed as long as a social distance of 2 meters apart are observed. 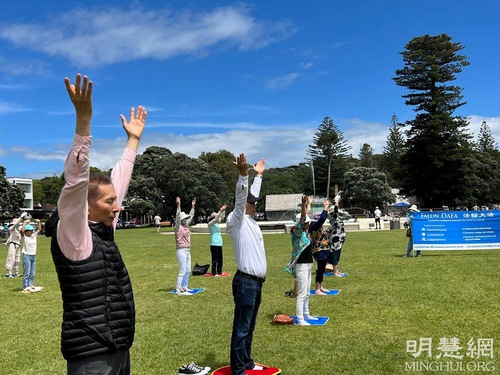 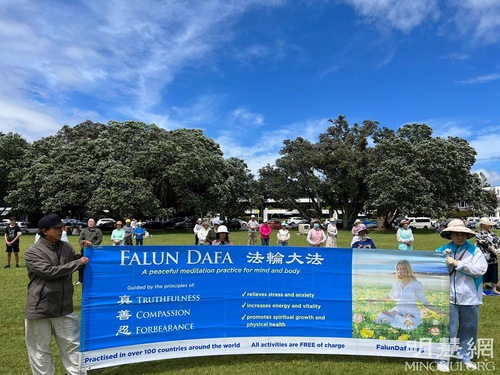 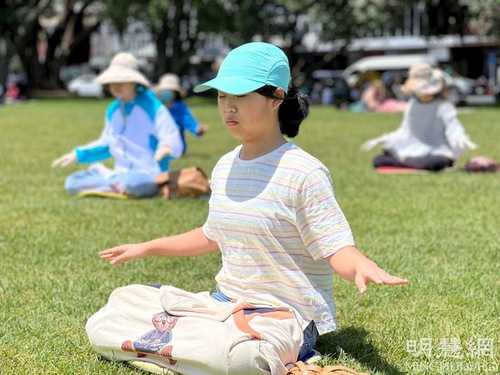 We Should Promote the Values of Truthfulness, Compassion, Forbearance 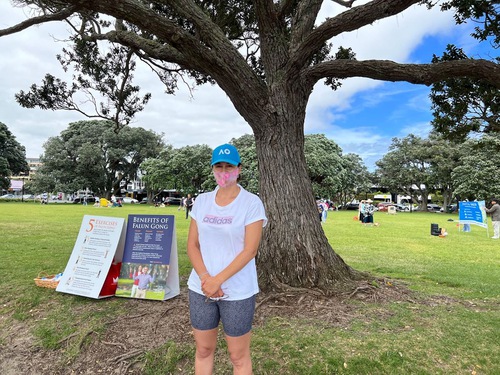 Divena Busby praised practitioners for their contribution to the community.

Divena Busby is a born and bred New Zealander who owns a cleaning business. While taking a walk by the sea, she noticed practitioners serenely doing the exercises and stopped to watch. She said, “I’d like to meditate. I know this is good for me but I am usually too busy with work and life. I cannot calm down. To me, not only does this take a lot of determination, one must also be able to persevere—it is not easy.”

She praised practitioners for teaching people the exercises free of charge, and said, “This is a great contribution to our community. This is not just exercise but it gets people in our community together. Nowadays, people are immersed in electronic gadgets and contact with the outside world has become rare.” She added, “Furthermore, the principles of Truthfulness, Compassion, Forbearance teach people to get along well with one another, and have empathy and compassion. Such amazing values should be promoted.”

Divena found it hard to believe the Chinese Communist Party (CCP) is persecuting Falun Dafa and other religious groups. She said, “The behavior of the CCP is terrible. Western societies are closely following what is happening in China. We find it difficult to understand why Chinese citizens still don’t have human rights in 2021. The CCP uses brainwashing tactics to control its people. If what Chinese people get is censored information, how can they know the truth? I grew up in New Zealand. From birth, I have enjoyed democracy and freedom of speech. I really cannot imagine what it is like for Chinese people.” 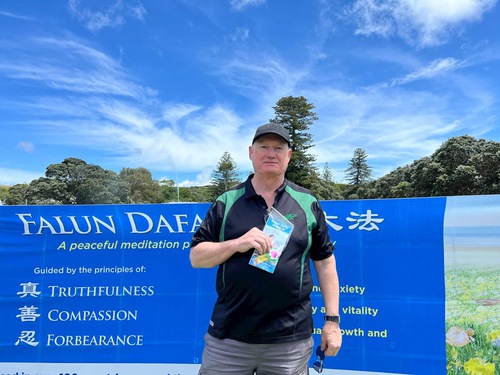 He expressed deep interest in Eastern spiritual teachings and even studied the Book of Changes. He also meditates for 45 minutes daily. He said: “Whether it is Eastern or Western traditional culture, they all teach people the same things and in the end lead one back to heaven. If you cannot achieve this in this life time, then there is hope in the next life. In the process, the most difficult part is to transcend oneself and fight against one’s various bad thoughts. I realized in the end that it is truly not an easy thing to overcome one’s personal things. Cultivating oneself is the hardest thing. The values of Truthfulness, Compassion, Forbearance are wonderful. Forbearance requires great willpower. One can do it by giving up everything ultimately.”

He also said, “I know a little about Falun Dafa because my wife and I saw a Shen Yun performance two years ago. I remembered it was a spectacular show, there was a giant backdrop bearing information on Falun Dafa. The dancers’ beautiful costumes were unforgettable. To be able to receive spiritual guidance before one dies is such a fortunate thing. The CCP is an evil political power for persecuting Falun Dafa practitioners and communist ideology is their political expression.”

The CCP Should be Punished in International Courts 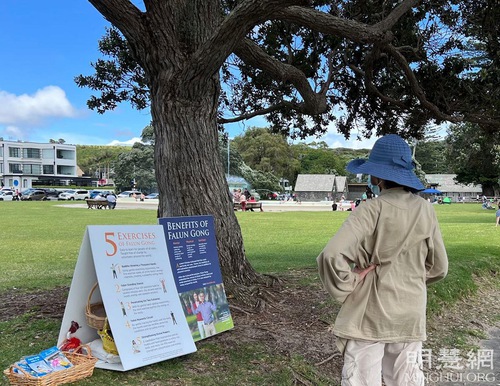 Lynn read the information on the display boards and learned about the persecution of Falun Dafa in China.

Lynn is a yoga instructor. She said, “Falun Dafa helps people feel calm and focused. Everyone can benefit from this kind of meditation because it helps people to calm down amid their busy lifestyles. This is very important. Why is the CCP suppressing Falun Dafa? I think they should admire and be proud of it because Falun Dafa came from China; it is part of Chinese culture. It benefits everyone, not only Chinese people.”

She continued, “The methods used by the CCP to persecute Falun Dafa are crimes. The perpetrators are criminals and should be punished in international courts. You should continue what you have been doing. Let people see you and promote this mind-body practice. This is not only for Chinese people, but for everyone in the world.”

“Looking Within and Doing Steadfast Cultivation”

“China Fahui | Eliminating My Fundamental Attachments During the “Zero-Out” Campaign”