(Minghui.org) Today's news from China includes incidents of persecution that took place in 12 cities or counties in 8 provinces, where at least 52 practitioners were recently persecuted for their belief. 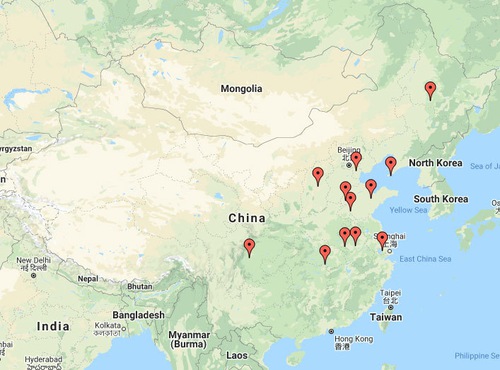 About 35 practitioners were arrested on October 28, 2021. It was said that they were under cellphone and camera surveillance for several months. Some practitioners were released on bail. The rest were held in Yutai County and Liangshan County.

Ms. Zhu Mei was sentenced to two and a half years in prison by the Jinnan District Court on October 22, 2021. She was arrested by officers from the Jinnan Police Department on September 24, 2019, and has since been held in the Dongli Detention Center.

Ms. Zhu Ruiying, 75, was arrested at home by officers from the Xiaoyaojin Police Station on the morning of April 21, 2021. The officers ransacked her home and seized 15 copies of Falun Gong books, a picture of the founder of Falun Gong, and other items. She was interrogated in the police station.

Ms. Sun Fangyun, 65, was arrested at home at noon on the same day. During the interrogation, the officers said they had stalked the two practitioners for over two months and brought out photos taken of the practitioners talking, shopping, and asking for directions. Ms. Zhu was taken to a detention center. But the center did not admit her because of her poor health. Both practitioners were put under residential surveillance.

Mr. Wei Shaoming drove to Shanghai for business. During the hotel check in, he was put in police custody because his identity card showed he did not sign the three statements renouncing Falun Gong. Officers from Honghu City came and took him to the Honghu Brainwashing Center.

Zhao Qingxiang (gender unknown) was arrested on the afternoon of November 3, 2021, after someone reported when Zhao talked to people about the persecution of Falun Gong. Zhao was interrogated in a police station for several hours and then brought home. Officers ransacked the place, seized all Falun Gong books and two bags of related materials. Zhao has been in police custody since.

Ms. Chen Huan is being held in the Dalian City Detention Center.

Ms. Zhang Yuping was arrested by officers from the Wenmiao Police Station for exchanging paper currency with Falun Gong messages printed on them. She has been held in the Taiyuan City No. 4 Detention Center for five months. Her case is in the Yingze District Court. Her husband, following the law, went to register as her defender in the court. The judge’s assistant stopped him from doing it.

Ms. Wang Xiumin, 82, of Shouguang City, has been repeatedly persecuted since the Chinese Communist Party (CCP) started persecuting Falun Gong practitioners in July 20, 1999. Her home was ransacked. She was stalked, arrested, forced to walk down the street while being publicly humiliated, and was taken to a forced labor camp.

Around 11:30 a.m. on November 7, 2021, seven or eight officers from the Shouguang Police Department and police station knocked on her door. She did not open it. They called her son, ordered him home, and made him open the door. Without displaying a warrant, they searched her home, photographed and videotaped it, and left.

Zhou (first name and gender unknown) was harassed at home for one hour and a half on October 18, 2021 by two agents from Dongchangfu District Political and Legal Affairs Committee, two clerks from Liuyuan Community Office, and three officers from the local police station.

Zhou was harassed at home for an hour on October 20, 2021 by eight or nine people, including two agents from the Dongchangfu District Political and Legal Affairs Committee, two clerks from Liuyuan Community Office, and two from the provincial government.

Zhou was harassed at home on November 4, 2021, by Bai and Xue from the Dongchangfu District Political and Legal Affairs Committee, Zhi from Liuyuan Community Office. Zhi left in ten minutes. The other two left in an hour.

The son of Xu (first name and gender unknown) was harassed at work on November 5, 2021, by Bai and Xue from the Dongchangfu District Political and Legal Affairs Committee.

Mr. Yu Kaixin, a retired teacher, left home to avoid being persecuted and relocated to Wenjiang District in 2018. He has been missing since August 2021.

Mr. Sun Yubin, in his 70s, was arrested by officers from the Xiangjiang Police Station on October 13, 2021, when he was posting Falun Gong flyers along a street. He is being held in the Chiping District Detention Center.

“Saving People is My Sole Wish”