(Minghui.org) At this year’s annual “Family Days” on September 25-26 in Port Orange, Florida, hundreds of vendors offered their goods or services. Falun Dafa practitioners from Northeast Florida participated with an information booth. 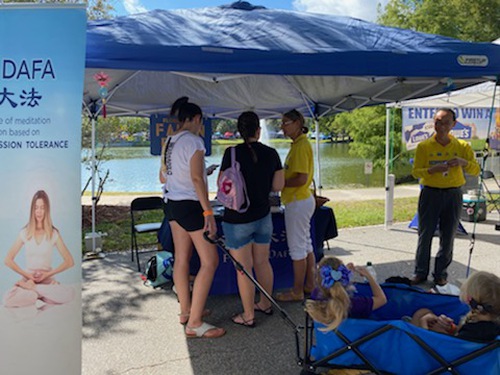 It was a sunny weekend and thousands of people accompanied by their children and dogs flocked to the beautiful park at the City Hall, where the event took place. Soon the Falun Dafa booth was crowded. Some people wanted to learn about the meditation practice, some stopped to sign petitions to “end forced organ harvesting” or “end the Chinese Communist Party (CCP).” Visitors of all ages enjoyed the charming paper lotus flowers, and the practitioners could hardly keep up with folding them.

A woman who stopped at the booth mentioned that she subscribed to the Epoch Times, so she was familiar with Falun Gong and the persecution in China. She really wanted to know more about Falun Gong (also known as Falun Dafa) and how to learn. She said that she had read about the forced organ harvesting atrocities and asked to take several information pamphlets to give to other people.

Another young lady was very happy to find the Falun Dafa booth and said she had been looking for something like this. She was drawn to the positive energy and peacefulness of the practice.

Another woman rushed up to the Falun Dafa booth and said, “Where can I sign to oppose the CCP? I am here just to do this.” She then talked about the worldwide situation, especially the suppression in Cuba and the lies that had been spread to deceive people. She was well informed about organ harvesting and communism.

A fellow with the Baptist Church had his booth right across from the Falun Dafa tent. In the afternoon before the event, he came up, asking if he could help set up the tent. The next day during the event, he asked what Falun Gong practitioners thought was the meaning of life. A practitioner explained the Dafa principles to him. The young man was surprised at how similar their understanding was, and sensed something very spiritual about the Falun Dafa group. He mentioned that he had meditated before and that he might come out sometime to the local practice site.

One gentleman, a former member of the military, approached the tent and learned the exercises. He knew about the communist infiltration in our communities. He said that he was looking for something like this after he lost his chiropractor. He left with a smile on his face.

The event was a big success. A lot of visitors showed interest in learning the exercises and took down the practice site information, and many were attracted by the tranquil exercise music. For the practitioners, holding the booth felt like being “home in heaven.”

“Japanese Participate in Online Classes: “Falun Dafa Is a Door to a Better Future””