In traditional culture, another color on par with the golden color is purple. There is also a well-known Daoist anecdote “Purple Qi Coming from the East.”

It tells that when Laozi, founder of Daoism, was leaving the Zhou Dynasty to become a hermit, he was to pass the Han’gu Pass. Before his arrival, Yin Xi, a senior officer guarding the pass noticed a stream of purple air coming from the east and he realized that a saint would be coming this way. Sure enough, not long after that, Laozi arrived on the back of a blue-green ox. Yin begged Laozi to write down his teachings, and became his disciple. This was how the book Daode Jing (Tao Te Ching) came into being, a classic that has been passed down through the ages.

People generally regard purple as an auspicious color, which is also a typical color for Daoism. For instance, the place where an immortal lives is called “Purple Mansion,” and Daoist scriptures are also referred to as “purple books” in Chinese.

Due to its extraordinary origin, “purple” quickly became a noble symbol in traditional Chinese culture. It is said in Volume 48 of Hou Han Shu (The Book of the Later Han): “There is a Ziwei Palace in heaven, where the divine emperor resides. Likewise, kings also build palaces in this way.”

Ancient Chinese people believed in harmony between heaven, earth, and mankind. Therefore, the layout of a city should also conform to settings in heaven. Since the divine emperor lives in the Ziwei Palace in the upper realm, and the North Star (also known as Ziwei Star in Chinese) has always been revered as the “Emperor Star,” an emperor on earth (often revered as the “Son of Heaven”), should therefore have a residence corresponding to the purple palace in heaven as well. In fact, in the Sui and Tang dynasties, the imperial palace in the capital city Luoyang was indeed called “Ziwei Palace” (purple palace); in the Ming and Qing dynasties, the royal palace was also named “Zijin Cheng” (purple Forbidden City).

We can see that both golden and purple colors are much treasured in traditional Chinese culture. Although the two colors look quite different on the surface, they are not contradictory to each other. In fact, the two colors are often mentioned together.

For example, the term “zijin” (purple golden) is used extensively in the description of Buddhas in Tripitaka. In the Sutra on the Sea of Samādhi Attained through Contemplation of the Buddha (Guan Fo Sanmei Hai Jing, also commonly known as “Samādhi Sea Sutra”), Buddha Shakyamuni is so described: Buddha Shakyamuni, “radiant with purple golden light, appeared in front of his disciples.” “Purple golden” was also frequently used in the description of other Buddhas. For example, the Vipassī Buddha was said to have a “body in purple golden color.” Kassapa Buddha was described as having a “body in purple golden color, with perfect fine looks”...

Many people in the cultivation community understand that a color can show different color tones in different dimensions. Even everyday people may experience this. For instance, if you keep staring at the color red for a while, and then close your eyes, a green afterimage may appear in front of the eyes. Some research studies have also found that the metal gold can also appear as purple.

As we know, matter is made up of microscopic particles. Take gold for example, if the size of gold nanoparticles is changed on the microscopic-level (1 nanometer equals 0.000001 mm), they may show various colors as colloidal suspensions in a fluid (gelatin or water). The colloidal gold nanoparticles below 100 nanometers would make the solution red in color, while particles above 100 nanometers will make the solution blue or purple. Of course, no matter what color they appear, the substances are essentially gold. Please refer to the following picture as an illustration. 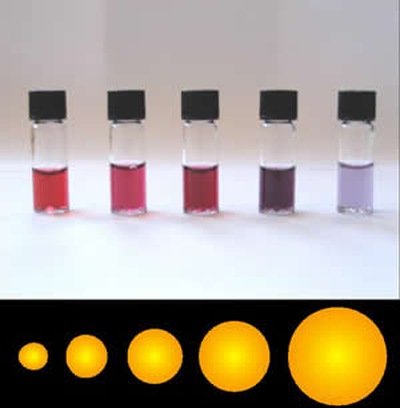 Experiment on gold nanoparticles color from red to purple

Such phenomenon may remind people of certain descriptions in some classics. For instance, when describing the paradise of gods and Buddhas, it is said that everything is golden and shiny. But when one takes a closer look, beings and things in that world all have their own colors. People who are restricted by their modern mechanized way of thinking may consider the content in those classics self-contradictory, when in fact it could be their own rigid and dichotomous thinking that prevents them from exploring things in higher-dimensional space-time. Moreover, gold also varies at different levels, and would appear differently when examined in depth...

There are also purple golden paint pigments in fine art. A well-known example in history would be Cassius’scher Purpur from Germany in the 17th century. Michael Faraday, an English physicist in the 19th Century, found in his research that the composition of this pigment is actually extremely fine gold particles.

Of course, people today would not use gold to make purple color. However, before the modern industrial civilization took shape, the extraction of pigments relied very much on natural materials.

In the East, raw materials used to make purple color were also rather scarce. In ancient China, purple dyes were generally extracted from the roots of low-yield comfrey plants, so a large quantity of comfrey was required, and the dying process needed to be repeated a number of times to achieve the desirable outcome. Even so, the color tended to fade easily.

In the West, people used to extract purple color from the secretion produced by a number of species of small rock snails, known as “Murex.” Because the secretion from each snail was tiny, and the operation was cumbersome and labor intensive, the purple dye was highly valued and the price was extremely high. Some people also extracted purple color from the juice of European blueberries, but the color was a bit too bluish, and could not be compared with the Murex purple. There were also other sources with very low yield, so we will not discuss them here.

The scarce and expensive raw materials needed to make purple color gave it a very high market value in ancient times, and made this color more precious in the secular world both in the East and West. For example, in the Tang dynasty of China (618-907), only third-rank officials and above were entitled to wear purple official robes, and it was absolutely off-limits to the ordinary people.

In the West, Emperor Caesar was known to like wearing purple robes, and gradually purple became a noble and precious color as a tradition. Hundreds of years later, the Byzantine royal family even used “Born in the Purple” (Porphyrogenitus) to favor the rights of sons born during the reign of their parents, over their siblings born before their father ascended to the throne. The notion was later loosely applied to all children born of prominent or high-ranking parents to indicate their noble origin.