The resolution, passed during the NFRA’s bi-annual convention in Scottsdale, Arizona, urged the CCP to immediately stop the persecution of Falun Gong that has been going on for 22 years.

The resolution further called on the U.S. Congress and states to pass legislation to combat the horrific crime of forced organ harvesting and help stop the persecution. It also urged the U.S. State Department to stop issuing visas to those involved in the organ harvesting crimes.

Resolution Sponsor: “Holding the Communist Party of China Accountable for the Atrocities” 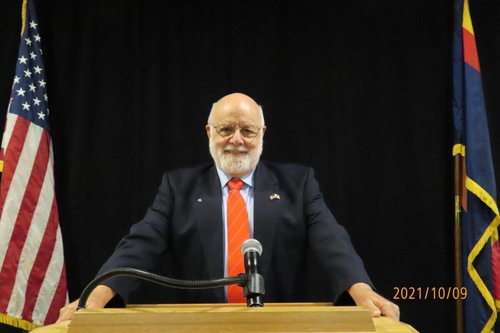 Mr. Reece wrote a letter to the Solano County news outlet Daily Republic after the passing of the resolution in 2018: “It’s an issue which I trust will motivate the general public and our elected officials to action once they become aware of this inhumane and deplorable treatment of the citizens of China.

“I trust as you get informed about this and similar issues, you will join with others in opposing such atrocities, seek and vote for leaders who take a stand against this evil, and pray for revival in our land and throughout the world.”

With the same motivation, Mr. Reece proposed the resolution again at this year’s NFRA convention, hoping to draw more attention to the atrocities taking place in China. He said in an interview with The Epoch Times that he believes “it’s important to continue holding the Communist Party of China accountable for the atrocities that they’re doing. This is one of the worst [religious persecutions].”

Mr. Reece also told a Minghui correspondent that many of the delegates, who hail from 23 states, thanked him for proposing the resolution and he was glad to see the attention it’s getting.

“I just keep praying the message to get out and people get serious by how terrible the organ harvesting is.” He added that it’s a “pleasure to be able to do the right thing. You should stand against evil, but it takes commitment and courage.” He thanked Falun Gong practitioners for their persistent efforts in raising awareness about the persecution and standing up against the CCP.

Mr. Reece said that many people have noted that the major media outlets rarely report on the topic of organ harvesting, either because they were threatened or they receive funding from the CCP.

He hopes that grassroots movements like the NFRA can play a bigger role in awakening the public and helping stop the persecution. He noted that it’s a “now or never” moment for the U.S., and urged more people to step up to take action and stop being bystanders.

Resolution to stop the People’s Republic of China’s religious persecution and organ harvesting of prisoners.

Whereas the United States Department of State Country Report on Human Rights for China for 2014 stated, “Advocacy groups continued to report instances of organ harvesting from prisoners”;

Resolved, That the National Federation of Republican Assemblies calls on the Congress of the United States as well as the Legislatures of the individual States to pass legislation that:

(3) demands an immediate end to the 22-year persecution of the Falun Gong spiritual practice by the Government of the People’s Republic of China and the Communist Party of China, and the immediate release of all Falun Gong practitioners and other prisoners of conscience;

(4) calls on the People’s Republic of China to allow a credible, transparent, and independent investigation into organ transplant abuses; and

(5) calls on the United States Department of State to conduct a more detailed analysis on state-sanctioned organ harvesting from non-consenting prisoners of conscience in the annual Human Rights Report, and report annually to Congress on the implementation of section 232 of the Department of State Authorization Act, Fiscal Year 2003 (8 U.S.C. 1182f), barring provision of visas to Chinese and other nationals engaged in coerced organ or bodily tissue transplantation.

“Podcast (Cultivation): “Weathering All Difficulties and Steadfastly Awakening People in Hong Kong Through Our Media””

“Cultivation Experiences of a Taiwanese Doctor”