(Minghui.org) When a grumpy child turns good, when a selfish boy becomes considerate, when a student with learning difficulty starts to read on his own, and when an unhappy girl becomes optimistic, you know something amazing is happening.

These positive changes were experienced by Ms. Wang Yuqing’s elementary school students. After suffering a major blow in 2019, Ms. Wang began to practice Falun Dafa. The principles of Truthfulness-Compassion-Forbearance not only gave her hope, but also changed her life and brought positive changes to her students. 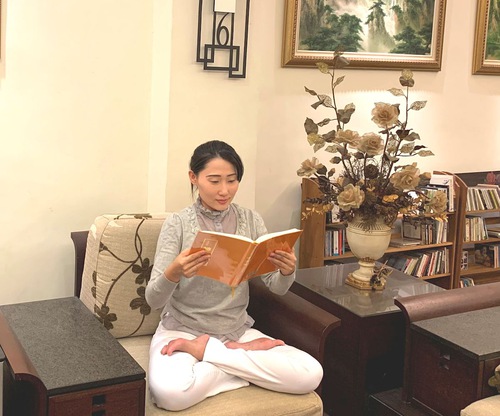 Yu was a problematic student who had transferred in from another school. When Ms. Wang read the notes from his previous teachers, from first grade to third grade, she was shocked. There were nearly 60 notes containing descriptions of Yu’s violent behavior, how he talked back and swore at teachers, spat on classmates, his lying, as well as disobeying his parents.

Ms. Wang’s classroom was already full and some students had emotional problems and difficulty focusing. This new addition worried Ms. Wang. But she remembered that she practiced Falun Dafa and followed the principles of Truthfulness-Compassion-Forbearance. Realizing that this was not accidental, she decided to handle the situation as a Dafa practitioner.

Once, because of a long line, Yu and another student Kai started to argue and then fought. Ms. Wang told them to stop and told them the principle of “no loss, no gain” she’d learned from Falun Dafa. Kai stopped and said he was sorry. But Yu did not give up and said he needed to hit Kai back to get revenge. Recalling the other teachers’ notes about Yu always seeking revenge, Ms. Wang explained, “I recently read a book and it is very good. How about we read it together during our noon break?”

During the noon break, the boys went to Ms. Wang and read Zhuan Falun (the main teachings of Falun Dafa). In the beginning, Ms. Wang thought the book might be a little difficult for them. But Kai, who had reading difficulties, was able to read the introduction, “On Dafa.” Yu joined him and they took turns reading the book.

After they read Yu said, “I know we are from the heavens, just like ToTo and Ahya in the animated movie, Heavenly Kid.”

“I also know there are fairies behind the clouds,” Kai continued.

The two boys excitedly began talking about their understandings and forgot all about their argument.

One day Yu asked Ms. Wang, “What is the opposite of Truthfulness-Compassion-Forbearance?”

“It is lies, being evil, and fighting,” she replied.

Yu nodded and thought for a while. The next day he gave Ms. Wang a note on which he wrote, “Thank you, Teacher, for being so nice to me and giving me the book Zhuan Falun to read.”

Every day since then Ms. Wang, Yu, and Kai read Zhuan Falun during their noon break. Both children focus the entire time they read. Usually, when the class read together in the morning, Yu used to sit idle or make trouble. Now he often borrows the book (Zhuan Falun) from Ms. Wang to read. He’s always in a good mood after he reads the book.

In the past, Yu swore at teachers and attacked classmates. But his behavior changed. “Yu used to swear. I have not heard him saying those things for a while,” one child said.

“He often looked for me and started a fight. He has changed,” another child remarked.

“When someone asked Yu to carry the food container in the past, he often complained and asked why it was always him. Now, he even offers to help when it’s not his turn,” someone else added.

“Not only that, he also apologizes when something happens and says he’s the one who did wrong,” another child said. They were all curious: how could a book change him so much?

After reading Zhuan Falun, Yu began to read Hong Yin. Sometimes he memorizes four poems in one morning. The more he recites them, the more he enjoys them. He even hand copied some of them. Motivated by his example, other students joined him in reading Zhuan Falun, and memorizing or hand copying Hong Yin. They also decided to meditate during their break at noon. “After the students and I meditate at noon, the classroom is very quiet and peaceful,” Ms. Wang said. 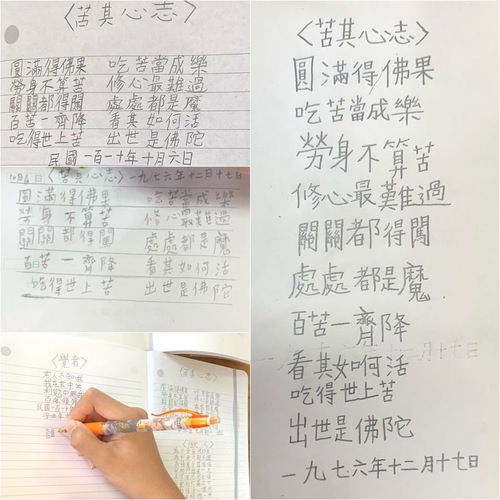 Qiao is Yu’s neighbor. When Yu first joined the class, he often argued with Qiao and even fought with her. Worried that her daughter was being bullied, Qiao’s mother told her to stay as far away from Yu as possible. But after Yu became mild and polite, Qiao’s mother was surprised. “The positive change is almost unbelievable!” she told Ms. Wang.

Influenced by Yu, Qiao began to read Zhuan Falun. After reading “On Dafa,” she closed the book and said, “I feel so good.” Since then, she often borrowed the book from Ms. Wang. “When I read the book, I’m really immersed in it, as if time has stopped.”

When it was Qiao’s turn to clean up, she usually delayed and waited until the teacher reminded her several times. One day she asked Ms. Wang, “If I finish cleaning up earlier, can I borrow Zhuan Falun to read?” When Ms. Wang said yes, she quickly finished eating lunch and cleaned up so she could spend the remaining 20 minutes reading Zhuan Falun.

Qiao’s mother told Ms. Wang that because of problems in her marriage, Qiao easily got depressed. After she began to read Zhuan Falun, however, she changed a lot. From a selfish, lazy, and picky girl, she became someone who is considerate and kind.

Qiao often brought Zhuan Falun home for her mother to read. Her mother said she also gained a new perspective from the book. “I used to worry a lot, thinking my daughter had some extreme behavior because of my marriage problems,” she explained. “Now seeing her happy and mature, I really want to thank you.”

“You don’t need to thank me – it is all because of Falun Dafa,” Ms. Wang said with a smile.

Dan was diagnosed with a mental disorder. He easily became agitated and cried a lot. Sometimes he needed medication every day. After he joined others in reading Zhuan Falun, he also changed a lot.

One time when students were lining up, someone told Ms. Wang that Dan was pushing the others. Ms. Wang went to him and asked, “Are you willing to give de (virtue) to your classmate by acting badly?”

If this had happened in the past, Dan would have stomped his feet and yelled. This time, however, he quietly went to the end of the line.

Other times when Dan misbehaved Ms. Wang asked him, “Are you following the principles of Truthfulness-Compassion-Forbearance?” Now, instead of arguing and talking back, Dan listens to Ms. Wang and corrects his behavior.

For students with mood disorders, the school arranges a meeting with their parents each semester to discuss their situation. Dan’s mother had to leave work for the meeting no matter how busy she was. But soon after he began reading Zhuan Falun, the school counselor, special education teacher, and Dan’s mother all noticed his positive changes. In fact, he has improved so much that the school staff no longer asks to meet with his mother.

Born into a wealthy family, Yun is much younger than her siblings. Her parents spoiled her. As a result, she did not listen to anyone and was very stubborn. After she started reading Zhuan Falun, her bad behavior also changed.

One day Yun had to carry some heavy food containers upstairs. “No one helped me and I had to go back and forth many times,” she told Ms. Wang, “but this time I was not upset since I know that doing it without complaint can accumulate de (virtue).”

Yun’s mother also noticed her daughter’s changes and said, “In the past, she often argued with her sister. But now Yun no longer talks back,” she said. “I am so happy!”

Golden Light from the Book

Bing is one of the children who meditates at noon. When Yu recited poems from Hong Yin, he listened attentively. When Bing read Zhuan Falun for the first time, he was very serious and calm. “While I read the book, I noticed a soft golden light coming from it," he told Ms. Wang.

When it was their turn to clean the bathroom, Bing and Yang argued with each other. When someone told Ms. Wang about it, she came over and said, “Maybe both of you feel wronged. But if you can remember that this is an opportunity to improve your xinxing, you will handle it well.”

Both boys calmed down. Bing was in tears and said, “I am sorry. I should not have yelled.”

“I shouldn’t have flipped the toilet water on you,” Yang said.

Both of them bowed to each other to apologize. Then they happily finished cleaning the bathroom.

When she encountered challenging students in the past, Ms. Wang used to be frustrated. Despite trying various methods, the outcome was often not satisfactory. Sometimes she counted the days until it was time for class reassignments.

After she began practicing Falun Dafa, however, Ms. Wang realized that only Dafa and the principles of Truthfulness-Compassion-Forbearance can change a person’s heart. When she encountered difficulty again, she was able to remain calm and assured – she knows that Master Li, the founder of Falun Dafa, gives her wisdom and that compassion resolves all conflicts.

As for her students, Ms. Wang knows that these young souls are nurtured and guided by the principles of Truthfulness-Compassion-Forbearance and their futures have changed for the better. If Falun Dafa can help these children, she knows it can help all the world’s people.