(Minghui.org) The Conservative Party of the UK held their annual meeting in Manchester, England’s third largest city, on October 3-6, 2021. Falun Dafa practitioners from Manchester and surrounding cities held an event on the main street near the city centre square. They introduced Falun Dafa and told people about the persecution of the spiritual practice in China.

Practitioners displayed banners and information boards, and clarified the truth to passersby through exercise demonstrations and distributing fliers. Many people signed the petition to show their support. They said that they were shocked by the on-going 22-year-long persecution of Falun Dafa practitioners by the Chinese Communist Party (CCP). 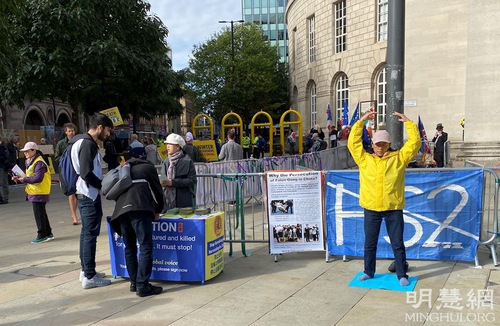 Student from China: I Just Want to Listen to the Truth

Three international students from China stopped by the practitioners’ booth. One young man listened attentively as a practitioner clarified the truth to them. When the two young women urged him to leave, he said, “I just want to listen to the truth.”

When the practitioner told him that millions of Chinese quit the CCP and its youth organizations to avoid being implicated, the young man said that he heard about it when he was touring Taiwan, and he already quit the CCP. Before leaving, he happily accepted a flyer and said that he would ask both of his friends to read it.

A lady noticed practitioners demonstrating the exercises and was very interested in Falun Dafa. She said that she practices Tai Chi and has an online television station where she often broadcasts programs related to Tai Chi. She interviewed a practitioner and said that she wanted to include information about Falun Dafa in her television broadcast so that more people can learn about it.

Manchester Metropolitan University’s school magazine reporters, Mr. David Smith and Mr. Samir Aslam, also stopped and read the information about the persecution. They said they knew long ago about the human rights violations in China but this was the first time they heard about Falun Dafa. They interviewed local practitioners and said they would publish the information in the school magazine.

IT Engineer: Our Government is Doing too Little

Mr. LK, an IT engineer who works nearby, passed by the practitioners’ booth with his friends during their lunch break. As soon as he read the banner, he walked directly to the counter and signed the petition. He said, “Our government is doing too little.” He said that he’s known about Falun Dafa and the persecution for years but the UK government has not yet done much about it. He also asked his friends to sign the petition to show their support for practitioners’ efforts to stop the CCP’s persecution.

Mr. LK knew a lot about China and said that he frequently watches videos about China on social media. He said, “The CCP will definitely meet its downfall in the near future.”

“The CCP is Fascist”

Numerous groups were also holding activities near the practitioners’ site. A group of people came over when a practitioner had just set up the displays one morning. One man seemed to belong to an animal protection organization. He took a truth-clarifying flyer and said that he had heard about Falun Dafa before.

The practitioner told him how Dafa is practiced around the world and how the CCP persecutes it. The practitioner pointed out that people believe that many phenomena in the world today, including the coronavirus, are related to the CCP. The man immediately agreed and said, “The CCP is fascist.”

Artist: “He is an Angel” 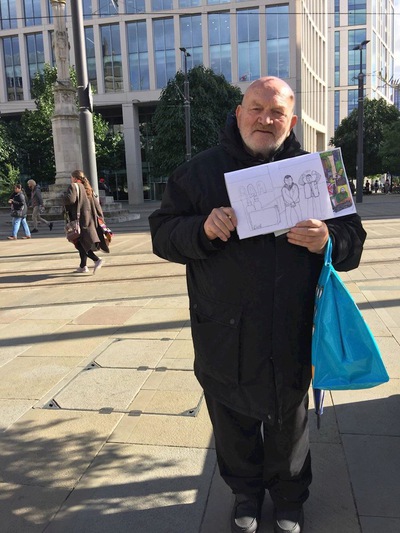 Artist Mr. Elton Darlo drew a portrait of a practitioner.