(Minghui.org) Huyen Tran is a Vietnamese Falun Dafa practitioner residing in Sydney. She is in her 60s and looks high-spirited. No one would ever imagine that she was so miserable 6 months ago. She suffered from muscular dystrophy that she had suffered for 10 years. She recovered after she practiced Falun Dafa for 6 months and no longer suffers from illnesses, lives in peace and happiness, and has hope. 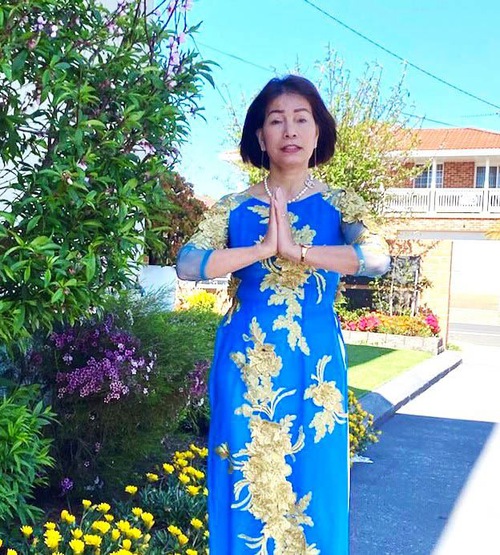 She regained her health after practicing Falun Dafa. “I am grateful from the bottom of my heart,” she said, “as Master Li Hongzhi, Falun Dafa’s founder, gave me a new life. Practicing Falun Dafa is the most precious and meaningful thing I have ever done in my life.”

Living Miserably Due to Painful Illnesses

Huyen grew up in the North of Vietnam. She immigrated to Australia 20 years ago in pursuit of a good life for herself and her family. Like all new immigrants, she had to work very hard to raise her four children. Her life improved 10 years later. Her four children grew up, she had some savings, and lived comfortably.

But, unexpectedly, she suffered a stroke. She couldn’t open her right eye. “I had a brain check-up in the hospital,” she said. “The doctor couldn’t find the reason initially. Then, I was diagnosed with muscular dystrophy. Western medicine doesn’t have any effective treatment for it, so I had acupuncture treatments. I could open my right eye three months later. My happiness didn’t last long, however. I couldn’t open my left eye. I continued the acupuncture treatment and took medicine. The acupuncture didn’t work this time. I had to resort to Western medicine. I was on Western medication for three years but my health didn’t improve.”

She started to take painkillers because the pain lasted longer and longer. The painkillers caused problems with her liver, kidneys, and stomach. She couldn’t open both of her eyes in 2014. She felt excruciating pain in her face and head. Sometimes she had to press her head onto the floor to ease her pain. She had to lean on the wall to move her body to the table when it was time for meals. She thought of ending her life many times because she could no longer bear the long-term pain.

She had eye operations 6 times – from 2014 to 2021, before she could finally open her eyes. The muscles on her face were still shrinking and tight. She felt pain all the same. Everything was blurry. “I had to do the acupuncture and massage treatments to ease the pain.” She said, “I have spent most of my savings during the years of treating my illnesses.”

She watched a program discussing Falun Dafa in late 2019. She became interested in this program because it taught people how to be good. Besides, many people recovered from their illnesses after they practiced Falun Dafa. She learned the 5 sets of the exercises. However, she couldn’t see clearly the exercise demonstration given her bad vision. She didn’t do the exercise movements correctly, so she still experienced sickness tribulations.

She said, “I understood many principles after I read Zhuan Falun. Master Li told us in the book that the purpose of life was to return to one’s true self. I realized that this was the true meaning of life, something I had long been looking for. I used to have stomachaches due to the medication I have taken for so many years. I had to go to the toilet 20 or 30 times every night. I got the flu every year despite having a flu shot yearly. I recovered from all the illnesses after I practiced Falun Dafa for 6 months. Amazingly, my eyes recovered too. I can see things and read, just like everyone else.”

Ms. Tran experienced the amazing healing benefits of Falun Dafa just as many Falun Dafa practitioners did when they started to practice Falun Dafa and experienced no more illnesses. 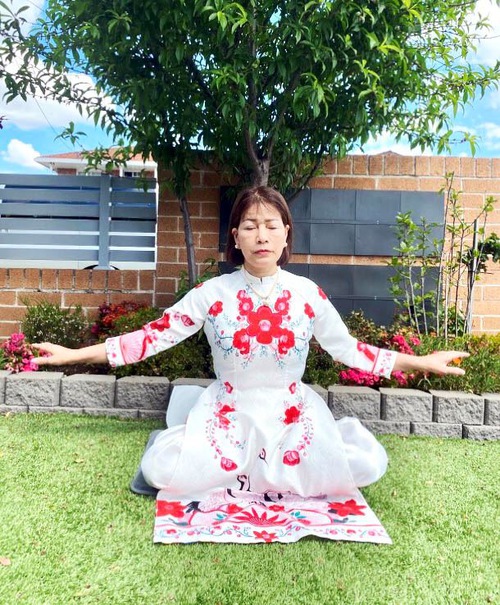 “One week after I started reading the Falun Dafa books,” said Ms. Tram, “when I was practicing the third exercise, I saw a bright flash of light. Then, three flowers blossomed in my forehead. I remembered what Master said about the third eye in Zhuan Falun. I didn’t think much it. I started to read Zhuan Falun from Lecture One to Lecture Nine after I woke up early in the morning. When I read Lecture Five, my eyes hurt and then I couldn’t see the words in the book. I put cold towels over my eyes to ease the pain. I continued reading until the evening. When I read Lecture Nine, I saw that the words in the book were purple and glittered. I felt much better the next day. I decided to read Zhuan Falun again a week later.

“I read from Lecture One through Lecture Nine. My eyes were no longer painful. I saw every word in the book had a golden ring. I could feel a Falun spinning in my left eye and sometimes in my right eye as well.

“I knew that Master was purifying my body. When I was practicing the fifth exercise, I felt a powerful energy current being pushed from my lower abdomen to my leg. I listened to the exercise music and felt wonderful – just like I was sitting inside an eggshell. When I was listening to the music of the 5th set of the exercises, I felt the bad substances in my head were removed. It was amazing.

“Since I started reading Zhuan Falun, I felt that Master was lecturing to me after I went to sleep. Sometimes I could see Falun spinning in front of my eyes. Then, the book Zhuan Falun appeared before me. I would get up then and started to read the Fa. Master’s Fa is always in my heart. I get up at 4 a.m. and do the exercises beginning at 4:30 a.m. After the exercises, I study the Fa and memorize it. I feel wonderful when I memorize the Fa. When my mind starts wandering, I will read that paragraph a few times. My mind then becomes focused.”

The Chinese Communist Party (CCP) slanders and persecutes Falun Dafa in China. It also bought off many media worldwide to make sure people will hear its lies. Many people misunderstand Falun Dafa. Huyen’s children were affected as well.

“My children supported me when I started to practice Falun Dafa,” Huyen said, “They knew that it was good for healing and keeping fit, as all my illnesses disappeared and I feel very good. I said to them that Falun Dafa is very effective in healing. Their attitude changed somehow. They said that I must be rational and not go astray. I understood them, as they believed in taking medicine was the normal thing to do throughout life.”

She knew that it was a test. When they searched on the Internet for Falun Dafa’s information, her children came across the lies published by the CCP. She said to them: ‘Have you read Dafa books? I have read many. The books teach people how to be good, and not a single bad word can be found. Do you see that I did anything bad after I began to practice Falun Dafa?’”

She knew that it tested how determined she was concerning Falun Dafa. Everything in her daily life was a test of her xinxing. Although she had practiced Falun Dafa for a short time, she firmly believes in the principles Master taught in Zhuan Falun.

The CCP virus spread to the world. Many people worry about their health. She often went out to distribute truth-clarifying materials and help people learn the facts about Falun Dafa. She hopes that more people can gain mental and physical health like herself.

“I hope that more people come to learn the truth about Falun Dafa. Falun Dafa is a good practice. People benefit mentally and physically after they have learned it. I had the terrible experience of suffering from illnesses. I hope more people will gain good health, just like myself.”

“Falun Dafa is always in my mind.” She said, “The first thing I do every morning is to do the exercises. Then, I study the Fa. I feel light with no illness and I feel happy. Looking back, six months ago I was filled with anxiety and bitterness. I was tortured by my illnesses and hoped to die. I changed completely after I practiced Falun Dafa for only several months. I am illness-free. I live a peaceful and happy life now.

I thank Master from the bottom of my heart for being reborn. Cultivation in Falun Dafa is the most meaningful and precious thing I have ever done in my life. My fellow practitioners and I are the luckiest people in the world, because we are Master’s disciples.”

“An Understanding of the Fa: Having a Passive or Proactive Attitude”