A Practitioner from Bavaria, Germany, Thanks Master Li: “Dafa Gave Me Hope!”

(Minghui.org) “Master gave me the opportunity to practice and gave me hope in this life.” Business owner Fred Wollner recalled his cultivation journey as he participated in a truth clarification activity in Munich's Pasing train station on December 29, 2020. He said he is deeply grateful to Master. His wife and several relatives have also begun practicing Falun Dafa after witnessing his positive changes. 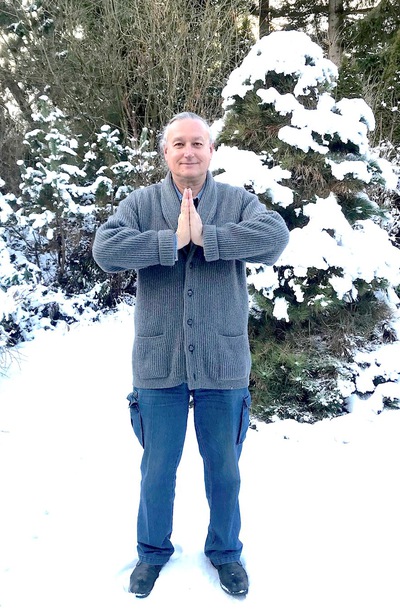 “Master guides us with wisdom and he knows what is right. Especially in this very special period when he enlightens us, I am always very happy,” said Fred. “Whenever I’ve encountered difficulties during my cultivation over the past nearly 20 years, I can always feel that Master is guiding me.”

Always very interested in Asian culture and cultivation, Fred had been searching for a spiritual path. He studied Zen Buddhism, but gave it up, “Because I realized that it had come to an end. I was disappointed and didn’t believe that I could find a real path in this life. Everything is so superficial.”

One day about 20 years ago, Fred was browsing through books on spirituality in a bookstore in Stuttgart. As soon as he picked up a book on Falun Dafa, he sensed that it was “very reliable.” He bought it, sat down in a nearby coffee shop, and started to read.

“As soon as I read the first page, I felt that Master was talking to me,” he said. “This book spoke into my heart, and I asked myself, ‘Could I follow it?’ I answered in my heart, ‘Yes!’” When he returned to the hotel, he immediately started to learn the exercises following the book. He said, “All the exercises in practices that I learned before teach people how to fight; Falun Dafa does not. I knew right away that this was what I was looking for!”

Fred immediately felt the difference between Falun Dafa and the things he’d studied in the past when he read Zhuan Falun for the first time. He said that it was just as Master said, “It is only discussed as theory” (Lecture Eight, Zhuan Falun) in other books.

“Master always explains step by step,” he said. “This has enabled me to understand the deeper meanings. This is one of the reasons why I am grateful to Master.” He said that he felt desperate in other practices in the past, and coming across Falun Dafa was his last chance to practice in the spiritual realm in this life. “Because of this, I am full of gratitude (to Master).

“I had not lived a meaningful life in the previous few decades and I'd always been disappointed. I'd tried many methods of cultivation, but they are all deceiving people.” He said, “Master’s Fa is the first teaching that moved me from the first second and I have been following it to cultivate to today. I’ll have been practicing Falun Dafa for 20 years on April 4, 2021.” 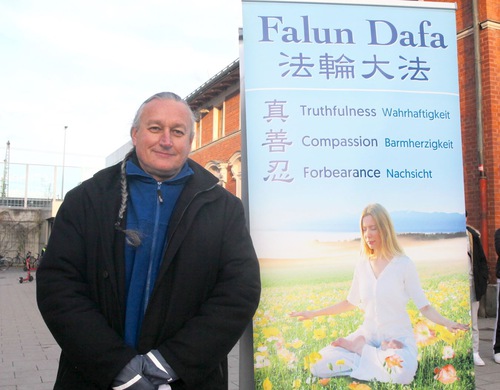 Business owner Fred Wollner has practiced Falun Dafa for nearly 20 years. He feels that practicing Dafa benefits him both physically and mentally.

“After I began practicing, my life changed a lot,” Fred said. “By reading Zhuan Falun, I understood many principles that I didn’t understand in the past.”

Fred’s wife was not happy when he first started to practice Falun Dafa, because he had tried many practices in the past with no effect. So she was quite surprised when she noticed her husband’s positive changes this time: He’d smoked for many years, but immediately quit, and he quit drinking and became healthy. She also noticed that there were fewer family conflicts, so she began to practice Falun Dafa, too. Just like her husband, she also quit drinking immediately.

Fred practiced Falun Dafa according to Truthfulness-Compassion-Forbearance. He let go of bad habits and his health and temper improved. “I’ve changed a lot. I used to be short-tempered. As a business owner, I always wanted my employees to listen to me. After practicing Falun Dafa, I became kind and peaceful. I now understand how I should handle conflicts. I am very grateful to Master for this. I feel that he is always guiding us no matter what happens.”

His relatives also noticed his improvements. His two daughters, son, and a son-in-law have also begun practicing Falun Dafa.

Fred feels very fortunate to have encountered Dafa in this lifetime. He lived in China for two and a half years. He felt that, although Chinese people are deeply poisoned by the atheism that the Chinese Communist Party promotes, they still have a desire for faith and traditional culture deep in their hearts. He believes that Falun Dafa is undoubtedly the best way for Chinese people to return to traditional culture.