(Minghui.org) Today's news from China includes incidents of persecution that took place in 7 cities or counties in 5 provinces, where at least 27 practitioners were recently persecuted for their belief. 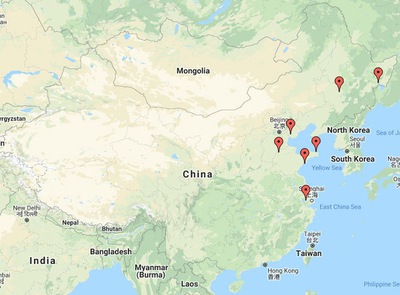 Officers from the Yonggu Police Station ransacked Ms. Shuai Yujuan’s home on December 17, 2020. After rummaging through all the cabinets, lifting off mattresses, searching all the rooms, they did not find what they were looking for.

Later, they brought Ms. Shuai and her non-practitioner husband to the police station and interrogated them separately. They took Ms. Shuai’s cell phone for inspection and testing. About an hour later, after examining her phone, they let the couple go home. Ms. Shuai did not cooperate with them and did not sign anything.

Ms. Wang Aige and Ms. Zhu Guoying, both in their 70s, from Huangdao District, were arrested and taken to the Pudong Detention Center by officers from the Dachang Town Police Station on January 5, 2021.

On November 27, 2017, both practitioners were reported to the police for talking to people about Falun Gong, and were arrested by police officers. They were released on bail.

Both were prosecuted by the Huangdao District Procuratorate on July 31, 2018.

They were tried by the Huangdao District Court on November 26, 2018. Ms. Wang was sentenced to one year in prison and fined 5,000 yuan. Since Ms. Zhu did not appear in court, the court did not announce her verdict.

After the sentence was pronounced, the police took Ms. Wang right away to the Pudong Detention Center, which refused to accept her for health reasons.

The officers took Ms. Wang and Ms. Zhu to the Haici Hospital for medical examinations and nucleic acid tests on December 15, 2020.

In late December 2020, the officers took them to quarantine in Chengyang District for 14 days.

On January 5, 2021, both practitioners were taken to the Pudong Detention Center.

Cases of 13 practitioners from Fengnan District were turned over to the Luannan Procuratorate and brought to the Luannan Court on August 12, 2020. The court has scheduled the trial on January 20 and 21, 2021.

Ms. Wang Honglian was arrested by six or seven officers, including Ni Wei from the Huangguan Police Station in the Economic and Technological Development Zone, on January 6, 2021. The officers ransacked her home and confiscated Falun Dafa books, a computer, and a printer. She was taken to the police station. She was brought home by her daughter and son-in-law at 8 p.m.

Officers from the Poyu Town Police Station, Huancui District, broke into Mr. Yu Guolong’s home in Quanyu Village and arrested him on the morning of January 6. His current whereabouts are unknown.

Ms. Yao Weimin’s case was brought to the Wujiang Court on December 14, 2020. She was arrested by officers from the Shishan Police Station on the afternoon of January 8, 2021. The court issued an arrest warrant and wanted to take her to a detention center. She firmly resisted, and finally, the judge let her go home.

Ms. Dong Deqin was arrested by officers from the Wutai Police Station on December 17, 2020. She was later released.

On December 21, several officers broke into her home and arrested her. They took her to the Dehui Hospital for a physical exam. After that, she was taken back to the police station, where the officers grabbed her fingers, tried to collect her fingerprints, and pressured her to sign paperwork. She did not cooperate. The police station director got infuriated, hit her, pulled her hair till she fell to the ground. Ms. Dong refused to give in. Later, her husband took her home.

Over a dozen officers from the Domestic Security Division and the Wenquan Police Station led by Liu Jie, head of the 610 Office, went to homes of Ms. Song Jianhua, Zhou Derong (gender unknown), and Zhao Rongxue (gender unknown) on January 8, 2021.

The officers broke the lock and door, entered Ms. Song’s home, and ransacked the place. They handcuffed her to restrain her and twisted her non-practitioner daughter’s arm to the back. They confiscated Falun Dafa books, weekly publications, paper cuts of “Blissfulness,” a printer, and a computer. Her blood pressure reached above 200, and the officers took her daughter to the police station for questioning.

The officers ransacked Ms. Sun’s workplace and home and confiscated photos of the founder of Falun Gong, Falun Dafa books, a computer, and a printer.

Ms. Sun’s employees were intimidated, and the police followed them when they went to the bathroom or dining hall. All employees’ had to turn in cell phones and they were not allowed to answer calls.

Ms. Sun’s non-practitioner sister, two male practitioners Li and Jiang, and a worker were also arrested. Their homes were ransacked. The worker was taken to the police station and was released around 8 p.m. Others are being held in the Rongcheng Detention Center.

Mr. Zhang Guogang and his 80-year-old mother were arrested by officers from the Ande Street Police Station while talking to people about Falun Gong in Dingzhuang Town, Lingcheng District, on the afternoon of January 5, 2021. His mother was released. His current whereabouts are unknown.

The police ransacked the homes of Ms. Gu Wenhua and her son on January 7. Ms. Gu left home and became displaced.

“Witness Account: Lei Ming, One of the Practitioners Who Made Truth-Clarifying TV Broadcasts Possible, Suffered Broken Bones All Over His Body Due to Torture”