(Minghui.org) This article was first published on November 2, 2014.

To incite public hatred of Falun Gong and to thereby somehow “justify” its policy of persecution in the minds of the public, the Chinese government arranged for a group of people to set themselves on fire on Tiananmen Square on January 21, 2001. The government told the public that they were Falun Gong practitioners. We refer to this as the “self-immolation hoax on Tiananmen Square”

We call it a hoax because all of the evidence suggests that it was staged by the Chinese communist regime as a propaganda stunt. And of course the Falun Gong teachings forbid suicide, as well.

The owner of a gas station in China, who is an expert in fire control, recently spoke to a Minghui correspondent and raised three questions about the incident.

The Chinese Central TV station (CCTV), which broadcast the footage of the hoax every day for several months, claimed that a policeman put out the fire on one of the victims by covering him with a fire blanket. But the blanket shown in the footage does not look like a real fire blanket.

A real fire blanket is made of asbestos. In China, only facilities, such as gas stations and combustible materials storage buildings, vehicles such as fire trucks and gasoline trucks, etc., are equipped with them. Police cars do not routinely carry them on patrol.

More importantly, asbestos blankets are usually gray and weigh over 20 pounds. The average person needs two hands to carry one. However, in the CCTV footage, the policeman easily opened up a colorful blanket with one hand. It looked like an acrylic blanket that is commonly available in China. 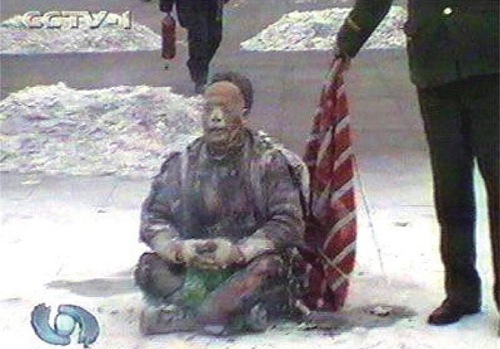 Policeman holding what is claimed to be a “fire blanket” in CCTV footage.

In the CCTV footage, the police carried a dozen fire extinguishers. All of them were 8-kilogram extinguishers. In China, however, this size extinguisher is only found in the facilities mentioned above. They are not carried in vehicles.

Different combustible materials burn differently. As an expert working in this field for more than 20 years, I have seen all kinds of materials burn, especially gasoline. The CCTV claims that those people poured gasoline on themselves, but after watching the footage many times, I've concluded that it was not a gasoline fire.

Gasoline has a special property. When it catches fire, it will spread instantly. The flames shoot up at the very beginning and then quickly die down. The whole thing is very quick, so it is not easy to capture it on film unless the camera is set up and ready to go before hand.

Yet somehow the CCTV showed very clear footage of the entire event. To my mind, there are only two possibilities that could have allowed this.

First, something other than gasoline was set on fire, so that it lasted long enough for the CCTV to take the video. Or, secondly, the TV station knew about it beforehand, so they had already set up the camera, waiting for it to happen.

Either way, the CCTV lied about it.

For more information about the staged self-immolation, click here.