A School Administrator’s Most Precious Gift

(Minghui.org) Mr. Liao Weichen was the Director of Student Affairs at a prestigious high school in Hualian, Taiwan. He had a short temper and was very hard on the students when he disciplined them, so they were afraid of him.

“I offended many students, but I didn’t think I did anything wrong. I thought strict discipline was needed. They were afraid of me and avoided me. I also had quarrels with students. When that happened, I was even tougher,” Mr. Liao said.

Due to his intense lifestyle, Mr. Liao’s health declined. The fourth year he was the student affairs director, he began to feel unwell. He tried all kinds of therapies, Western and Chinese, but nothing helped.

“A famous Chinese medicine doctor told me that I had problems with my liver,” he said. “I tried everything—qigong, mountain climbing, jogging—and took all kinds of medicines, but my health kept declining.”

Mr. Liao believed that his physical issues were due to pressure at work. “My urinary system, heart and circulatory system, nervous system, and digestive system were all messed up. It seemed there was something wrong with my liver, gallbladder, intestines, and stomach. I had chest pains as soon as I got up in the morning. My breath smelled bad. I had constant diarrhea, and I could not empty my bladder. I had to wear an adult diaper. It felt like my life was ruined. I was scared—what was wrong with me?”

Mr. Liao’s sister was troubled by his condition, so she introduced him to Dr. Hu Naiwen, a well-known Chinese medicine doctor in Taipei.

“He explained what 'loss and gain' really means, how karma is transformed, and the meaning of cultivation practice. He also suggested I look at the Falun Dafa website and told me about the nine-day free workshop. But at that time I was not interested.

Liao Weichen continued to see Dr. Hu every week. “Dr. Hu was very encouraging and asked if I felt any better. He also asked if I’d tried practicing Falun Dafa yet. He urged me to do all five exercises and asked if I’d read Zhuan Falun.”

Mr. Liao kept thinking about Dr. Hu’s words. Finally, he looked online and read the information about Falun Dafa. “I told myself, ‘Since medicines haven’t help, I should set aside all my concerns and start practicing Falun Dafa.’”

Mr. Liao read Zhuan Falun and did the exercises whenever he had time. He focused on cultivation. He even forgot that he had severe health problems. One day, he threw away all his medications.

He had an amazing experience. He took the train from Hualian to Taipei to visit his sister. During the three-hour trip, he concentrated on reading Zhuan Falun.

“When the train reached Taipei, I picked up my luggage and ran outside,” he said. “My body felt light, as if I were weightless. I walked briskly all the way to my sister’s apartment building and up to the fourth floor without stopping. When I knocked on her door, my body still felt light. I didn’t feel tired. I was amazed—what had just happened?”

Mr. Liao became very active. “I began getting up at 3 a.m. to do the exercises. On the way to my office I would memorize Zhuan Falun.” Two months later he suddenly realized that all his illness symptoms had disappeared. 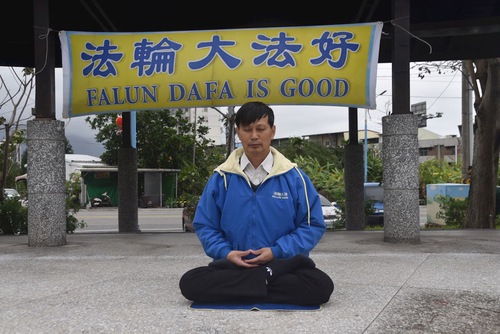 Mr. Liao does the fifth exercise, the sitting meditation.

When Mr. Liao looked back at his life, he realized that he’d made many mistakes.

“I had a very bad temper. My own children were afraid of me. When they heard me coming in the door, they hid upstairs. I spanked all of them. I smashed many things, such as the TV remote control, bottles, and cell phones. My son told me that he and his brother planned to hang me up and beat me when they grew up.

“But now my kids see me as a role model. They often buy me presents and treat me to dinner. My family has become harmonious.”

There were positive changes at work. The hostile student affairs director who’d been so tough and cruel was no longer. “When former students saw me, they were surprised—I was so kind and sincere. The teachers asked me what had happened to me.” Mr. Liao smiled and told everyone, “I started to practice Falun Dafa.”

One year, he had a tough task: He was assigned to a class of students that were hard to discipline. The students knew he was strict, so they protested. “We don’t want him!” they shouted to the other teachers. The entire class went to the principal’s office to appeal. Their parents were also against Mr. Liao.

The students made trouble on purpose: many of them skipped class, refused to clean the classroom, and made noise during lectures. Sometimes Mr. Liao had to go to the police station in the middle of the night to bail out his students. No matter what happened, Mr. Liao remained compassionate. He told himself that he had to let the students and parents know what kind of person he was by what he said and did.

“Even though they were young, this group of students had already had difficulties with school. Their previous teachers had never acknowledged or praised them. I told myself to find their good points and highlight them. I visited each family and told the parents how good their kids were. I listened to these students and explained the principles of being good people and how to be tolerant.”

Gradually, the students’ attitudes started to change. They approached Mr. Liao as a friend. They also started to restrain themselves. The whole class was united through the power of Truthfulness-Compassion-Forbearance, the guiding principles of Falun Dafa.

When the classes were asked to design their “class flags,” Mr. Liao’s students decided to put the words “Falun Dafa, Truthfulness-Compassion-Forbearance” on their flag, because they felt that this represented the spirit of their class.

Looking Within During Conflicts

On May 13, 2013, Mr. Liao was appointed principal of the school. That day happened to be World Falun Dafa Day. When a journalist interviewed him, he said that he achieved this because he conducted himself according to Falun Dafa's principles. He also explained what Falun Dafa was. The following day, the local newspaper published a feature article titled: “Liao Weichen Cultivates Falun Dafa, and Believes in Truthfulness-Compassion-Forbearance.”

As the principal, Mr. Liao was routinely criticized, verbally attacked, and even slandered. He never complained or tried to get revenge. One day, the president of the school board said to him, “You are really a good person.” He said this twice.

Mr. Liao said, “No matter how others treat me, I look inward to see if I have any problems. When a cultivator runs into conflicts, the most important thing is to first examine himself, no matter whose fault it is. If one can look inward during conflicts, then everything is a cultivation opportunity.”

After working as an educator for 34 years, Mr. Liao retired and joined NTDTV. He helps the TV station promote its programs. He has introduced NTDTV to government officials and over 40 elementary schools. He organized five training workshops for teachers and 22 activities at elementary schools with the goal of improving students’ moral standards. He also obtained permissions and screened NTDTV programs at schools.

During a “Teachers Day” event, which was attended by county government officials, representatives from the central and local agents, and 20 associations, Mr. Liao talked about the Chinese Communist Party’s persecution of Falun Dafa and explained in detail the state-sanctioned organ harvesting from living practitioners in China. He hopes to help the TV station convey positive energy and the truth to the world and wake up more people. 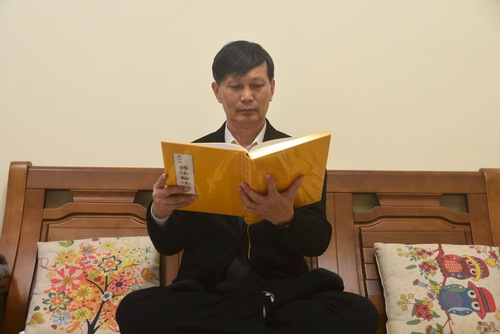 Mr. Liao reads a Falun Dafa book, which he says is the most precious treasure in his life.

Mr. Liao feels that it's not easy to obtain a righteous cultivation way. He said, “Dafa is my wealth—a most precious gift. I have the most precious treasure in the world. I can put down pursuing fame and money. From the bottom of my heart, I deeply appreciate Master Li Hongzhi for renewing my life. I hope that more people will learn the truth of Falun Dafa and find direction in their lives.”