(Minghui.org) Falun Gong practitioners staged a rally in Philadelphia's Chinatown on August 30, 2020, to oppose the ongoing persecution of Falun Gong in China. Dozens of practitioners held banners and posters, and several practitioners gave speeches to draw attention to the Chinese Communist Party's (CCP) atrocities committed against peaceful citizens who strive to live according to Truthfulness-Compassion-Forbearance.

Upon hearing how the CCP has harmed a large number of Chinese citizens over its 70-year history, including the brutal persecution of Falun Gong practitioners, nearly 90 passersby signed a petition calling for an end to the regime. More than 10 Chinese people agreed to quit the CCP organizations that they had joined in China.

As of the end of August, 363 million Chinese have publicly separated themselves from the Chinese Communist Party and its affiliated youth organizations, the Communist Youth League and Young Pioneers. 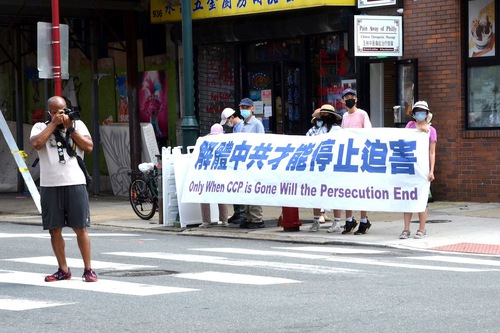 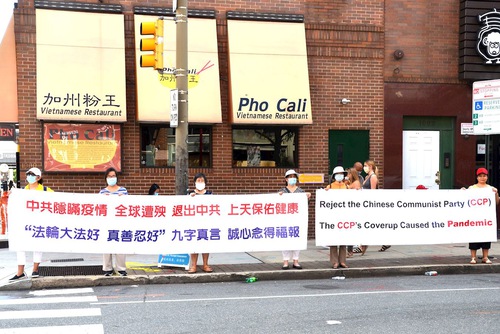 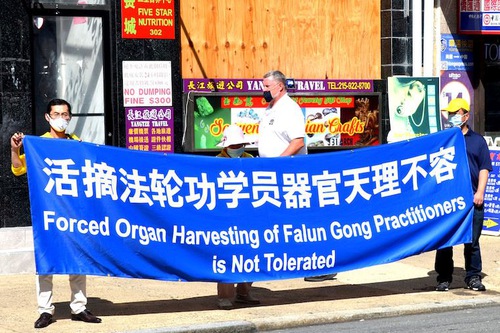 Proclamation from State Representative: Breaking Away from the CCP

Mary Isaacson, a member of the Pennsylvania House of Representatives, issued a proclamation for the event. The proclamation pointed out that the August 30 activity aims to support the 16-year-long peaceful “Quitting the CCP” movement, which was inspired by the Epoch Times’ newspaper publication of the Nine Commentaries on the Communist Party in 2004. 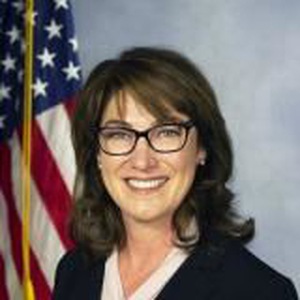 Mary Isaacson from the Pennsylvania House of Representatives issued a proclamation for the rally.

“The Quitting the CCP movement has allowed Chinese people around the globe to break free from the CCP’s state-wide propaganda, and over 70 years of suppressive campaigns, which have deprived the Chinese people of their spiritual heritage and basic human rights afforded by their own constitution.

“The CCP has killed over 80 million of its own citizens through numerous political campaigns in the last 70 years, including several land reforms, the Great Leap Forward, the Cultural Revolution, the Tiananmen Square Massacre, the persecution of Falun Gong, suppression of Uighurs, and retaliation for recent protests in Hong Kong.”

The proclamation mentioned that Falun Gong practitioners are the largest group of persecuted people in China. They have been illegally imprisoned and viciously tortured for the last 21 years. “Many have been killed through the government’s program of forced organ harvesting... Furthermore, the CCP uses its propaganda channels to promote its ideology around the world to sow discord and cover up its own crimes. Most recently, the Chinese Communist Party’s coverup contributed to a pandemic that now threatens the lives of people around the globe.”

Aaron Bashir, a Republican nominee for State Representative for District 172, also wrote a letter in support of the event. “I welcome all those millions and millions of Chinese brothers and sisters who have decided to leave the Communist Party... The Communist Party does not speak for all the people of China,” he wrote. “I strongly condemn all the tortures, brutality, camps, and human rights violations by the Communist Party of China.” 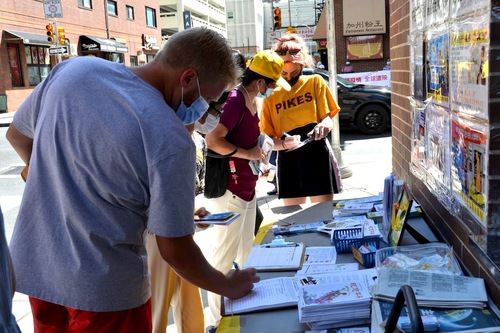 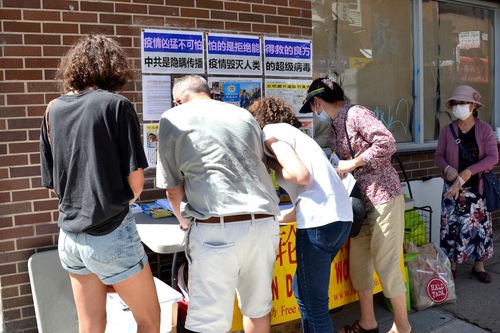 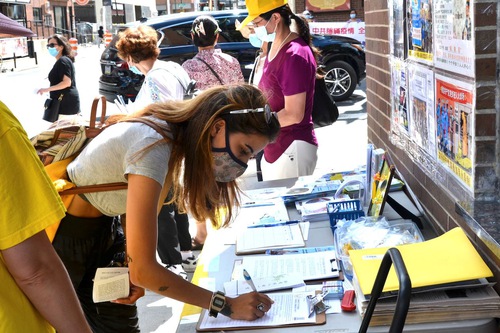 Passersby sign a petition to condemn the persecution of Falun Gong and reject the CCP.

Freelance photographer Davis signed the petition to reject the CCP. “I oppose the CCP’s persecution of Chinese people and its spreading of the coronavirus to the entire world,” he remarked. He said that the CCP's cover-up of the coronavirus led to the global pandemic and he believes that everyone should be clear on this and hold the CCP accountable.

Zoe, an instructor at a martial arts school in Philadelphia, said she had heard about the crimes committed by the CCP from her Chinese coworker. After hearing that Falun Gong practitioners had been resisting the 21-year-long persecution in China to safeguard their belief, she was very touched. “That is great and please keep it up,” she said. “As long as you do not give up, communism will be eradicated.” 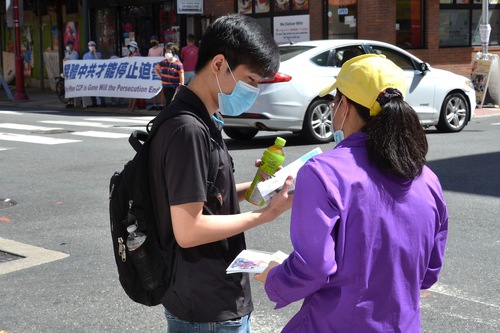 Talking to a pedestrian about Falun Gong and the persecution in China.

“Canada: Car Parade in Calgary Calls for Chinese to Cast Away CCP”