(Minghui.org) Falun Dafa practitioners in Germany held an Information Day near Stuttgart's train station on September 19, 2020. They told people about the Chinese Communist Party’s (CCP) persecution of practitioners and collected signatures on a petition calling for an end to the CCP’s atrocity of organ harvesting from living practitioners. 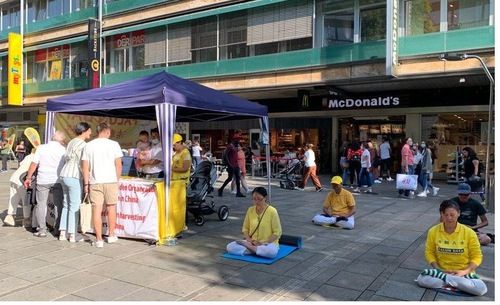 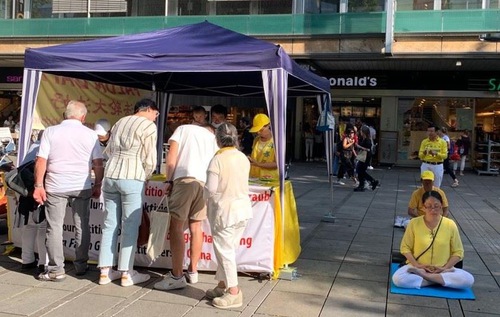 Two police officers stopped by the booth and told practitioners, “If any CCP employee takes pictures of you or makes trouble, please call 110. If any passerby interferes, you can also contact us. We’ll be here right away.” The officers indicated that they were aware of the CCP’s agents in Germany.

A young couple approached the booth. The young man said that he had heard about Falun Dafa (also known as Falun Gong), but didn’t know why the CCP persecuted it. A practitioner explained that because the CCP could not control Falun Dafa, the totalitarian regime persecuted citizens who follow Truthfulness-Compassion-Forbearance. The young woman was saddened to hear about the CCP’s crime of organ harvesting. Both of them signed the petition and said they hope the persecution ends soon.

When a young Chinese man stopped to watch the practitioners’ exercise demonstration, a practitioner asked if he had quit the Communist organizations. The young man agreed to quit the Youth League, which he had joined in China. The young man’s wife joined their conversation and took informational flyers to read.

A woman from Taiwan told a practitioner that she knew a lot about the persecution. She signed the petition and thanked the practitioners for their great work, which she would like to continue supporting.

According to practitioner Ms. Liu, many copies of their Chinese newsletter were distributed. She said an increasing number of Chinese people are now taking information about Falun Dafa and how to quit the CCP.

“San Francisco: Rally in front of Chinese Consulate Calls for an End to the Persecution and Exposes Recent Escalation”