(Minghui.org) Today's news from China includes incidents of persecution that took place in 20 cities or counties in 11 provinces, where at least 44 practitioners were recently persecuted for their belief. 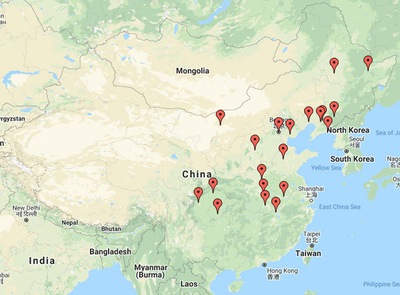 Mr. Zhao Delin, in his 70s, in Baita District, passed away on November 9, 2019. He had been arrested twice. He was exhausted physically and mentally after years of persecution.

He was arrested and sentenced to seven years in prison in 2002. He was held in the Panjin Prison. After returning home in 2009, he remained in poor health. He was arrested again in 2012, and was released on bail for health reasons.

When he was unable to take care of himself and could not even talk, the authorities continued to send people to harass him. In the end, he was so terrified of the police that he trembled whenever he saw them. His health kept getting worse and worse.

Four people came to his home again in November 2019. They said they wanted to come and have a look, and it was at the order of higher officials.

Within a few days, he developed a fever and was taken to the hospital. He passed away around 5 a.m. the following morning.

She was forcibly carried into the car by four people. At that time, there were over 10 people blocking every exit around her house, in the front and from behind, and a SWAT team vehicle was also on the scene.

Seven officers from the Shahe Police Station, Changping District broke into Mr. Wang Hongbin’s home on August 28, 2020. They confiscated a computer, several cards, and an electric bicycle. Mr. Wang was taken to the police station. He is being held in the Changping District Detention Center.

Ms. Cai Yan, 34, was followed and arrested when she distributed Falun Gong materials around August 25, 2020. Her home was ransacked and a printer a computer were confiscated. She is being held in the Chaoyang District Detention Center.

Ms. Sun Min was an excellent teacher. During the CCP’s persecution of Falun Gong, she was subjected to arrest, and brainwashing. She was incarcerated in a forced labor camp, and sentenced to prison.

When she was arrested in June 2016, she suffered various inhuman tortures, and was sentenced to seven years in prison. She was transferred from the Anshan City Women's Detention Center to the Liaoning Province Women's Prison on October 10, 2017. She passed away on March 8, 2018. She was only 50 years old.

She was tortured in various ways. She went on a hunger strike and was taken to a hospital. After returning from the hospital, she was locked in a separate room with the window open. It was in winter. The lowest temperature in Shenyang in winter is -10 or -20 degrees Fahrenheit. At that time, she was extremely weak. When she was sent to the hospital again, she was already on the verge of death. In the end she froze to death.

Ms. Dong Yuhuan, 68, and Ms. Lu Xiaoping, 74, were arrested and taken to the Taiping Police Station when they talked to people about Falun Gong on the morning of August 26, 2020.

Both practitioners were held in the police station for nearly 15 hours. They were interrogated and threatened. They were not released until around midnight after enduring extensive mental abuse.

Yu Shiping, who is responsible for monitoring Internet content at the Yama Residential Community in Yunhuan Neighborhood Administration Office, and other people went to Ms. Li Guoying’s home on the morning of June 11, 2020.

They asked her about other Falun Gong practitioners and said that the higher authorities would send someone to conduct a search. If Falun Gong materials were found, she could be sentenced to prison. The lenient punishment would result in the suspension of salary and adversely impacting her children’s enrolling in schools or joining the People’s Liberation Army. That afternoon Yu came to Ms. Li’s home again with a list. He said it was the order from the higher authorities.

Yu went to Ms. Fan Shujuan’s home on June 29 and told her to fill out a form. Ms. Fan refused, instead she told him the facts about the persecution of Falun Gong.

Ms. Dong Xueyan received harassing phone calls from a residential police officer at the Changqing Police Station five times between June and July 2020. She was asked if she was still practiced Falun Gong. After Ms. Dong refused to cooperate, they lied several times and threatened that her family would be implicated in their insurance coverage of “serious illnesses.”

Ms. Zhai was arrested in Beijing. Her case was brought to the Chaoyang District Court on February 11, 2020.

Ms. Li Chunfu and Ms. Liu Shaoxiu were harassed by Tian Wenjie, Party secretary of the Douhe New Village, No. 5 Farm, Caofeidian District, in early July 2020. They were asked to sign paperwork to give up practicing Falun Gong, but they refused.

Tian has now begun harassing practitioners’ family members who do not practice. Ms. Liu Lirong and Ms. Zhao Shuhua’s non-practitioner husbands were harassed in recent days. When Tian demanded that they sign paperwork for their wives, they refused.

Ms. Liu Shaoxiu’s husband Ms. Li Wenyi passed away due to persecution. Her daughter Ms. Li Na suffered from a mental collapse as a result of the escalated persecution as she remained firm in her belief. When she passed away in 2015 she was only 36 years old.

Tian wanted to send Ms. Liu to a nursing home. His intention was to separate her from Falun Gong practitioners so she would give up practicing.

Huanggezhuang Town government personnel in Fengnan District went to Ms. Wang Huilin’s home and harassed her on September 1, 2020. They tried to force her to sign the three statements, which she refused.

Mr. Liu Wansheng’s family members were notified in recent days that Mr. Liu would be tried at the Linghai Court on the morning of September 4, 2020.

Ms. Han Yufeng is being held in the Xinbin County Detention Center.

Ms. Pan Yuhuan and Ms. Zhang Xinfang in Jian’an District were arrested on August 22, 2020. It was reported that they are being held in the Xuchang City Detention Center.

Ms. Wang Ziying from Songzhuangzi Village, Chahe Town, Fengnan District, was arrested on August 12, 2020. Her home was ransacked. She was given 15 days of detention, to be served outside a detention center.

Six people including officers from the Fanjiang Road Police Station broke into 80-year-old Ms. Chen Guifen’s rented home and ransacked the place on August 14, 2020. Ms. Chen held Zhuan Falun tightly to her chest, and four officers tried to grab the book and take it from her.

Ms. Kang Qihui in Feidong County was arrested on April 23, 2020. Her case was turned over to the Shushan District Procuratorate. Li Jun, head of the Prosecution Section was put in charge of handling her case.

Mr. Lu Lifa and Mr. Wang Baozhu were arrested on August 13, 2020. They were transferred from the Fengnan District Lockup Center to the Detention Center on August 20.

Ms. Zhang Guiling was reported to the police when she distributed and posted Falun Gong materials in her village. She was arrested at home by officers from the Shuixiu Police Station. Her home was ransacked and a computer, a printer, U discs, and Falun Dafa books were confiscated. She is being held in the Jinzhong Detention Center.

Mr. Yin, Ms. Cheng, and Mr. Liu were tried on the morning of September 1, 2020. Falun Gong practitioners were not allowed to attend any part of the show trial.

Ms. Che was held in the Zhonggong Detention Center. Her trial at the Jinan Court was postponed to the morning of September 8, 2020.

They told him not to organize people to practice Falun Gang at home, and not to go outside to promote Falun Gong, among other prohibitions.

On the same day, these people went to the supermarket owned by Ms. Ji Wenqiong’s son to harass her. They told her not to go outside to distribute Falun Gong materials. They also threatened that surveillance cameras were everywhere on the street now, and how severe the consequences would be if she was seen on surveillance cameras.

Ms. Wang Huitao and her family member Mr. Liu Yongcheng from Delingshan Town, Urad Middle Banner, were tried at the No. 1 Criminal Hall of Wuyuan County Court on August 27, August 28, August 31, and September 1, 2020. No verdicts were announced.

Officers from the Zhaoyuan County Domestic Security Division led by the director and other officers from the Erzhan Town Police Station went to Mr. Sun Qing’s home and harassed him on September 2, 2020.

They confiscated photos of the founder of Falun Gong, an MP3 player, and a weekly publication. Mr. Sun was taken to the county police department, where he was asked about the source of Falun Gong materials. He was told to sign paperwork, and was released after 9 p.m. that evening.

Ms. Xiong Lihua, a teacher, was reported to the police by a student after she gave the student information about Falun Gong. She was arrested on September 2, 2020. Her home was ransacked, and U discs and photos of the founder of Falun Gong were confiscated. She was detained for 15 days.

Lu Bo, deputy chief of the Jiulongpo District Police Department, and other officers went to Ms. Zhang Quancui’s new home in the Mawangping area, Lijiatuo Sub-district, had harassed her on August 31, 2020.

The officers videotaped the new address number. Using their cell phones, they took photos of her home with the door open. They also took notes. They also looked around the house for her husband Mr. Lin Decai. He has been displaced for an extended period of time as a result of persecution.