(Minghui.org) Falun Dafa practitioners in Berlin held an event at the Brandenburg Gate on August 29-30, 2020, to tell people about Falun Dafa and how the mind and body practice has been persecuted by the Chinese Communist Party (CCP) since July 1999. 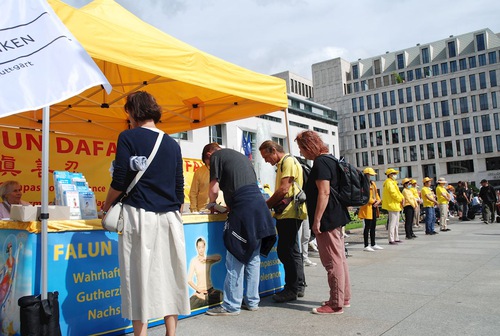 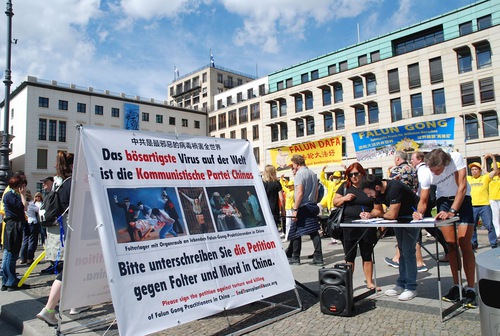 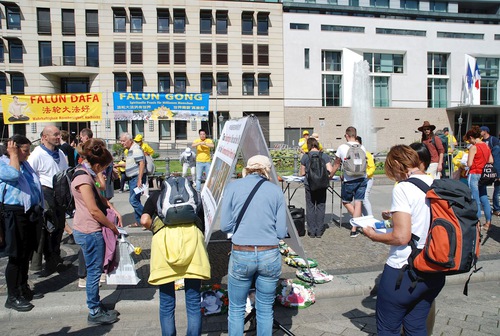 Practitioners in Berlin held an event at the Brandenburg Gate.

Moved by the peaceful, gentle exercises, many people were shocked to hear about the severe persecution in China. A woman in her 70s came from a small town in southern Germany, and this was the first time she visited Berlin. After reading the information on the banners that illustrate torture methods that practitioners suffer for their belief in China, including forced organ harvesting, she wept and said, “How on earth can this kind of thing happen?”

She immediately signed a petition which calls for the persecution to end.

“A Battle Between Good and Evil”

Sybille said she had heard about the human rights violations in China. “Everyone should sign a petition to condemn the CCP's brutality,” she said.

The damage is not limited to the Chinese people. Evidence suggests that the CCP covered up the coronavirus outbreak and thus harmed the entire world. “Sadly many European officials have been influenced by communism, both ideologically and politically,” Sybille said.

Since China’s foreign minister was scheduled to visit Germany soon, Sybille hopes the German government will raise the issue and ask the CCP to pay for losses that Germany has suffered during the pandemic. “After all, this is a battle between good and evil—and we absolutely cannot give in! We have to make this request and safeguard our rights and urge the CCP to obey the human rights convention,” she said.

Silke said she previously read some interviews and was aware of the CCP's suppression of various beliefs, including Falun Dafa. “What I have seen and read here is so shocking that I have goosebumps all over. It is so horrible that it is beyond imagination—and people are mistreated like animals,” she said, “I hope my signature can help bring this tragedy to an end. I also hope the news media in Germany will publish articles on this important matter since many people still know nothing about it.”

A young mother came with her son and signed the petition. Growing up in East Germany, she said that she knows very well how the communist party lies to people. She said the world needs to hold the CCP accountable for the pandemic. “The CCP officials knew early on that human-to-human transmission had already happened, but they chose to deceive the entire world. We cannot allow such tragedies to continue,” she said. 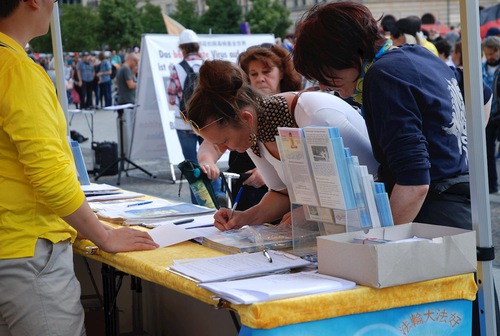 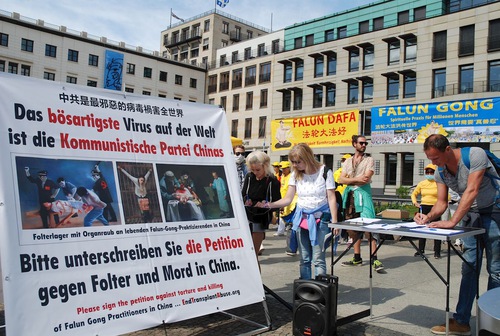 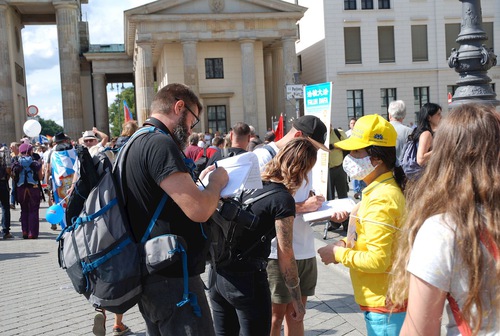 Passersby sign a petition which calls for an end to the brutality in China.

Anja came from Wiesbaden, a city in western Germany six hours from Berlin. She said she signed the petition to support practitioners’ efforts and to uphold their dignity and freedom. “I cannot imagine that human organs could be stolen and sold for profit. It is too disgusting and I cannot think of any words to describe it. We must stop this,” she said.

She feels this highlights how much Chinese people are suffering under the CCP’s rule. With surveillance and censorship everywhere, people could lose their jobs or even everything instantly just for having independent thoughts. As a result, few people care about the well being of others. “I believe joint efforts from Western society could change China. The day will come that people will awaken, real changes will occur, and Chinese people will regain their freedom,” she added.

Maria is from Austria and she came to the booth with her friend Selina. Maria said human rights issues cannot be ignored. Falun Dafa practitioners are good people and no one should harm them. Selina agreed and said she hopes more people will step forward to criticize the persecution in China. “I heard about the organ harvesting last year and have watched several documentaries on it,” she continued, “every country, including Germany, needs to condemn these crimes.”

Three women said that they had previously read about the persecution in China and wanted to know more. They chatted with a practitioner, who explained how the CCP uses violence and lies and mistreats Chinese people during its numerous political movements. She pointed out that now the entire world is suffering because the CCP covered up the coronavirus outbreak. “The CCP has been lying to the world,” she said.

When they heard that the practitioner was unable to visit China for over 20 years because of her spiritual belief, the women said they were sad. “I want to cry, because the persecution is so harsh,” one of them said. “I cannot find the right words to express my sadness.”

Stefan and Anna are from Saxony, a city in eastern Germany. Stefan suffered from a disease of the nervous system and doctors said there is no cure for it. While learning the first two sets of movements, he said he felt very relaxed and could feel the energy circulating inside his body. Anna said she also felt energized and both of them took information about Falun Dafa before they left.

Marie said she heard about Falun Dafa before, but she was curious to know more, especially about the persecution in China. Drawn by the serene environment of the practitioners’ group exercises on August 29, she returned the following day.

Hearing about the forced organ harvesting for the first time, she felt it is terribly wrong and said, “There are some bad things in this world that aim to destroy us and we cannot let that happen. What comes around goes around. People are repaid for any bad things that they do.”

“Former Teacher Dies After Suffering Decades of Persecution for His Faith”