(Minghui.org) Falun Dafa, also know as Falun Gong, is a spiritual practice rooted in Buddhist tradition and based on the principles of Truthfulness, Compassion, and Forbearance. Throughout the 1990s, it was widely popular in China. However, the Chinese Communist Party launched a massive campaign of suppression on July 20, 1999, to eradicate Falun Gong. This campaign continues today and has resulted in many practitioners being imprisoned and tortured for their faith. At least thousands have been confirmed to have died as a result of such torture.

A report by the United Nations Special Rapporteur on Torture indicated in 2006 that two-thirds of torture cases listed for China were for Falun Gong practitioners. Both physical and mental torture techniques are used in the authorities’ attempts to force practitioners to renounce their faith during the so-called “transformation” process. Lower-level officials are encouraged to increase their efficiency at transformation through quotas and offering rewards such as a promotions and bonuses to police officers and prison guards.

As of July 10, 2019, Minghui.org had confirmed that at least 86,050 practitioners had been arrested at one point or another; 28,143 had spent time in labor camps; 17,963 had been sentenced to prison; 18,838 had been taken to brainwashing centers; and 809 had been confined in mental hospitals. It has also documented 519,040 cases of torture. Untold numbers have suffered discrimination, termination of employment, loss of income, mental trauma, broken families, injury, disability, and death over the past two decades of persecution.

The following is a small sample of torture methods used by Chinese authorities on Falun Gong practitioners.

Mr. Ji Guangjui, an engineer in Hefei City, Anhui Province, was arrested on March 28, 2017. He was taken to a local police station, where he was severely tortured during an interrogation. Officers jammed bamboo sticks under his fingernails, struck him on the head and chest, and put him in a chokehold. He is currently serving a 4-year prison term for refusing to renounce Falun Gong.

His brother Mr. Ji Guangjie and his sister Ms. Ji Guangxiong, both of whom also practice Falun Gong, were detained and imprisoned multiple times for their faith. Both passed away in 2012 after suffering years of persecution. 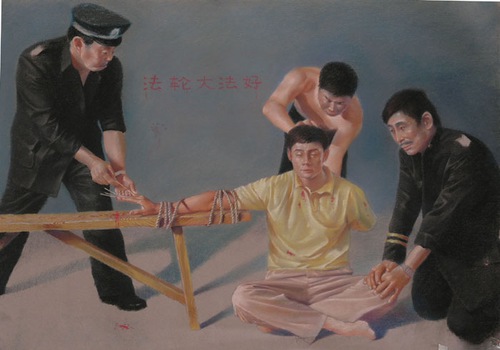 Falun Gong practitioners imprisoned in Gongzhuling Prison in Jilin Province were subjected to electric shocks and tied up as a form of torture. The guards usually use electric batons to shock newly admitted practitioners first. When that fails to shake their faith, the guards tie them up in an excruciating position that often causes permanent damage.

This method causes breathing difficulties, and the guards untie the practitioners only during meal times and restroom breaks. Some practitioners were tied up like this for up to nine months.

Ms. Miao Xiaolu, a Qiqihar City, Heilongjiang Province resident, was arrested and sentenced to five years in Heilongjiang Women's Prison, where she was subjected to forced feeding, beating, freezing, and many other types of physical abuse.

One day in July 2004, she was handcuffed with her hands behind her back and hung up with only her toes touching the floor. Her arms became numb and she lost consciousness. As the guards put her down, the handcuffs had cut into her flesh, causing her wrists to bleed. The torture led to incontinence, and her lower body was soaked with urine.

Ms. Miao became incapacitated due to torture, but she wasn't released on medical parole until November 2006, barely a month before her term was set to expire. Her health continued to deteriorate after she returned home, and she died in March 2008 at the age of 43.

Sitting on a small stool is a widely used torture method against Falun Gong practitioners in prisons. This seemingly harmless punishment is in fact extremely painful. Prolonged sitting in a fixed position often results in festering on the buttocks and swelling of the legs and feet, sometimes leading to permanent injuries.

Ms. Lei Xiuxiang, a Jilin City, Jilin Province resident, was arrested in 2015 and sentenced to Jilin Women's Prison. In July and August 2019, Ms. Lei was forced to sit on a small stool that was only 6 inches high and had a sitting area of 7 by 9 inches. She was ordered to keep her body straight and maintain a 90-degree angle between her upper body and legs. The inmates put a piece of paper between her legs and forced her to keep her legs together. If the paper fell, the inmates would pinch or verbally abuse her. She was only allowed to use the toilet four times a day. She was not allowed to wash, bathe, or change clothes.

In addition to torture methods mentioned above, practitioners were burned with hot irons, shocked with high-voltage electric batons, and deprived of sleep, food, and use of toilets, just to name a few. Human rights workers have compiled over 100 methods of torture used against Falun Gong practitioners.

Mr. Wang Shuangmu from Jiangsu Province was arrested on October 3, 2017, for filing a criminal complaint against Jiang Zemin, former leader of the Chinese communist regime who ordered the persecution of Falun Gong in 1999. Mr. Wang was later given 1.5 years and sent to Hongzehu Prison to serve time. Guards there tried to pressure Mr. Wang to renounce his faith. When he refused, they sprayed him with water spiked with peppers, poked him with sharp pens and nails, and forced him to sit on the edge of a tiny stool for long hours each day. They also tied him up twice in a straitjacket, each time for a month.

At Moqi Detention Center of Inner Mongolia, the guards created a system to torture practitioners. For example, practitioners were shackled to a bed with metal chains, soaked with ice-cold water until the person passed out, had bamboo sticks pierced into their feet between the toes, and made to wear shackles of heavy wheels (53 lbs), etc. As a result, several practitioners died from torture directly, yet no one was held responsible for their deaths.

Jiangsu Man Tortured While Imprisoned for His Faith

“Henan Veteran Sentenced to 2.5 Years for His Faith”