Parisian: Everyone Involved in War to Defend Humanity

(Minghui.org) As summer fades into autumn, Falun Dafa practitioners in Paris gathered at the Plaza of Liberties and Human Rights on two consecutive Sunday afternoons (August 23 and 30, 2020) to demonstrate the Falun Dafa exercises and raise awareness of the persecution of the spiritual discipline in China.

The popular tourist attraction is again brimming with visitors after coronavirus scares in the city. While many people already knew about Falun Dafa, others were learning about it for the first time. When people heard that practitioners are tortured and even killed for organs in China for living by the principles of Truthfulness-Compassion-Forbearance, people wanted to sign the practitioners' petition in the hope that the Chinese Communist Party’s crimes against humanity would end sooner. 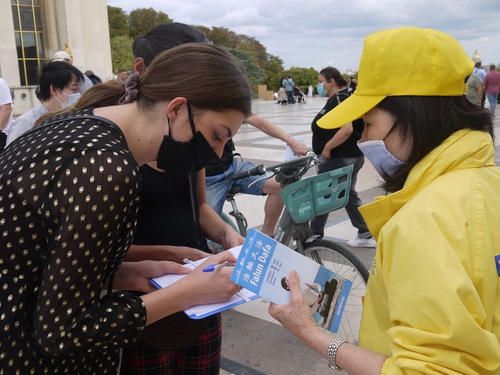 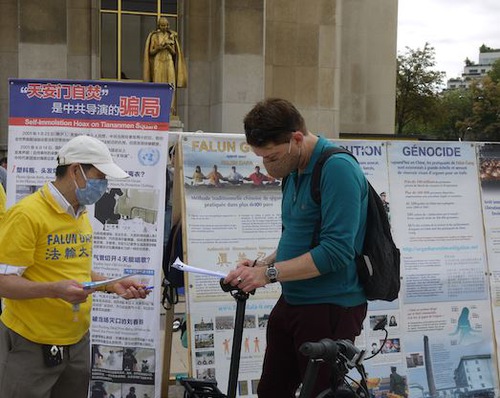 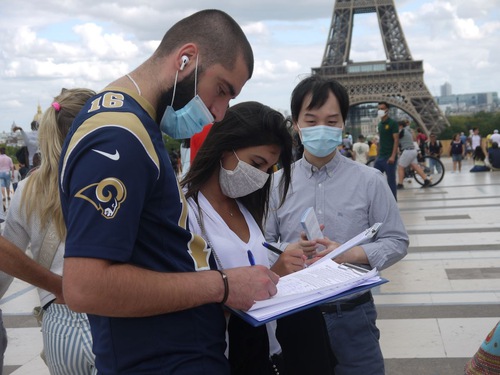 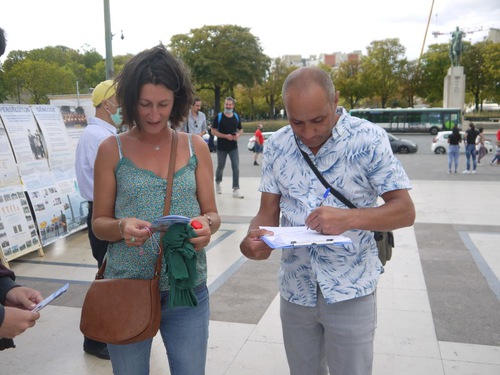 Tourists sign a petition calling for an end to the persecution of Falun Dafa. 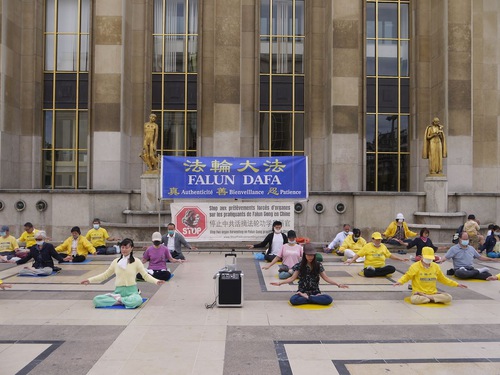 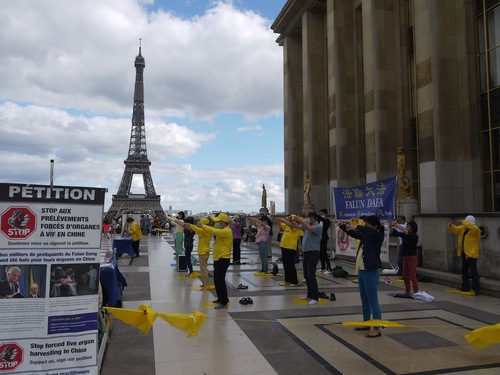 Practitioners demonstrate the Falun Dafa exercises at the Plaza of Liberties and Human Rights in Paris. 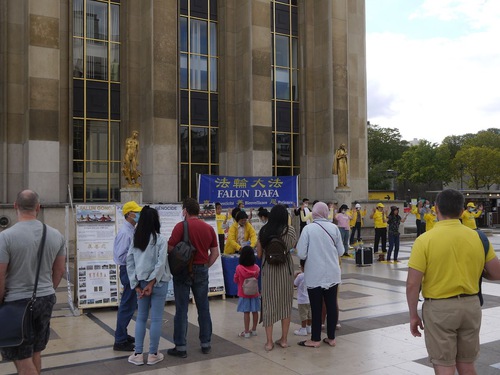 Chris, a freelance writer, asked practitioners about the situation in China. “It’s cruel to [forcibly] take someone’s organs while they’re still alive. It’s appalling. We shouldn’t doubt this is happening and must expose this,” she said. “Everyone should be free to practice cultivation. We must not let such barbaric actions continue. This is a war to defend humanity and involves every country and every person. It is a problem for the entire human race,” she said.

She said practitioners’ actions are courageous and said she hopes people of all ethnic groups will unite to stop the atrocities happening around the world.

Shaneze, a primary school teacher, was horrified by communist regimes' crimes against humanity. “Forced organ harvesting shouldn’t take place. It is inhuman. No one should be treated like that, not to mention people of faith,” she said. “Everyone must respect other people’s religious faith. No one should be incarcerated or tortured for their belief. Thank you for everything you have done.”

Mr. Klaus, a church organist in Germany, signed the petition and said, “We should speak out more and condemn such wrongdoings more sternly. It is a pity that people choose to keep quiet for economic gain.” He said Falun Gong's principles of Truthfulness-Compassion-Forbearance are universal values. He also encouraged practitioners and said that freedom will prevail one day.

Francis Korchit told a practitioner from China, “People don’t have freedom of speech in your country. Police are constantly monitoring you from behind. It is the same for us Westerners when we go there. We don’t have freedom. From the moment we step into a Chinese airport, we are under surveillance. We cannot express our opinion freely either. I hope this will change in the next few years.”

“I don’t approve of what’s happening in China. I’m sure no one would like it. I feel that the regime has put a lot of effort into misleading people on social media platforms, leading them to where they want them to go. So people shouldn't listen unquestioningly to what the media says. They should listen to you. They should find out the truth themselves.”

Bounzavsky, a consultant for hotels, said, “Forced organ harvesting is not allowed to take place in any country in this world today. We have to try our very best to tell people around us about this persecution so that [Falun Dafa] adherents can practice this freely.”

“Six Arrested for Distributing Materials about Their Faith, Five to Appear in Court, One’s Case On Hold Due to His Physical Condition”