(Minghui.org) Falun Gong practitioners held a rally and parade with the theme “Stop the Persecution, Disintegrate the CCP” on September 5, 2020. The parade passed through Toronto’s busy downtown as well as Chinatown.

The Tian Guo Marching Band and a waist drum team performed in the parade. Practitioners in one section of the procession demonstrated the Falun Gong exercises, while those in another displayed information about the Chinese Communist Party’s persecution of Falun Gong.

In order to comply with government regulations on social distancing, the different sections were spaced far apart and cars displaying information were placed between them. Nevertheless, the parade was striking. 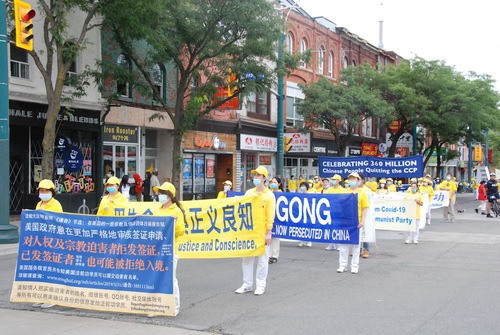 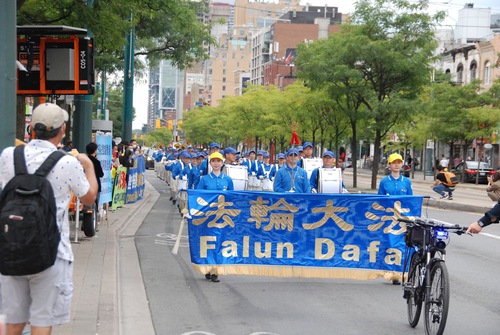 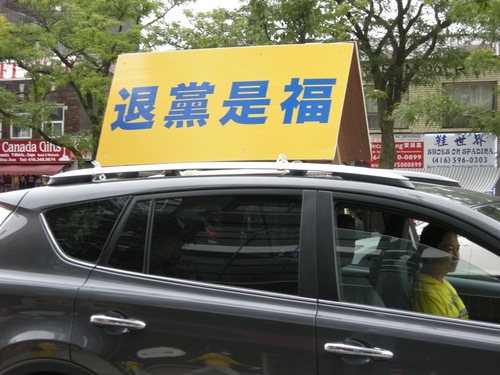 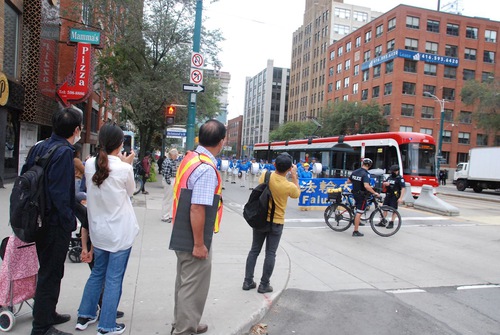 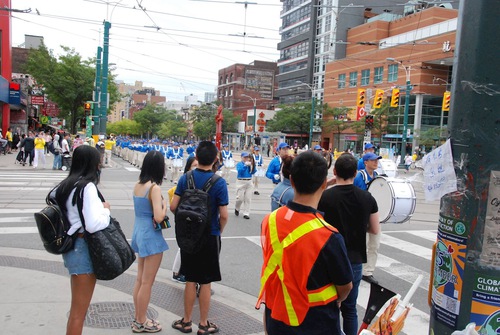 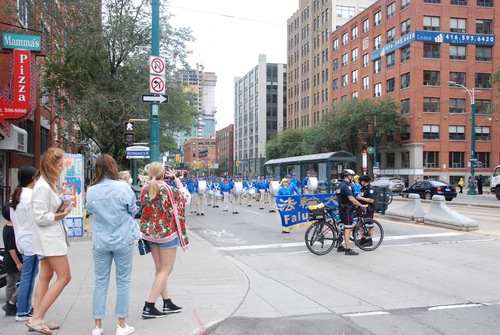 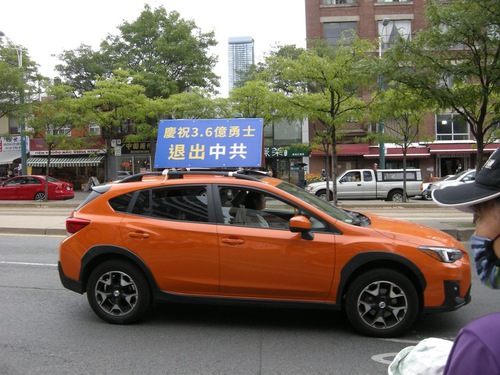 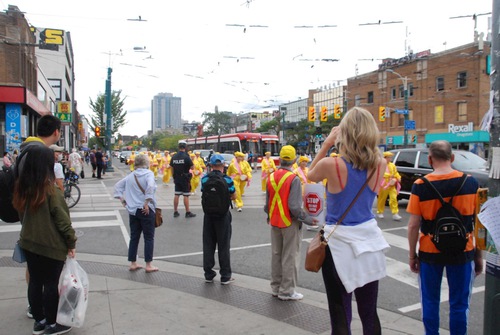 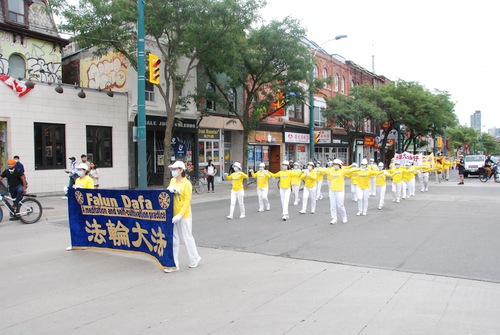 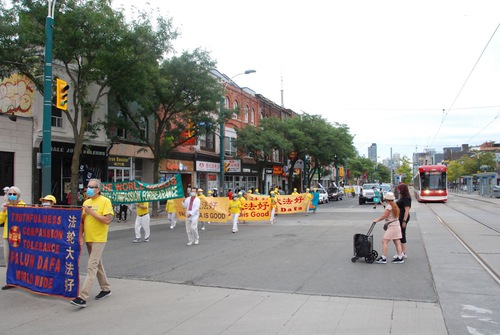 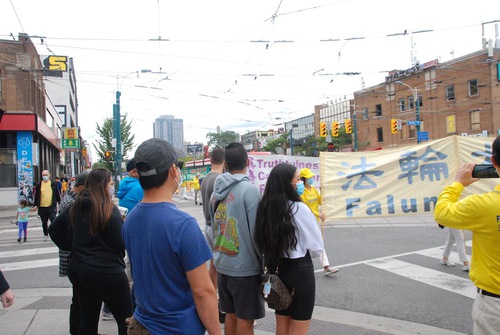 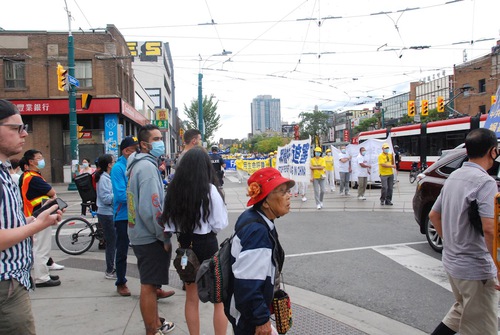 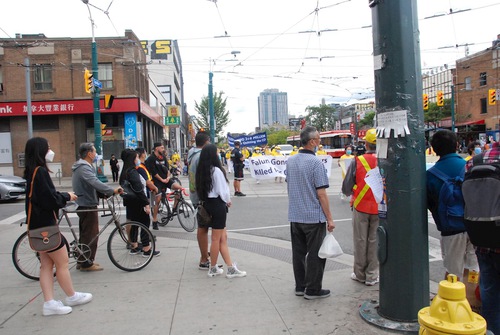 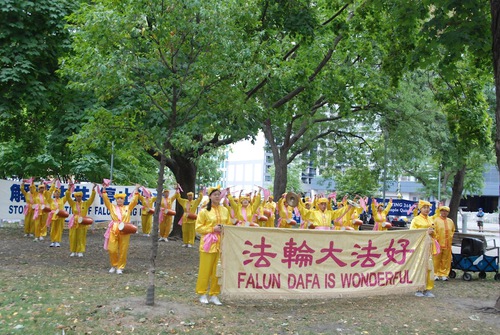 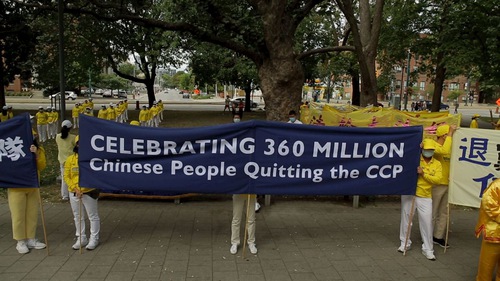 Falun Gong practitioners in Toronto held a rally and parade themed “Stop the Persecution and Disintegrate the CCP.”

“I Want to Speak Up for Justice” 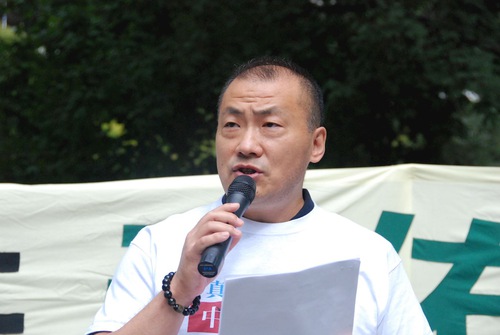 Shao Bing spoke at the rally and publicly renounced his membership in the CCP.

Shao Bing from Liaoning Province, China spoke at the rally and renounced his membership in the CCP using his real name. He is a manager at a finance company. Unaware of the Chinese Communist Party’s true nature, he said he signed up to be a member.

“When I was in China, I was persecuted many times,” he said. “I owned a finance company. The CCP is very shameless. When your business is doing well and earning profits, they take away your wealth through various underhanded means, such as [declaring] your company illegal and forcing you to close up shop. Many people in my industry have had similar experiences.

“My wife has also suffered many injustices when she worked in a state-owned enterprise in China. For example, when asked to join the Party, she turned down the offer. As a result, she was demoted from a senior position to a worker at the bottom level. If you don’t give Party officials gifts or pull strings, you will be persecuted. What I went through made me realize how corrupt the CCP is.”

Shao Bing added, “Under the CCP's rule, the Chinese have become very unsympathetic to others. Relationships are built on money and power. When the regime thinks you are useless, it will abandon and persecute you. Worse still, it will kill you. I love my country, but it should not be ruled by the CCP. China should have democracy, equality, and freedom. Today I publicly announce my withdrawal from the Party because I want to speak up for justice. As long as I’m able to, I will continue to speak out.”

He wanted to tell Chinese citizens, “Speak the truth, do good deeds, restrain yourself and be tolerant of others, seek justice, aspire for peace, and quickly quit the CCP. I sincerely hope every kindhearted Chinese will make a wise choice and choose a better future for themselves.”

At Ease after Quitting the CCP

Zhang Yucheng said he felt great after he publicly quit his membership in the Communist Youth League and the Young Pioneers, the CCP’s youth organizations.

Mr. Zhang from Tieling City, Liaoning Province, was a farmer back in China. He decided to renounce his membership because he had lost faith in the Party after it looted the personal wealth of his sister Zhang Yuxin and she was beaten to death.

“Society in China is too corrupt under the CCP's rule. They say one thing but do another. We were taught in elementary and middle school that humans devour each other in capitalist countries. But after moving to Canada, I learned that this is completely untrue,” he said.

Mr. Zhang said CCP officials at the grassroots level conspired to malign his sister. She was put through all kinds of torture when she appealed for justice, and in the end she was beaten to death. Before he left China, his 81-year-old mother, who saw through the ruthless nature of the CCP, told him to go as far away as possible and never to come back.

Living by Truthfulness-Compassion-Tolerance to Be a True Chinese Citizen

Cai Hong from Sichuan, China was one of the women who publicly quit the CCP during the rally. She said, “I have lived in Canada for six years. When I learned about the persecution of Falun Gong, I understood that we had no freedom of speech or belief in China. I want to live by the principles of Truthfulness, Compassion, and Tolerance and be a true Chinese citizen.”

She also noted the significance of her decision to quit the Young Pioneers during the rally. “I think Falun Gong is great because practitioners treat people sincerely and they are very kind. I think the practice benefits oneself as well as others,” she said. 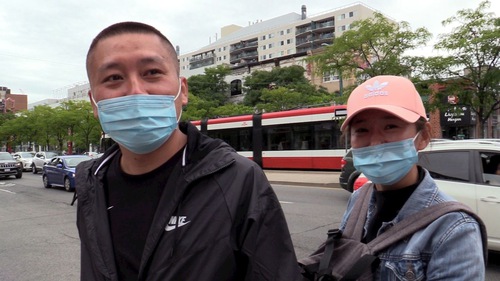 Mr. Cai (left) from China and his friend watched the parade.

Mr. Cai moved to Canada from China two years ago and watched the parade with his friend. He said, “I was blown away by this parade. You can’t see parades like this in China, especially one organized by Falun Gong.” 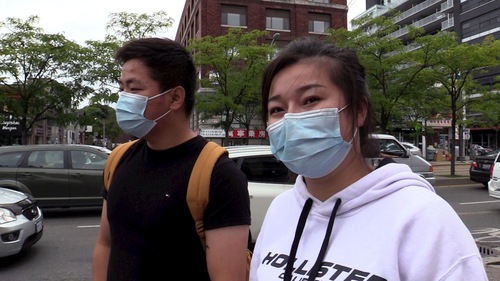 Ms. Liu from China said she was very impressed by the parade’s grandeur. She was surprised by the positive message presented by Falun Gong, which was in stark contrast to the CCP’s portrayal of it.

“I see police cars clearing the way for the parade. It shows Falun Gong is lawful and respected in all countries except China,” she said. When she learned that the purpose of the parade was to encourage Chinese people around the world to quit the CCP, she said, “What you say is right. We have to follow the right path so humanity can thrive and prosper.”

Chinese People Should Have Democracy

Dorothy Yeh is Chinese and moved to Canada with her parents when she was a child. She now works in an administrative position at a government department in Toronto. She wanted to see the entire parade, so she sat by the road.

“This parade looks so good and peaceful. I know the main theme is ‘Stop The Persecution and Disintegrate the CCP’. I think this is a great message. People must know about the atrocities the CCP has done to Falun Gong practitioners. China is ruled by a dictatorship, and that is not right. Chinese people should have democracy, and that’s why I think it’s time this persecution ends,” she said.

Now Is the Time for These Atrocities to End 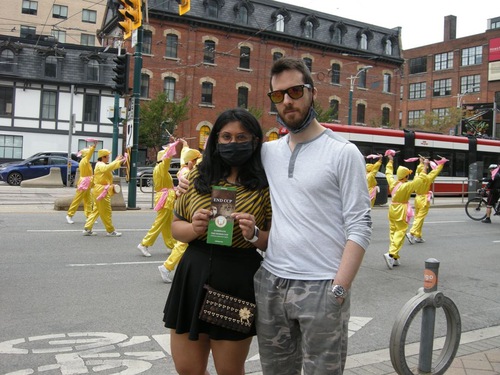 Patrick Horan, a concept animation artist, watched the parade with his friend Esha Naik. He said, “I absolutely oppose the CCP’s persecution of Falun Gong practitioners. Now is the time to end this persecution and to bring down the CCP globally.”

Esha is from India and also works in the animation industry. She said, “I dislike communist ideology and detest the CCP even more. It lies to its own people and the whole world. This led to the spread of the coronavirus globally. If it did not cover it up, the virus would not have spread so quickly outside China. I support you.”

The CCP Must be Disintegrated 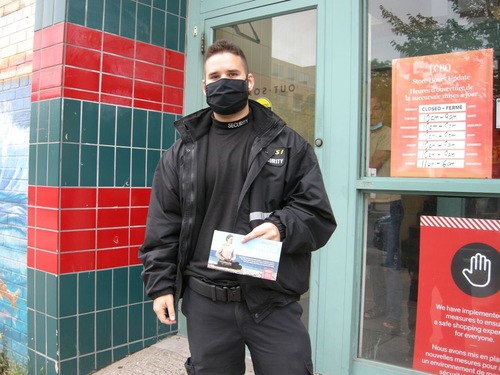 Mr. Gosb Aguvlo from Columbia is a security guard at a large company in Ontario. When he heard the music, he rushed to the door to see the parade. He praised the traditional performances.

He learned that Falun Gong is practiced by people in over 100 countries and regions but is persecuted in China. After learning how practitioners in China are imprisoned, tortured, and even killed for organs, he said, “These brutalities must end and the CCP must be disintegrated.”

“Parisian: Everyone Involved in War to Defend Humanity”