(Minghui.org) A 72-year-old man serving time for his faith in Falun Gong is on a hunger strike after the prison authorities attempted to force him to renounce his faith – a mind-body practice that has been persecuted by the Chinese communist regime since 1999.

Mr. Liao Banggui, of Suining City, Sichuan Province, was arrested on March 23, 2019, after being reported for talking to people about Falun Gong on a bus. He was sentenced to three years and ten months by the Chuanshan District Court on June 17, 2020, and transferred to the Jiazhou Prison on July 10, 2020.

Mr. Liao’s latest prison sentence was proceeded by repeated arrests, detention, and incarceration for his faith in the past two decades. He served three terms (lengths unknown) at Xinhua Forced Labor Camp and was imprisoned for three years.

While the persecution he suffered in the early years needs further investigation, his persecution from 2011 and onward is reported below.

Mr. Liao was arrested on April 6, 2011 for talking to people about Falun Gong on the street. He was sent to the Beimen Brainwashing Center on the next day and transferred to the Yongxing Detention Center on April 27. He started a hunger strike on April 28 to protest the persecution, only to be force fed for over two months.

The Suining City Court held a secret trial of Mr. Liao in the detention center and sentenced him to three years in Wumaping Prison.

When Mr. Liao was sent to the prison on August 4, 2011, he refused to do a roll call upon arrival. A guard then shocked his soles and said to him, “This is the prison. You have to report to us before you go to the restroom or enter the cell. Or we would deprive you of sleep or forbid you from using the restroom.” When Mr. Liao refused to comply, the guard shocked him again with the electric baton.

Another guard, Liu Bing, later ordered the inmates to tie up Mr. Liao’s legs in a crossed position and forced him to hold a full chamber pot to humiliate him.

Because Mr. Liao did the Falun Gong meditation in prison, he was dragged into a dark room and tear-gassed. He was in so much pain that he couldn’t open his eyes. Tears gushed out and his nose kept running. Blisters appeared on his face the next day. The guards shocked him with electric batons all over his body, from his left ear, arm, thigh and down to the sole, and then all the way up to the right ear.

On another day, guard Li Zhaolei ordered the inmates to tie up Mr. Liao's hands behind his back and then tied his feet together. He was unable to move and suffered excruciating pain. 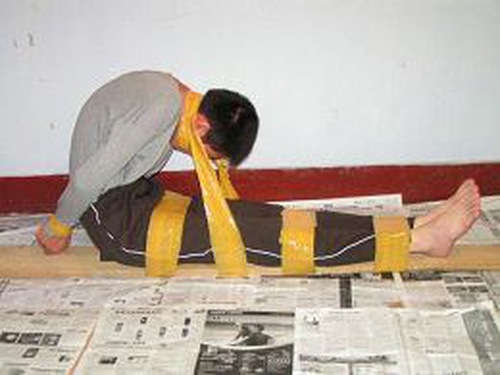 After the Wumaping Prison was shut down in late December 2013, all of the detainees were transferred to the newly built Jiazhou Prison.

Because Mr. Liao did the Falun Gong exercises again, the inmates tied him up and forced him to stand facing the wall. Some of them kicked him, and some twisted his ears and caused them to bleed.

On two more occasions, Mr. Liao was doused with cold water and exposed to the elements in the winter, as well as being shocked on the soles, knees, and calf with electric batons, for doing the Falun Gong exercises.

Although his term expired on April 6, 2014, the prison didn’t release him until April 27.

Mr. Liao went to the local police station on October 17, 2016, to request the return of his Falun Gong books and a photograph of Falun Gong’s founder, which had been confiscated on September 21, 2016. Three officers pushed him out of the station. One of them got a canister and sprayed Mr. Liao in the face.

Mr. Liao turned his head to avoid the spray, but it hit him behind his right ear. He felt a burning, itchy sensation and tried to wipe the spray off, but then he started to bleed. The blood seeped down his neck onto the collar of his shirt.

Mr. Liao was arrested two more times on June 26 and October 11, 2018, after being reported for talking to people about Falun Gong on the bus.

The police forcibly collected his blood sample after the June arrest and kept him at Yongxing Detention Center for weeks.

He was detained for 50 days after his October arrest and locked to a bed for two days. He had to rely on other people’s help to relieve himself when he was locked up.

Related reports:Sichuan Man in His 70s Sentenced to Prison for Talking to People about Falun Gong

“Two Women, Including One in Her 80s, Interrogated for Talking to People about Their Faith”