(Minghui.org) Falun Gong, also known as Falun Dafa, is an ancient spiritual discipline based on the principles of Truthfulness-Compassion-Forbearance. Since the Chinese Communist Party (CCP) started persecuting the group in July 1999, many Falun Gong practitioners have been imprisoned and tortured for refusing to renounce their faith.

This report focuses on the persecution of Falun Gong practitioners that took place between March 2018 and late 2019 at Jilin Province Women's Prison located in Changchun City, Jilin Province.

In March 2018, the prison started to force those practitioners who refused to renounce their faith to sit on a small stool without moving for long hours. While the same torture method has been used in the prison before, the guards intensified it and extended the torture period this time, in order to increase the practitioners’ suffering.

Practitioners were forced to sit on a stool with their legs pressed together and hands on their knees. They had to sit for 18 hours, from 4:00 a.m. to 10:00 p.m., and were only allowed to use the restroom four times a day. They were not allowed to wash themselves or wash or change their clothes. They were also deprived of the right to call or receive visits from their families. 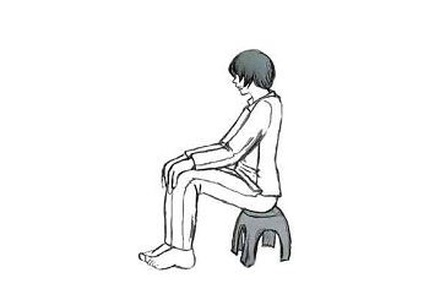 Prison guard Gao Yang instructed inmates to give two cups of water and a little bit of rice and vegetables every day to practitioners who refused to be {transformed}}. Guard Gao ordered to flush the remaining food down the toilet, rather than giving them to those practitioners. This caused the pipes to clog and the prison had to repair them. The practitioners were also not allowed to buy anything to eat, causing them to become weak.

As the practitioners were not allowed to wash themselves or their clothes, they started developing body odor due to the hot weather, and the inmates would often curse at them for the smell.

Ms. Fu Junqiu of Jiling City was forced to sit on a small stool for 18 hours a day when she refused to give up her belief, leading her to become weak. She developed high blood pressure and low blood sugar. She was in pain and often woke up from nightmares. She developed insomnia and slept only two to three hours a day. She also had severe heart disease. She was so weak that she needed people’s support while walking.

Ms. Fu was also not allowed to take showers or do laundry. The inmate who was monitoring her humiliated her because of her body odor. The inmate also forced her to watch videos slandering Falun Gong.

Ms. Wang Juan of Nong'an County, Changchun City, was made to sit on a small stool upon arriving at the prison in September 2018. When she refused, guard Gao ordered four inmates to pin Ms. Wang down and spray her face with chili water.

On May 8, 2019, after Ms. Yang Hongyan of Jiling City refused to sit on the small stool, several inmates were instigated by Gao to flip the stool upside down, lift Ms. Yang into the air, and throw her onto the legs of the stool.

After a few throws, Ms. Yang ached all over and collapsed to the ground. Gao then ordered the inmates to carry Ms. Yang to the bed and cuffed her left hand and right leg to the bed, leaving her unable to move. Gao also instructed the inmates not to give food to Ms. Yang.

That night, the inmates monitored Ms. Yang and had to clean up for her if she needed to relieve herself. One inmate verbally abused Ms. Yang while another threatened to use Ms. Yang's clothes to soak up her urine.

Gao forced Ms. Yang to sit on the small stool the next day after unlocking her handcuffs.

In the spring of 2018, Ms. Yang's mother was critically ill and wanted to see her for the last time. The prison authorities rejected the request, with the excuse that Ms. Yang didn't sign the guarantee statements. The mental distress caused severe heart problems and chest pain in Ms. Yang.

Beatings and Forced to Stand

Ms. Xing Shuhua, in her 60s, was dragged to the restroom several times by an inmate and beaten up for refusing to be transformed.

Gao forced Ms. Lian Jinhua to stand for 18 hours every day when she refused to memorize the prison rules. After standing for more than 10 days, Ms. Lian's legs were swollen to the point of looking shiny. Gao instigated inmate Wang Lina to persecute Ms. Lian, who used various excuses to humiliate and curse her. 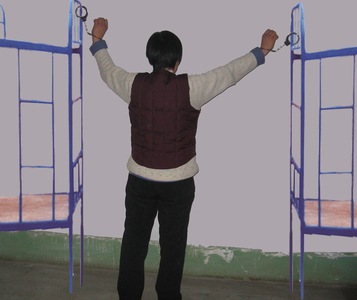 Torture re-enactment: Handcuffed to bed and forced to stand

Ms. Lian was later transferred to another cell shared with a criminal who had previously beaten practitioners Ms. Jin Guizhi, Ms. Zou Shuyan, and Ms. Jin Yan when they refused to be transformed. The criminal hit and cursed Ms. Lian, and didn’t allow her to sleep, causing her health to deteriorate.

When Ms. Liu Jianying of Yushu City arrived at the prison in March 2019, she had shown some mental disorder that was caused by the persecution in a detention facility. As Ms. Liu refused to eat, due to health reasons, the inmates often beat her and cursed at her in the middle of the night, waking up others in the cell. This environment caused Ms. Liu's mental disorder to worsen.

Ms. Liu was later transferred to the prison hospital and four inmates were assigned to monitor her. At the hospital, two inmates often hit and cursed Ms. Liu. One of them scratched Ms. Liu's face, causing her to bleed. However, when other inmates asked what happened, the inmate said that Ms. Liu had scratched herself.

Other practitioners who have been persecuted in the prison include: