(Minghui.org) Practitioners from Mountain View in the south of the San Francisco Bay Area raised awareness of the Chinese Communist Party's (CCP) persecution of Falun Dafa by driving a convoy of cars with display boards on top on August 1, 2020. They drove by shopping centers and Chinese supermarkets in Mountain View and Palo Alto. 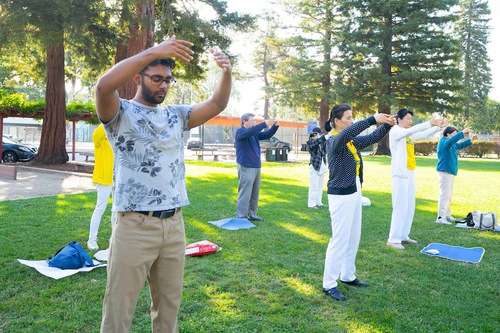 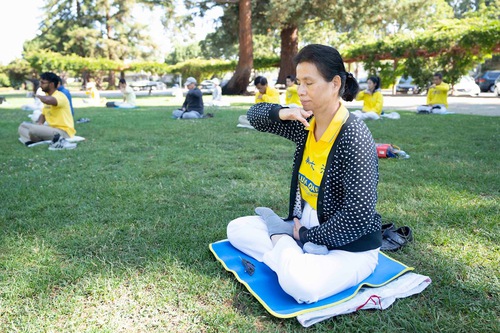 Practitioners do the Falun Dafa exercises in Mitchell Park in Palo Alto. 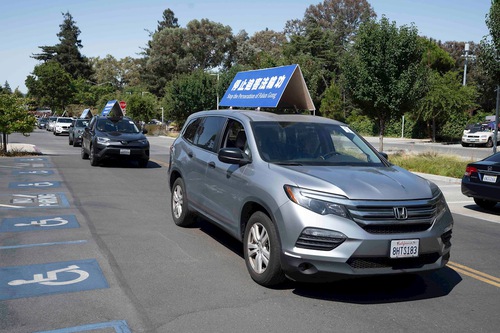 The fleet of cars sets off from the park. 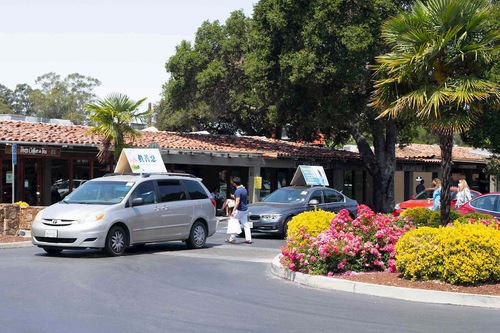 The cars pass by a shopping center. 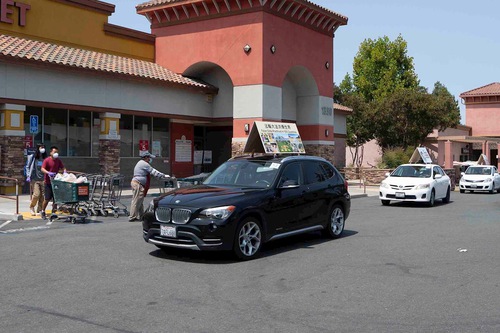 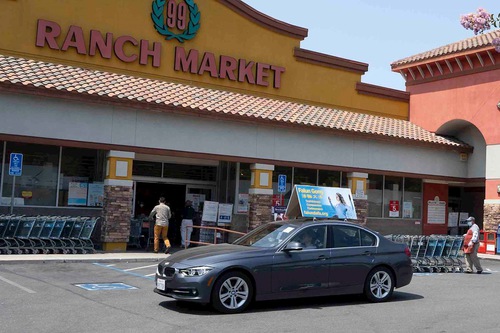 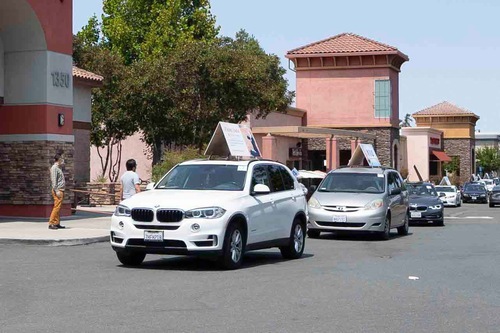 The car convoy passes by a Chinese supermarket. 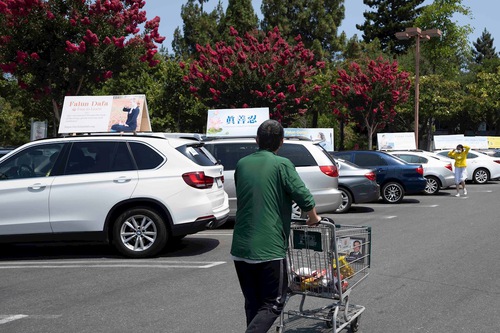 A customer at a Chinese supermarket reads the information.

Practitioners began the morning by practicing the exercises in Mitchell Park and handing out informational materials to people. Then they got into 12 cars with boards reading, “Stop the Persecution of Falun Gong” and “Falun Dafa is Good.” They drove the fleet of cars through various downtown areas of the San Francisco Bay Area. 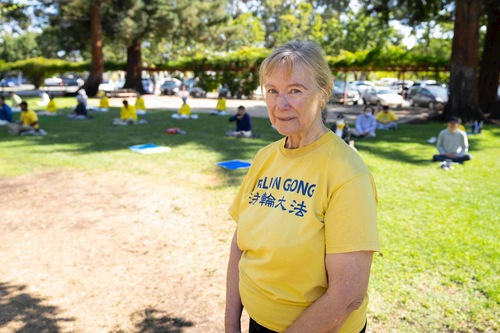 Ms. Diana Mathias from San Jose came to support the convoy by distributing informational materials and talking to people.

Diana participated in a Tai Chi workshop in 1998, and the instructor was Chinese. The instructor visited China that year, and when she came back, she told Diana, “You should read this book.” She gave Diana a copy of Zhuan Falun and taught her the exercises. “I began to practice Falun Dafa just like that,” Diana explained.

“I felt I became more intelligent after I began practicing Falun Dafa,” Diana continued. “My relationship with others become more harmonious. I pay more attention to improving my character.”

She said the car parade would attract people’s attention. “If people are deceived by the CCP, the information will help them realize that,” Diana said. “Falun Dafa is very good and they might want to know more about it. We like Falun Dafa and we feel very good after practicing it. They probably will like it too.”

“Even if they only see the name of Falun Dafa, if they search for it online after going home, they will find out how good Falun Dafa is and they might begin practicing it as well.”

Many People Now Want to Quit the CCP

Ms. Xiong Jianglan from Mountain View participated in the car parade. She said that California was hit especially hard by the coronavirus pandemic and large numbers of people are infected every day. “We need to understand why this happens. This is all because of the CCP’s covering up the virus,” she said.

She said the Nine Commentaries on the Communist Party has clearly explained the CCP’s nature and that the Party will never change. From its cover-up of the virus that led to suffering around the world, she hopes people will see clearly what the CCP is.

Ms. Xiong said the CCP has been persecuting Falun Dafa for 21 years while practitioners have continued to inform the public. “Some people didn’t know the facts in the beginning. Now more and more people know.”

Ms. Xiong also volunteers with the Global Service Center for Quitting the CCP. She said the U.S. government may be planning to prohibit CCP members and their families from entering the U.S. “This is very good news, and it encourages people to quit the CCP,” she said. “People from China are calling in to quit the CCP, and so are Chinese people in the U.S. The certificate from the Service Center is acknowledged by the U.S. government.”

She said practitioners have been talking to people about the persecution of Falun Dafa for many years. She hopes Chinese people will remember, “Quitting the CCP is to stay away from the pandemic. I hope more people will learn the truth.”

Many people came to the park for exercise that morning. Mary from Israel noticed practitioners doing the Falun Dafa exercises while she was taking a walk. She said that their movements were very peaceful. “I know about Falun Dafa because one of my relatives practices it. She often recommend Falun Dafa to me, so I know Falun Dafa is very good,” she said.

Mary had heard that many people in Israel also practice Falun Dafa, and she wanted to learn it as well. She condemned the persecution in China and said the practitioners’ car parade was a good way to spread information.

Jenny teaches Yoga in the park. She said that whenever she's around practitioners doing the exercises, she feels peace and calm. She always remembers the scene and said it was “very beautiful, very peaceful.”