(Minghui.org) More than 200 Falun Dafa volunteer assistants attended an annual camp held July 25-26 in Yunlin, Taiwan, where they studied the Falun Dafa teachings and shared experiences on applying the teachings in daily life and at work, helping other practitioners make progress in cultivation, and other topics.

Many attendees said they gained a lot from the gathering. They found where they could improve and hope to be more diligent in their practice when they return home and provide better assistance to the community of practitioners. 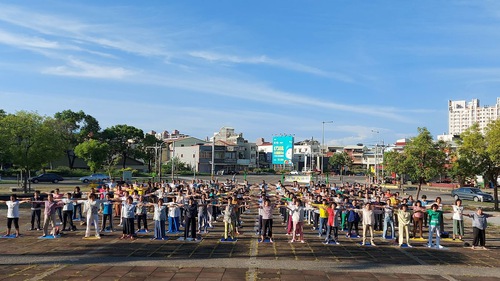 Volunteer assistants from around Taiwan came together and did the Falun Dafa exercises next to Douliu baseball stadium in Yunlin on July 26, 2020.

Su Cheng, a young practitioner, grew up in a big family. He had a troubled childhood, skipped school and wanted to commit suicide. These problems brought on headaches that could not be alleviated after taking two painkillers. However, things changed drastically after he started to practice Dafa.

As he described, the first time he read the main text of the practice, Zhuan Falun, “It answered all the questions I had from young. Master Li explained everything in plain, simple language. I once thought of taking my life because I felt no one could understand me, but this book knows my problems.” He has been following the teachings since then, living by the principles of truthfulness, compassion, and tolerance.

He said, “I became a cheerful person and got along better with my family. A good friend who grew up with me told others, ‘You have to believe in Zhuan Falun. Su Cheng has truly changed a lot.’ My university classmate also said, ‘Su Cheng has changed. He used to be a difficult person to deal with. Now he can talk to others kindly.’”

Su went from a truant to pursuing a PhD. “Many people were surprised. It was a miracle,” he said. His parents did not support his practicing Dafa in the beginning, but they changed after seeing the changes in him and recommended that people give it a try.

Su, who currently works in a media company founded by practitioners, shared his journey of starting a regular Fa-study group in his department at work as he realized the importance of being familiar with the teachings. He said it was grueling in the beginning and that only a few co-workers joined in. But he did not give up.

Gradually, more and more people came as they benefitted from the group environment. Often at least 90% of his coworkers attend the study sessions. He observed that without a good grasp of the teachings, working conditions were less than ideal. “After everyone got into the habit of studying the Fa together, the whole body was able to share understandings and set higher standards for themselves. Work efficiency increased by several times,” he said.

Wen Xia from Tainan also spoke about her experiences in creating a group cultivation environment and getting practitioners to memorize the teachings. Because she knew memorizing the Fa would be a great help in cultivation, she invited several practitioners to study the teachings by heart together. It took them around four or five months to memorize all of Zhuan Falun. She discovered that no one made mistakes while reading after that. To encourage others to join, she and another assistant took the lead and went on stage to recite the Fa.

According to Wen, practitioners were reluctant to join in at first. But after a period of time, they felt a boost in their cultivation. She shared that a practitioner who is usually quiet went on stage to recite the teachings very fluently when it was her turn. Another practitioner who often stuttered read the Fa clearly on stage and did not make any mistakes. In the end, he sped up in memorizing the book.

Li Hui from Tainan shared how she improved her exercise movements recently. Practitioners in her area felt that at this final stage of cultivation, they should treat the practice seriously and do well in all aspects. They began to look for areas of improvement in doing the exercises. Practitioners attended a nine-day introductory class and again listened to Master’s lectures.

Li Hui said she regarded herself as a newcomer and tried to be as accurate as possible in her exercise movements. She felt a compassionate and peaceful energy field. She mentioned that a practitioner was very uncomfortable when her gestures were corrected by others, but a few days later she was moved by the practitioners’ selfless act and saw her own attachment. She invited practitioners who attended the nine-day class to share their experiences with those who did not so that they would be inspired to pay attention to their exercise movements. Li Hui said practitioners made progress in cultivation through these efforts.

Kai Xin discussed how she established a new practice site. She said people at the previous site had to relocate due to construction. In the beginning, there were all kinds of opinions and some practitioners did not want to move. She studied the Fa and shared her understandings with the group, and everyone came to a consensus. She also encouraged those who do not go outside to do the exercises to join in their group exercise sessions. Together with a few practitioners, they went to familiarize themselves at the new location and found that it was an excellent spot. A school was nearby, as well as markets and other amenities; people could see them doing the exercises and learn about Falun Dafa.

Looking Within Whenever There Is a Problem

Jia Sheng from Zhanghua shared about the importance of looking within for shortcomings. At work, there was a time when he kept making mistakes, often in front of his boss. When he looked within, he discovered that he had not applied the principles of Truthfulness, Compassion, Tolerance at work. He did just enough to keep the job and was attached to financial gain. After changing his attitude, he found that his mind became clearer and he got twice the results with half the effort. He thus received a pay increase.

When he taught a co-worker the Falun Dafa exercises, whenever the latter slacked off or did not make any progress, his first thought would be to ask himself, “Where am I lacking? Otherwise the problem would not arise.”

Not long after he began to study the Fa with the colleague, the colleague suddenly asked, “Can we take a break for a few days?” He realized the problem must be caused by something he did not do well. He immediately recalled that although he did the three things Master required every day, he often finds excuses not to do the exercises outside in the morning. So he started to get up early every morning to go to the practice site for group exercises.

“I approached the colleague to resume our Fa study a week later. He happily agreed, and we finished reading Zhuan Falun together,” Jia said. “In cultivation, even if it is a small matter, we should think about how to improve ourselves.”