(Minghui.org) At a section of the bustling Königstraße street in downtown Stuttgart, Germany, a group of people in sunshine yellow shirts and jackets practiced a tranquil sitting meditation exercise on July 11, 2020. These Falun Dafa (Falun Gong) practitioners from Stuttgart and the surrounding areas were part of an Information Day event to raise awareness of the persecution in China.

A woman stood reading the display boards carefully for a long time. A practitioner walked over to her and handed her a flier with more information about Falun Gong. The practitioner explained that the practice is persecuted in China, and practitioners’ organs are even forcibly taken to sell to transplant recipients.

“Can I sign?” the woman asked about the petition. She wanted to learn the exercises as well and took down the time and location of a group practice site near the local railway station.

A mother and her daughter came over to the information table. The mother said she had traveled to China many times but didn’t know anything about Falun Gong or the forced organ harvesting crimes.

A practitioner told her that Chinese Falun Gong practitioners were forced to have medical examinations and have blood samples drawn after they were put into labor camps and detention centers. The communist regime had built a large database to store the information about practitioners' blood and tissue types so that it could harvest and sell their organs on demand.

“What can I do to help you?” the mother asked. She signed the petition without any hesitation. 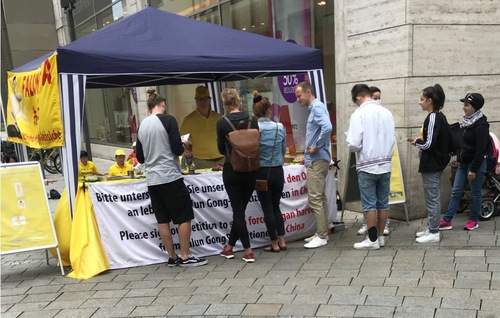 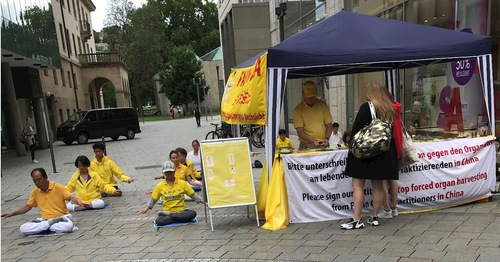 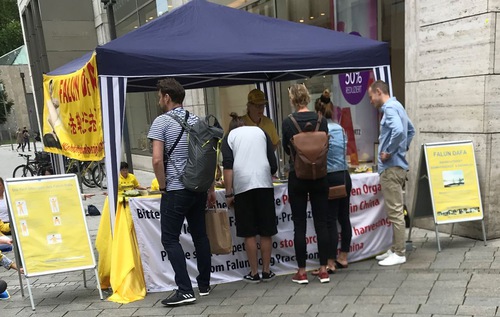 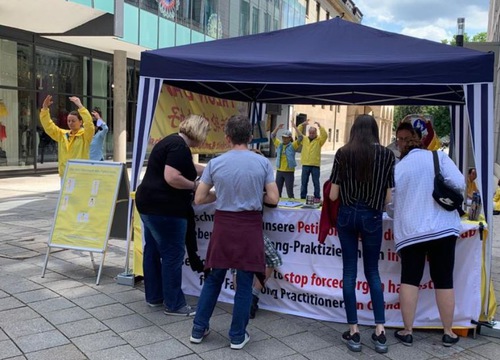 People stop to learn more at the Falun Dafa Information Day event on Königstraße street in downtown Stuttgart on July 11, 2020.

A boy, about nine years old, wanted to practice the Falun Dafa sitting meditation. A practitioner taught him the postures and the boy sat quietly for five minutes. He told his mother that he felt relaxed and his hands were no longer trembling. The mother was very happy and decided to bring her son to learn the entire set of exercises the following day.

Some Chinese people came by the information tent. One man from Guangdong Province chatted with a practitioner for a while and decided to publicly announce his withdrawal from the Young Pioneers, a youth organization affiliated with the Chinese Communist Party. He thanked the practitioner who helped him withdraw from the Party and said, “Falun Gong is really good!”

Another Chinese man said he had read about Falun Gong online: “The Minghui.org website and the Nine Commentaries on the Communist Party. I have read them all,” he said.

One Chinese man came to the tent and asked for two more copies of Minghui Weekly for his mother and his doctor friend.

“Once Incarcerated for Nine Years for His Faith, Hubei Man in Detention Again for Nearly a Year”