(Minghui.org) Falun Dafa practitioners in New Zealand held a rally in the Auckland suburb of Newmarket on August 1, 2020, to raise awareness of the ongoing persecution in China. The practitioners' Tian Guo Marching Band performed heart-stirring pieces, attracting the attention of passersby. 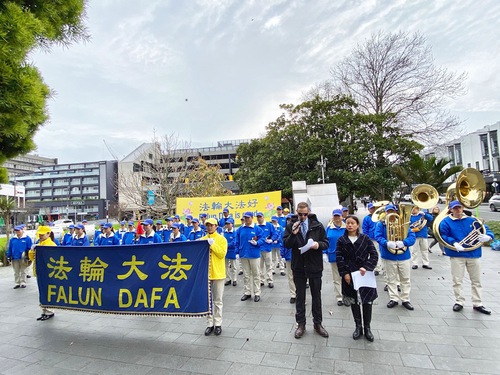 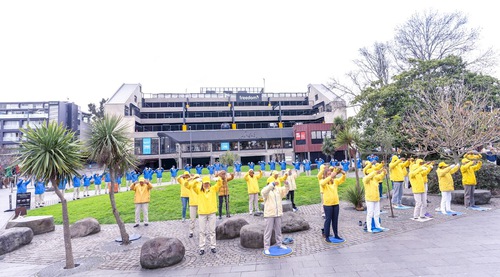 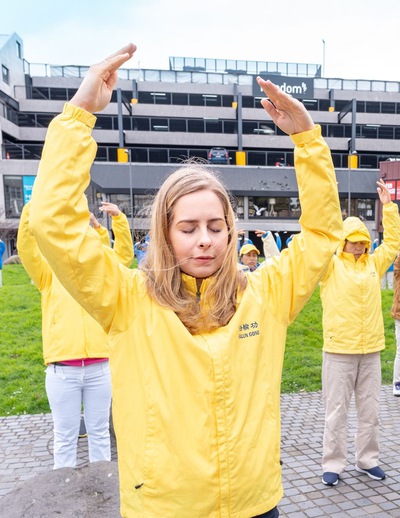 Practitioners demonstrate the exercises and talk to people about the persecution of Falun Gong in China at Newmarket in Auckland.

Perpetrators of Crimes Against Humanity Should Be Brought to Justice 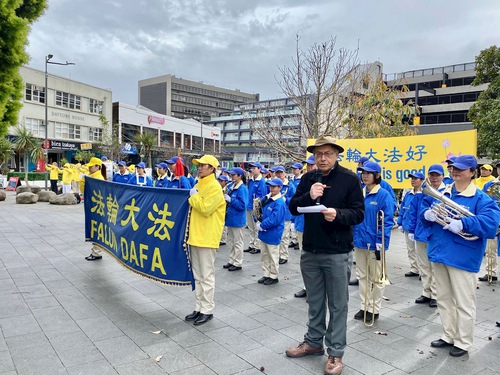 Anthony Brunt, a former Wellington City councilor, spoke at the rally. “I openly oppose the Chinese Communist Party (CCP) and its horrible disregard of human rights, in particular the persecution of Falun Gong, and recently the persecution of the Uyghurs,” he said. “These brutal acts are recorded on file – oppressive surveillance, wanton arrests, harsh prison sentences, torture, rape, taking away organs in the most brutal circumstances, and murder.”

“We cannot let our free society be infiltrated by the CCP, our freedom of speech stifled, our free elections tampered with and undermined, or else our children and their future generations may have to live under such tyranny.

“I have read a lot of literature on the matter and the book on organ harvesting Bloody Harvest: the Slaughter. The reality is so terrifying that we must have strong nerves to face it. It is such a dangerous genocidal campaign and pursuit that is only for profit. It is even trying to export such evil to other countries. The CCP is focused on money and killing, not ethics.

“So that New Zealand doesn’t get involved in any criminal activity or are tarnished by immoral acts so as to let the CCP feel ashamed and change its policies, I have been trying my best to take action, including the following:

• I suggested to the health and foreign minister to stop New Zealand citizens and permanent residents from going to China for organ transplants, and stop them from receiving any subsidies for anti-rejection drugs and treatments.• New Zealand’s largest healthcare group Southern Cross has promised they will not provide any forms of subsidies for fees incurred in overseas organ transplants and medication.• Medical schools in the University of Auckland and the University of Otago have promised: they will not use plasticized models of human organs imported from China.• New Zealand’s largest provider of regional medical services Waitemata District Health Board canceled its collaborations with the Shandong Provincial Health Commission and other medical organizations involved in organ transplants in China.”

“I’m not a Falun Gong practitioner, but I’m an admirer. I’m very happy to work with them to end this evil persecution in China.”

He said the persecution of Falun Gong should have ended much earlier with the perpetrators being brought to justice.

We Cannot Condone the CCP’s Actions 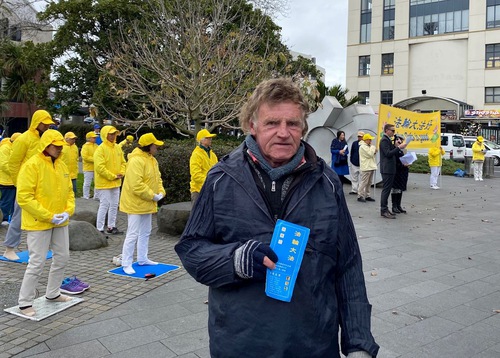 Jerry Wade, a salesperson, said, “I saw reports on organ harvesting. It is unbelievable. Perhaps you already knew what the CCP was like beforehand, but this is a completely different matter. The extent of the brutality has reached new heights. To make practitioners disappear just like that and then take their organs at times even when they are still alive just to sell them for a profit, this is like Adolf Hitler, even worse. I’m shocked.”

“Just a week ago, the local radio station was discussing the persecution of the Uyghurs. I called the station to tell them these groups of people are detained and then forced into slave labor. I believe they are treated just like Falun Gong with their organs being taken too. The CCP has conducted experiments on Falun Gong and they are now using it on the Uyghurs. New Zealanders should be aware of this, not only New Zealand but the whole world.”

“The United Nations and other western countries should come forward and tell the CCP, although we care about our economy, we cannot condone your acts. We care for everyone's lives, equal treatment between humans, not abuse, torture or murder. We want all Chinese to be treated like humans, enjoying their rights, just like in New Zealand,” he said.

“The CCP’s attitude towards the rest of the world is getting more forceful, arrogant and unreasonable. It really makes one sick. They strike fear into their people where other countries wouldn't do such things.”

There Is No Freedom of Speech or Belief in China

Mr. Tang, a Chinese man from Malaysia, used to work in a government department. He is a Christian and said his grandfather fled to Malaysia from China.

“China is our native country but the CCP is bad, as there is no freedom of speech and belief. The heads of so-called churches in China are party officials. True adherents have no power or freedom of speech.”

Mr. Tang said he knows about the persecution of Falun Gong and absolutely believes that organ harvesting is truly happening in China today.

“The CCP will not let people have their rights. In Western countries, there is democracy, like in the US, and there is the House of Representatives, the Senate, President, and the proclamation of laws. You cannot just do what you want, as there is transparency. But it is not like that in China, that’s why the CCP can decide one’s life and death at a whim,” he said.