(Minghui.org) Practitioners in Switzerland held activities in the capital, Berne, on July 18, 2020, to showcase the beauty of Falun Dafa and to raise awareness of the Chinese Communist Party (CCP)’s 21-year-long persecution of Falun Dafa in China. Many people signed a petition condeming the persecution and expressed their admiration for practitioners’ courage, perseverance and sacrifice. Some said they planned to go to a group practice site to learn the exercises. 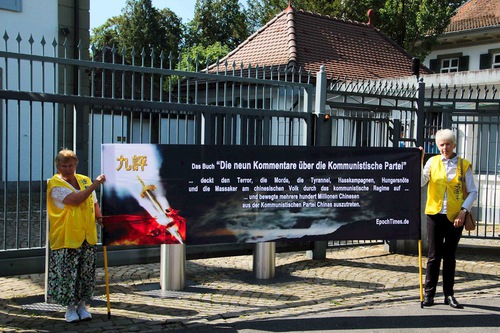 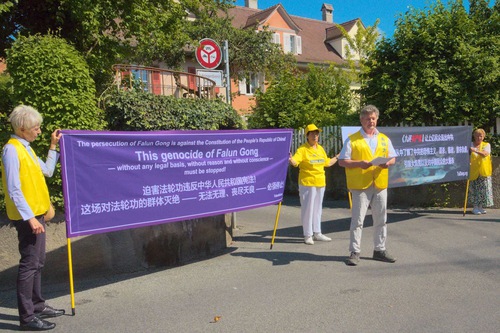 Practitioners protest in front of the Chinese Embassy, calling for an end to the persecution of Falun Dafa in China.

Practitioners arrived at the Chinese Embassy in the morning, where they unfolded banners and read an open letter to the embassy staff and the public. They hope that in Switzerland, a free country, the embassy staff could learn about the persecution, stop being deceived by the CCP’s lies, and withdraw from the Party. They suggested that the staff use their information to help stop the persecution. 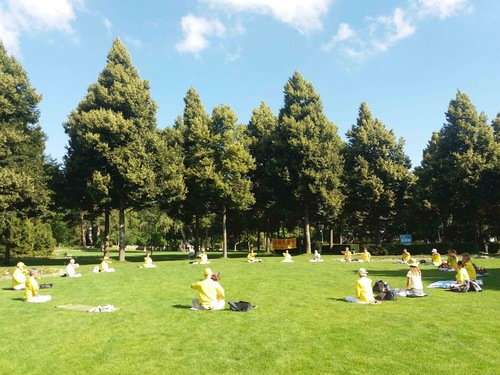 As part of the day's events, practitioners demonstrated the Falun Dafa exercises in Rogsengarten Park in Berne. Some passersby joined them and learned the exercises. 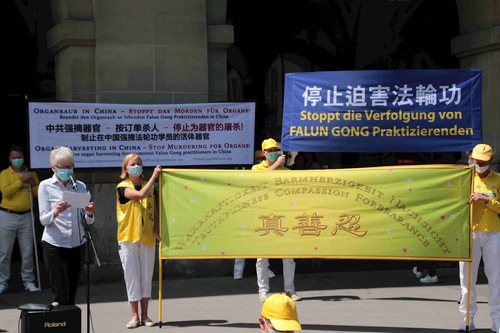 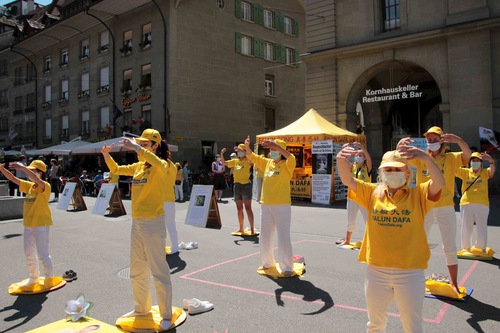 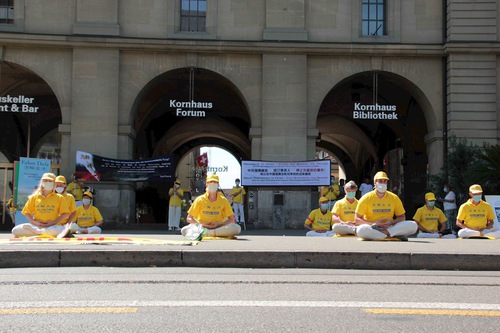 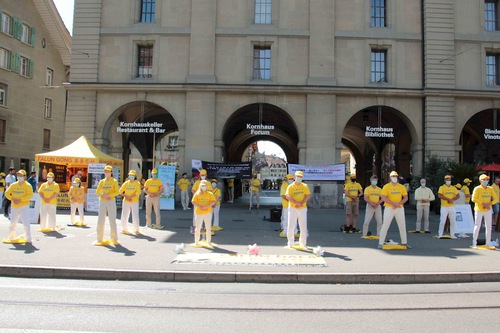 That afternoon, practitioners did the exercises on Kornhaus Square in downtown Berne and talked to the public about Falun Dafa and the persecution. 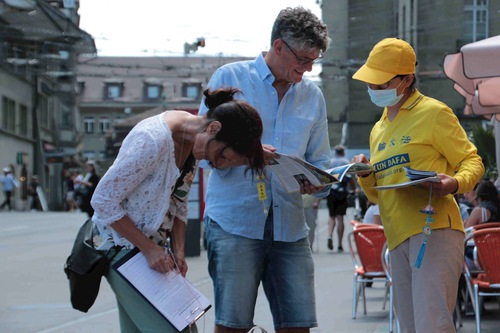 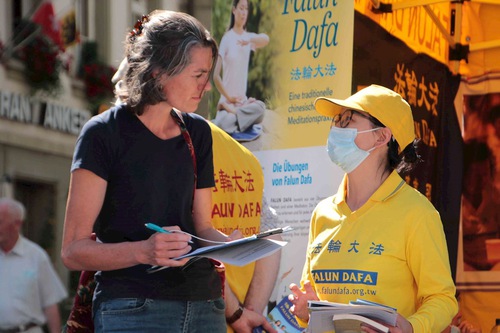 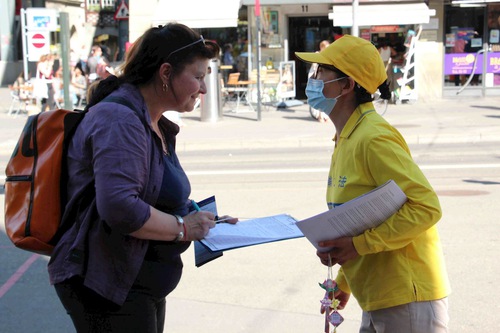 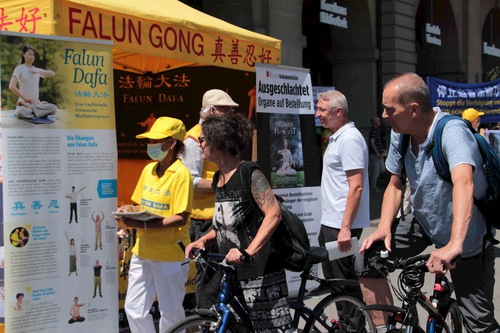 With the onset of the coronavirus pandemic and the implementation of the draconian National Security Law in Hong Kong, people have become increasingly aware that the CCP’s threat relates to everyone.

Falun Dafa Is “Important to All of Us”

Ms. Petra Scheling learned about Falun Dafa a few years ago. After she signed the petition, she asked where she could join the group exercises. She said excitedly, “I want to learn how to practice. I know China has a long civilization. I also know what’s going on there, including what the CCP has done. I feel the world needs Falun Dafa. I understand why the CCP feels insecure about Falun Dafa, as it would bring people great peace. This is extremely precious.

“I feel open-thinking should be the core in our life, as opposed to materialism,” she said. “Materialism will destroy the entire world. Dafa is a very nice and bright way for the Chinese people who are in the midst of the crisis brought about by the CCP. Falun Dafa is a solution, it gives a new direction. We need Falun Dafa. It is very important to all of us. I truly appreciate the activities you held here and other places in Europe.”

Persecution in China is “Heart-Wrenching” 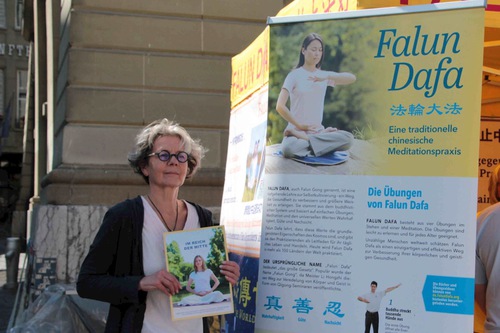 Constanze Frei was a social worker and later became an author. She was very excited to see practitioners' activities. She immediately signed the petition and shared her thoughts.

“I am stunned!” she said. “This persecution is heart-wrenching and it’s gone on for more than 20 years. Those people with conscience [Falun Dafa practitioners] are still held in forced labor camps, and their organs are harvested. This is truly dreadful! I have no words to express my deepest sorrow. I appreciate your being here. The principles of Falun Dafa are wonderful. They should be known by more people and spread widely. Falun Dafa should be practiced in more and more countries around the world. The persecution is groundless!”

Regarding the petition, she said, “I hope the Swiss government will speak out to stop the persecution and take a strong stand. I feel disturbed to think that people keep silent on this matter. We must go to the streets to let everyone know what’s going on. This not only pertains to the Chinese people but also the world's people. They should know what the CCP did to its own citizens. This is the saddest thing in the world! This issue is so serious that we can’t just ignore it. I hope the Swiss government will listen to what Falun Dafa practitioners have to say.”

Other Countries Should Not Be the CCP's Accomplices

Frei also mentioned that with the onset of the coronavirus pandemic, people have begun to think about the CCP's behavior. “Now it’s time for us to wake up and understand what’s going on in China,” she said.

“The world will hear of the unjust treatment of practitioners in China. I hope the Swiss government and other Western governments will consider: ‘How can we do business with the CCP? Have we made ourselves the CCP's accomplices? They should think it through and not be bought off by the CCP,’” said Frei.

She said people can learn from practitioners: “I know practicing Falun Dafa brings a person health and uplifts their mind. I know this practice only brings people benefits. We should all be part of it. I hope people from Switzerland and Europe will also have righteous thoughts, like Falun Dafa practitioners do. You are truly amazing. I’m really happy to see you here.”

Physiotherapist Ruth Schweizer said she had heard about Falun Dafa from newspapers and other information events held by practitioners before. After she signed the petition, she said, “Every signature counts. The more signatures collected, the more powerful. I hope your persistent efforts will bring about changes in China. I feel people expressing their support is very significant, so that practitioners in China will know that they are remembered.”

She said she appreciates Falun Dafa, “It’s very good, very powerful. It can help people keep calm, become peaceful and harmonious. Initially Falun Dafa's founder received awards. However, in China, if a group is well received by the public, then the CCP is fearful.”

Regarding the persecution in China, she said, “This persecution shouldn’t happen. This is outrageous! Torturing people is a serious violation of human rights.” Speaking about the CCP’s killing of practitioners for organs, she said, “This is truly dreadful. It’s murder!”

Saying No to the CCP

As soon as psychologist Michael Sonntag heard about the persecution of Falun Dafa, he signed the petition. He said, “Say 'No' to the totalitarian regime in China. This shouldn’t continue.” He hoped through the signature drive politicians and businessmen will realize that it's not good to do business with such a corrupt system. He said that they should be subject to moral and criminal punishment for working with the CCP.

A physiotherapist who was with him explained why she signed the petition, “I hope to support Falun Dafa practitioners. Give them freedom so that they can live freely in China.” After she learned that the CCP had persecuted Falun Dafa for 21 years, she said, “I feel great about practitioners holding activities to let people know. Please keep up the good work!”

“I Hope More Chinese Will Wake Up”

Frei made it clear that the CCP is not the same as the country of China. “I know Chinese people are also the CCP's victims,” she said. “The CCP's infiltration is just like a spider web, it’s insane. It’s hard for Chinese people to have different ideas or a free point of view. I feel sorry for them. We should help and support Chinese people. I hope more Chinese will wake up and think for themselves. I hope they see exactly what the CCP has done and how it’s been reinforcing its power by controlling people.”

Several new practitioners joined the activities. Anja was one of them and said, “The CCP has spread so many lies. Many Chinese know what the CCP has done to practitioners. I hope to let the world and Chinese people know: Falun Dafa is very peaceful. I’m also here to support practitioners in China to stop the persecution. I hope more people will wake up so that they won’t be deceived by the CCP’s lies and slanderous propaganda. They should learn about Falun Dafa and help us stop this evil.”

Swiss and Austrian practitioners also went to the capital of Liechtenstein Vaduz to demonstrate the exercises. After that, they submitted informational materials to the Prince and the government.

“Austria, Belgium and Italy: Dignitaries Support Falun Gong and Call for an End to the Persecution”

“Gothenburg, Sweden: “I Finally Found You!””